Iowa guard Jordan Bohannon can appear in one more game before applying for a medical redshirt, and that game just so happens to be against the rival Cyclones. 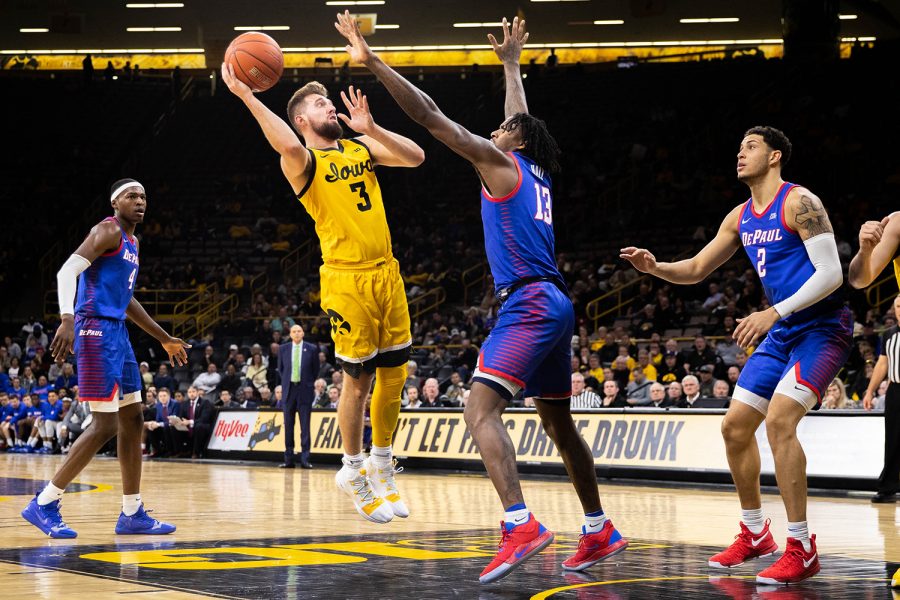 Iowa guard Jordan Bohannon shoots during a game against Depaul at Carver Hawkeye Arena on Monday, November 11, 2019. The Hawkeyes were defeated by the Blue Demons 93-78.

Iowa guard Jordan Bohannon remains noncommittal as to whether he intends to play the rest of the 2019-20 season or apply for a medical redshirt. That looming decision didn’t seem to bother him against Minnesota.

The senior from Marion, Iowa, is the program leader in 3-pointers but made an impact in the passing game against the Gophers rather than from beyond the arc.

Bohannon finished with 10 assists against the Gophers. He didn’t light up the stat sheet in other areas. In fact, he didn’t score a single point. What he did do was feed the ball to forward Joe Wieskamp and center Luka Garza, which is what Iowa needed on Monday.

“He’s just so skilled,” Wieskamp said. “When his shot is not falling, or like tonight when he’s not getting a lot of open looks, he was finding open guys, especially myself. He was finding guys in transition, which got me going. I hit a couple 3’s. He’s just so good at getting other people shots, and I think, in return, shots will open up for him.”

To go along with his 10 assists, Bohannon did not commit a turnover against Minnesota.

Iowa’s next game comes Thursday in against Iowa State in Ames. For Bohannon, the game has an even greater importance than a typical Cy-Hawk showdown.

As he still recovers from an offseason hip surgery, Bohannon can only appear in 10 games this season before he is no longer eligible for a medical redshirt. Iowa State would be Bohannon’s 10th game.

Depending on how he feels after facing the Cyclones, Bohannon will either apply for the waiver and shut it down to return next season or continue to play out his senior year.

“With Ryan Kriener being my best friend, it’s going to be tough if I do decide to shut it down for the season,” Bohannon said. “He’s someone I came in with, and we became really good friends. I’ve been his roommate for four years. We’ve talked about it. It’s going to suck if I do decide that way.”

Iowa State will be Iowa’s 11th game of the season. Bohannon sat out of the Hawkeyes’ Nov. 24 matchup against Cal Poly, so he can play against the Cyclones before making his decision.

That move worked out for Bohannon, who is eager to face the rival Cyclones.

The environment at Hilton Coliseum is one of the most hostile Iowa will have to play in this season. Cyclones fans do their best to make sure Iowa does not feel at home.

“The minute you get there in warmups, you’ve got fans heckling you,” Bohannon said. “Guys are talking about your family members, ex-girlfriends — it’s a pretty crazy environment. But that’s something we love to be in. That’s something we sign up for.”