UI president: Declaring a climate crisis must come with action

In an interview with The Daily Iowan on Monday, University of Iowa President Bruce Harreld declared a climate crisis, but said doing so is not enough unless “concrete action” is taken to address it. 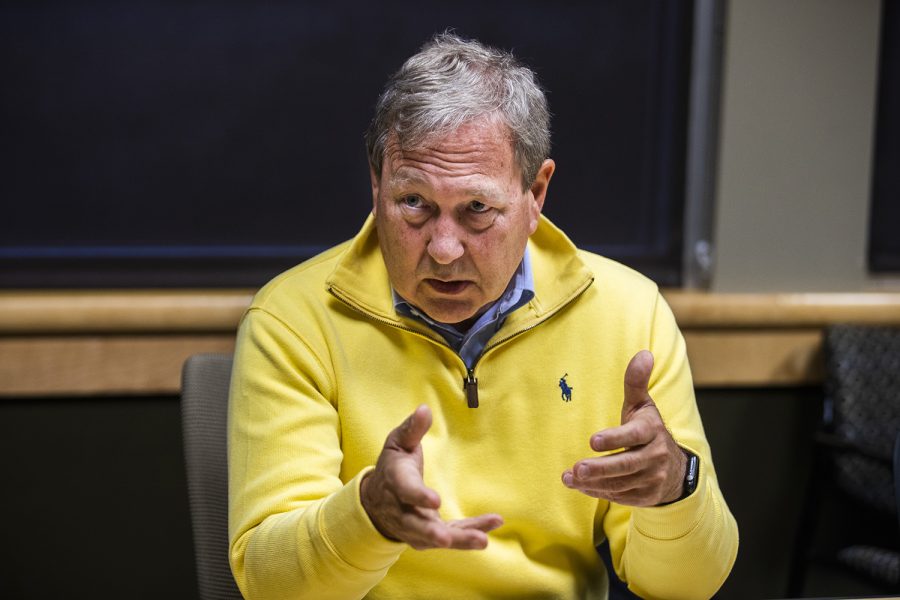 UI President Bruce Harreld answers questions during an interview with The Daily Iowan in the Adler Journalism Building on Monday, Dec. 9, 2019.

University of Iowa President Bruce Harreld said he “declare[s] a climate crisis” Monday in an interview with The Daily Iowan — but he went further to contemplate the UI community’s action to end it.

As institutions such as the University of Illinois declare climate emergencies and the pressure builds for their peers to follow suit, Harreld said a climate crisis is not as important as the action taken to address it beyond just declaring its existence.

He said UI Senior Vice President for Finance and Operations Rod Lehnertz and a group of undergraduate graduate, staff, and faculty leaders have convened over the last several months to address climate issues and answer the “now what?”

“I think it’s the ‘now what?’ that really make a difference. I think that’s what will really stand out,” Harreld said. “I’ve been really worried that we’re going to end up using all this really important energy to make a statement.”

Iowa City climate strikers demanded earlier this fall that the UI pledge to reduce greenhouse-gas emissions, close its coal-burning Power Plant, and commit to 100 percent renewable energy instead of its standing goal of 40 percent.

Harreld said Monday that the university is committed to being coal-free by 2025 — a goal that Lehnertz has said could now possibly be reached by 2023 depending on the partner involved in its potential public/private partnership to operate the campus utility system.

Many universities switch from coal to natural gas, Harreld said, which still leaves a major carbon footprint. The UI will move to biomass instead, he said.

Despite the number of people calling for the UI Power Plant to close its doors, Harreld stressed that it only accounts for around one-fourth of the university’s electricity load.

Harreld said he believes in climate change, but that it’s a much bigger issue of sustainability. Although he hopes the carbon-footprint problem can be solved, Harreld said he fears it’s becoming too late to make a meaningful difference in reversing the threat of climate change.

“… The bigger set of issues beyond that is that we’re consuming things on this planet faster than we can replenish them,” Harreld said.

UI Office of Sustainability and the Environment Director Stratis Giannakouros called climate change “the issue of the century,” stating that it’s not all about carbon consumption. The issue is also around biodiversity, resource consumption, and land use.

“When we think about how we produce energy, how we use water — all these things are opportunities for us to educate students,” Giannakouros said.

Once it’s coal free, the UI wants to substitute the natural gas it burns and think about where it pushes steam around campus and how to reduce the footprint of UI Hospitals and Clinics, Giannakouros said.

“It’s one thing to say that we want to decarbonize, but sitting down in a room and figuring out strategies … is the next step,” Giannakouros said. “We have educational goals, we have operational goals — all those goals are there.”

Giannakouros agreed with Harreld that a climate resolution is symbolic but the hard work is figuring out its action. He said he thinks the UI is up for the challenge because of a cooperative Facilities Management and engaged faculty and students.

Harreld stressed that an empty statement on climate crisis is not enough, unless it leads to concrete action.

“We have a climate crisis,” Harreld said. “But the question is, ‘What do we need to do beyond that?’ And that’s where I think the real important actions are — at the University of Illinois, or Iowa, or other places.”