Whoever is elected president should be someone who understands the American people of now, not yesteryear. 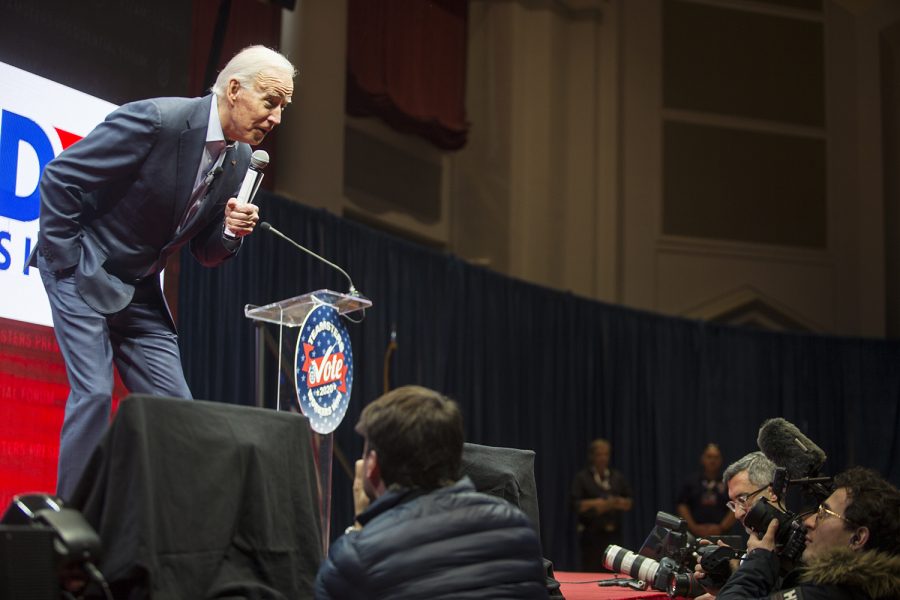 Former Vice President Joe Biden looks at members of the audience during the Teamsters Presidential Candidate Forum in the Veterans Memorial Coliseum in Cedar Rapids on Saturday, Dec. 7, 2019.

The politics of yesterday aren’t built to solve the problems of tomorrow.

Former Vice President Joe Biden is the most prominent result of this problem. A man who has been in Washington for longer than I’ve been alive served alongside President Obama for eight years and is the current frontrunner in the Democratic-nomination polls.

This seems fine, except Biden has no understanding of how to carry himself. He has made several blunders in a short time that has made it clear he is in no way the man who can face President Trump in the 2020 election.

A recent example is his position on marijuana that hasn’t seemed to have changed since the pre-2000s, saying that it might be a “gateway drug” and would oppose legalizing it federally.

There are certainly risks associated with marijuana — as there are with every recreational activity of the like — but opposing its legalization is a mistake. By keeping it in this corner of “some states have it but others don’t,” there’s only going to be more legal trouble with people crossing between state borders. Biden is only showing the age of his ideas.

Then there is the matter of Biden’s eight-day “No Malarkey” Iowa bus tour. While the idea of anyone saying “malarkey” seriously in 2019 is bizarre in and of itself, the actual campaigning of this tour is more off-putting.

First of all, the frontrunner’s departure from the cornfields of rural Iowa to a high-dollar donor fundraiser in Chicago isn’t an assuring political move. What does it say to the people of Iowa when he says that he is hoping to win them over, then leaves them in order to pal around with rich lawyers a state over?

Then there’s the matter of what happened at one of the stops along Biden’s bus tour.

Biden was confronted by an Iowan farmer who claimed that the former vice president sent his son to Ukraine and was “selling access to the President,” as well as saying that he was too old to run for office. Biden retorted this by challenging the man to pushups, running, and calling the Iowan a “damn liar.”

Is this the man trying to convince the nation that he can face Trump head on?

I don’t mean to disparage Biden’s character, though. As noted above, he has been in politics for generations, and there’s good reason for that. And it’s not as if he’s the only out-of-touch politician running for the Democratic nod.

Billionaire Michael Bloomberg has raised idea of making a sin tax against sugary drinks to target low-income people. Trying to corral a massive swath of the population like cattle into doing what you believe to be best for them does not seem like an idea that is going to win over voters.

Sen. Amy Klobuchar, D-Minn., has been accused of horrifically mistreating staffers and allegedly throwing a binder at one. She also has one of the highest staff turnovers on Capitol Hill. Someone who has little to no respect for their subordinates should not hold the highest office in the nation.

But Biden is unique in his lack of understanding of contemporary America, and his numerous shortcomings are evident at every campaign stop and policy position.

Whatever service he has provided in years past, Biden is not the leader our country needs in the decade to come.