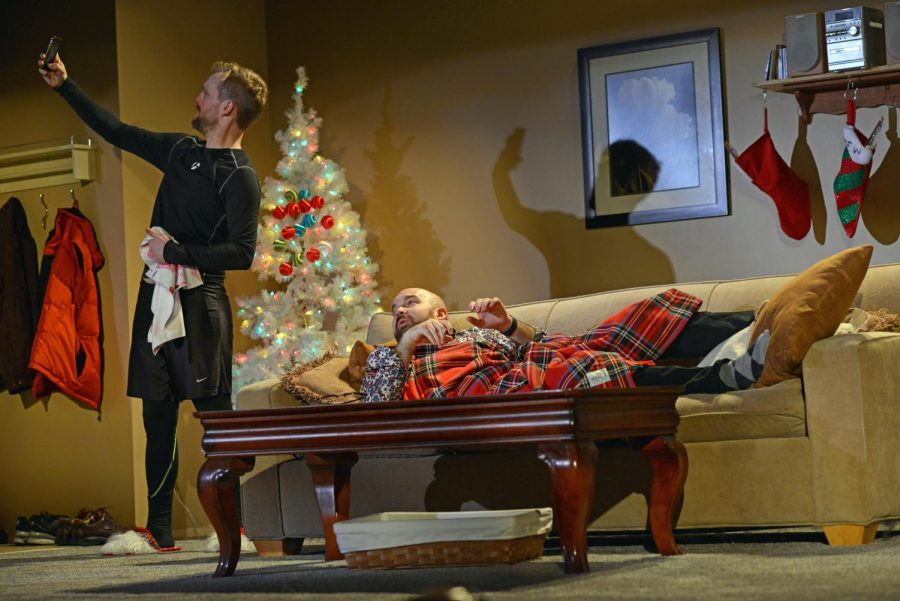 Iowa City’s Riverside Theater is in the midst of running a peculiar play that happens to coincide with the current holiday season: Straight White Men, —  the title speaks for itself.

Young Jean Lee’s play tackles one of today’s current political topics, white privilege, and depicts the blindness of individuals to the upper-hand they have over minorities and of the opposite gender. And what better way to tell this story than to set it during Christmas Eve?

Lee’s play revolves around three adult caucasian men who spend the holiday at their father’s home. There’s Jake (Aaron Weiner), the most successful of the three with a business job, who raves about having a African-American wife with mixed children. With him is academic Drew (Michael Francis), with temporarily employed Matt (Kevin Michael Moore) who still lives with their father Ed (Kevin Burford).

Before the play began, the audience was introduced to two characters more deserving of their own plays, both named Person in Charge (Diviin Huff and Jaime Nevins). The characters pave the tone, critiquing the title and expressing how neither fits the description of the title (one being an African-American woman and the other non-binary).

Related: Almost, Maine is a warm and delicate delight from the Iowa City Community Theatre.

Rap music played as theatre-goers were seated, and the two Persons in Charge apologized if it made anyone uncomfortable, then congratulated them on paying for a moment of privilege.

It’s because of Nina Morrison’s unique direction that the audience is able to have a fun time yet also be moved by characters who in today’s world are quite repulsive. These are childish men creating offensive jokes within their safe space of white privilege, but we’re reminded that although they carry sins of negligence and belittlement, they’re humans who can’t recognize they’re in a position of power, only to notice when it hurts one another.

Much is to be admired about Riverside’s production due to the creatives behind the stage mixing an array of the surreal and the normal. Scenic designer S. Benjamin Farrar creates a living space that most will find themselves returning to for Christmas, yet there’s A Christmas Story-like corny festive nature in the holiday decorations, like stockings and a fake tree, but outside of this staged home we see plastic drapes with layered graffiti, reminding theatre goers they’re currently witnessing a play. The holiday nature is also enhanced by S. Benjamin Farrar’s lighting design who uses Christmas lights to shift scenes.

Straight White Men is a poignant play for today’s cultural climate, where individuals fitting the title’s descriptor may speak over those without voices, such as people of color or of the opposite gender, dismantling them from attaining a position of power. Lee’s play isn’t about sympathizing with these characters, rather than it is about recognizing their inability to do their part in society to create a balance among the disenfranchised.

Editor’s Note: In a previous version of this article, Merric Bower was said to have designed lighting for the show. This was incorrect, and the name has been changed. The Daily Iowan regrets this error.