Democratic state lawmakers representing Johnson County said the UI's pursuit of a public/private partnership for its utility system comes with long-term risks that they fear have not been thoroughly examined. 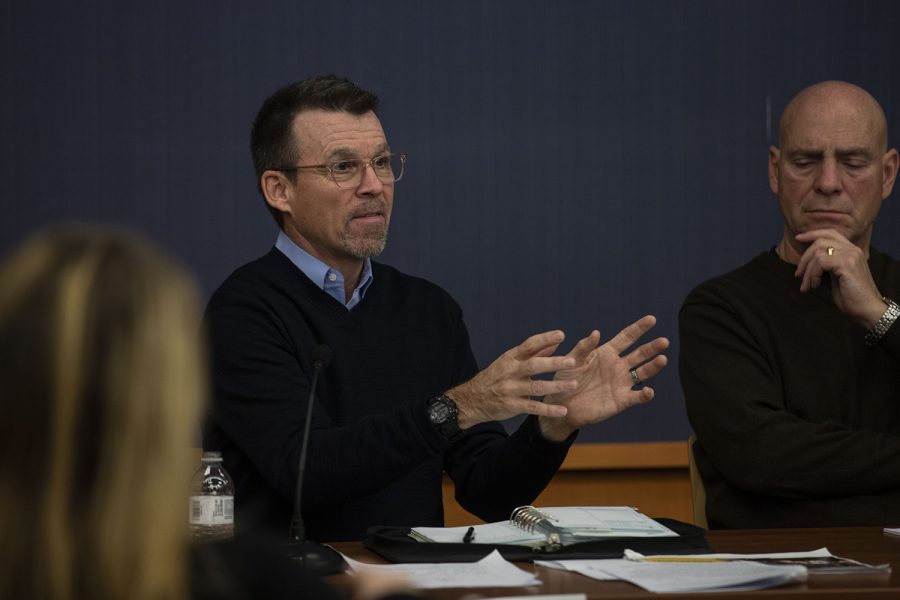 Democratic state lawmakers who represent Johnson County said Sunday that they fear the University of Iowa’s pursuit of a potential public/private partnership to operate its utility system is a gamble that seems to rely on uncertain factors to succeed.

“What it seems to me is we’re borrowing money and we’re taking on the risk of managing it, because we’re not doing a decent job funding this institution,” Iowa Sen. Joe Bolkcom, D-Iowa City, said Sunday at the forum hosted by The Daily Iowan at the Iowa City Public Library. Several area GOP lawmakers were invited to the forum but did not attend.

“We hope that the University of Iowa is not penalized for doing this creative financing,” Bolkcom told the DI, “but I don’t think anybody really knows for sure.”

The university has not identified the amount the private firm would pay in an upfront lump sum for the UI to place into a new endowment to grow over the 50-year term of the agreement, but anticipates that fund will grow to around $3 billion by the end of the deal.

Should the state Board of Regents sign off on the partnership at a special meeting Tuesday, a financier and the operator would invest money to create the concessionaire, a new entity with which the UI would partner.

A nonprofit will be formed to hire a firm, invest the net proceeds and determine allocations from the “P3 utility endowment.” The UI plans to use $15 million annually from the newly created endowment to fund strategic priorities.

At the Sunday forum, the lawmakers said there is a need for oversight with such a long-term agreement.

“There are too many variables, I think, to get locked in for that long a time without some built-in way of checking on the progress or the success or not success of such an agreement,” Iowa Rep. Vicki Lensing, D-Iowa City, said.

A nonprofit board composed of one regent, one Faculty Senate appointee, and the UI senior vice president for Finance and Operations would meet quarterly to review the fund’s operation, hire investment advisers and managers, and set the yearly allocations to campus.

Shared-governance leaders and a budget review board would collaborate to determine how to share the proceeds from the deal.

State Rep. Mary Mascher, D-Iowa City, said she likes the collaborative nature of the plan to allocate the proceeds, as it involves faculty and staff.

“We do care about the quality of the product here and what students get,” she said, adding that without funding for activities and programs that aim to bolster student success, “we’re all going to be hurting and we’re just going to see this continual slide” in the rankings.

Iowa Sen. Zach Wahls, D-Coralville, said that $15 million amount is “interestingly about the same amount of money that the Legislature gave to the state institutions last year with no privatization of the Power Plant.” The Legislature this spring boosted fiscal 2020 funding by around $12 million — $6 million less than the regents requested for their three institutions.

Wahls said he wonders how GOP lawmakers will respond to the potential partnership and feared they may view this deal as a signal that they can provide that amount less in funding to the UI.

While Iowa’s Republican Gov. Kim Reynolds asked the universities to explore such possible agreements, Wahls said, he urged further consideration of the fact that new legislators will be elected over the term of the contract.

“We’ve been told, ‘Oh, don’t worry, they’re not going to do that,’ ” Wahls said of the perception that the Legislature won’t cut funding. “… First of all, we’ve heard that phrase before. And then secondly, who cares about the people who are there currently? This is a 50-year deal.”

Information identifying the bidder and how much money the UI will receive in the upfront payment has not yet been revealed to the public but will be shared when the regents convene Tuesday to consider the deal.

The lawmakers criticized that information-sharing timeline, but UI media-relations director Anne Bassett said in an email that university officials held several forums with the public and with shared-governance branches to discuss the potential partnership.

Regarding why the request-for-proposals process has been private and not publicly shared, she said, “Throughout the entire consideration of a public-private partnership with its utility system the University of Iowa has followed its existing purchasing process. This process, which has been in place for decades, was created to ensure the most competitive bids in order to benefit students, families, and taxpayers.”

Wahls and the other lawmakers agreed that if the state Legislature funded the regent universities sufficiently and matched their appropriations requests, the UI would not need to consider a deal with potentially unexplored long-term consequences.

“I just don’t think that this is the right way to be the steward of taxpayer money,” Wahls said.