Epenesa, Wirfs not focused on NFL ahead of Holiday Bowl

A.J. Epenesa and Tristan Wirfs shut down any speculation that they would sit out Iowa’s bowl game in preparation for the NFL Draft. 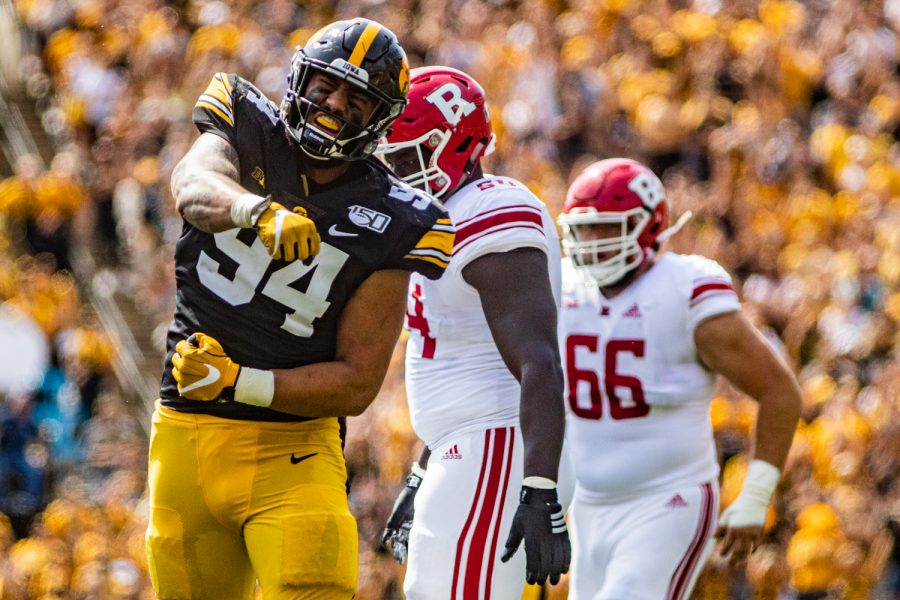 Iowa defensive end AJ Epenesa celebrates after a play during a football game between Iowa and Rutgers at Kinnick Stadium on Saturday, September 7, 2019. The Hawkeyes defeated the Scarlet Knights, 30-0.

A recent trend in college football is for top-tier players to skip their team’s bowl game in order to prepare for the NFL Draft.

Iowa’s Tristan Wirfs and A.J. Epenesa will be exceptions to that trend.

Both players are expected to be first-round draft picks if they were to declare for the NFL, but neither player will going to focus on that right now.

“I think they’re excited [for the bowl],” Iowa defensive coordinator Phil Parker said. “We’re going to play on [Dec. 27], and it’s going to be the last time that we get together as a team. I think everybody is looking forward to that. I don’t foresee anybody saying, ‘Hey, I’m going to drop out because the NFL is there.’ I don’t think that’s going to happen.”

Just last season, the Hawkeyes were impacted by the NFL Draft leading up to their bowl game. Tight end Noah Fant declared for the draft and opted to sit out of the Outback Bowl.

Wirfs and Epenesa made it clear that they will be competing in Iowa’s Holiday Bowl matchup against USC, but whether or not the pair will be back for their senior season is still up in the air.

That will be decided after the season.

“I honestly have no idea,” Wirfs said. “I’ll talk to my mom. I’ll talk to [offensive line coach Tim Polasek]. I’ll talk to Coach Ferentz. We’ve still got another game to focus on. I’ve got other stuff to worry about right now. It’s a realistic thing, but right now, I want to give my full attention to the team.”

Wirfs is fresh off of being named the Big Ten Offensive Lineman of the Year. The way he found out about the award was — like most things that involve Wirfs — interesting.

“It was funny — Coach Polasek called me the night before when the defensive awards came out, and the offensive awards were going to come out the next day,” Wirfs said. “He was like, ‘Have you seen anything?’ And I said, ‘No.’ Then, he was like, ‘Oh, never mind,’ and hung up. Then, I knew something was up. Then, the news came out the next day. I called my mom, and she was tearing up. It was pretty cool.”

That type of recognition makes Wirfs a prime candidate to be one of the first offensive linemen off the board in this year’s draft, but he shot down any speculation of him sitting out the bowl game very quickly.

Epenesa has the same mindset going into bowl season.

The NFL is undoubtedly in Epenesa’s future, but focusing on that will have to wait until after Dec. 27.

“You make it through the whole season with your teammates, with your brothers,” Epenesa said. “I haven’t decided if I’m staying or leaving. I’m just going and playing for the guys with me. I love my program with all my heart, so it’s a tough decision to make.”

Iowa’s matchup with USC in San Diego is one Epenesa won’t want to skip for reasons that have nothing to do with the NFL Draft.

“I know a bunch of guys on USC,” Epenesa said. “There’s a bunch of Polynesian kids on that team, guys that I have played with at camps in high school or that I knew them at family gatherings when I was young. At the Army Bowl, me and Tristan hung out with a couple guys that are going to USC. At the Polynesian Bowl, I saw a bunch of guys that go there. I’m looking forward to it.”