New Jersey Senator Cory Booker told reporters in Iowa City on Dec. 7 that he is frustrated with DNC's artificial barriers to the debate stage, but said he is confident he will be an upset and win Iowa in February. 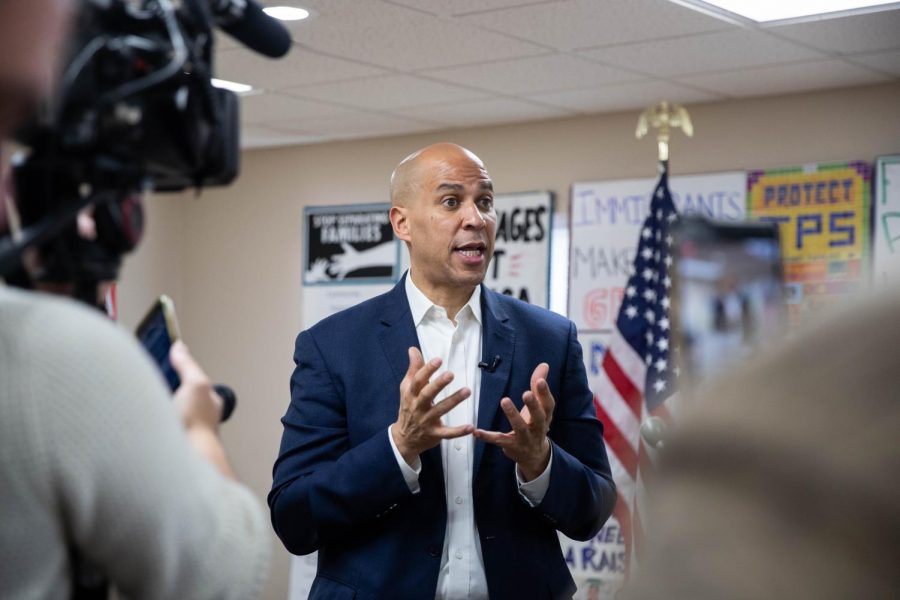 Presidential hopeful Cory Booker urged Iowans in Iowa City to donate to his campaign and to name him as a top-choice candidate if a pollster calls, even if he is not their first choice.

The New Jersey senator has not yet met the DNC’s qualifications to be on the Dec. 19 debate stage. In order to qualify, a candidate needs campaign contributions from 200,000 unique donors and must be polling at either 6 percent in two early-voting states or 4 percent in four national surveys.

Booker told reporters at the Center for Worker’s Justice on Saturday that the DNC’s artificial barriers to the debate are frustrating, because he said it forces campaigns to divert resources away from grassroots organizing.

“At the end of the day, we are running a campaign,” Booker told reporters. “We’re inviting people to join our campaign. We are creating systems that have won here in the past, and although in the past, people who have wanted our metrics say we are doing extraordinarily well … that’s what’s gonna win.”

Booker said that, before he announced his candidacy, he met with former staff from the John Kerry, Barack Obama, and Jimmy Carter campaigns, and he said they all told him to not concern himself with polls.

“All the things we learned, we know our campaign is poised to upset and win here in Iowa, like all the folks who upset before us,” Booker said. “And so I feel this sense of incredible confidence.”

Booker began his “Lead with Love” tour in Iowa on Dec. 5 and spoke on Dec. 6 in Des Moines about his disappointment that California Sen. Kamala Harris was moved to drop out of the race due to her lack of traction. He voiced concerns about the lack of diversity in the Democratic field that is left in the race.

Booker unveiled a plan on Dec. 6 that would invest in infrastructure in rural communities and stop big-ag mergers and farm consolidation of large agriculture companies. This plan is based off a bipartisan bill Booker introduced in the Senate.