Amid disagreement, the Johnson County Board of Supervisors held a public forum on Thursday to hear comments about the proposed Unified Development Ordinance, which regulates soil and water conservation, renewable energy production, zoning codes, and more. 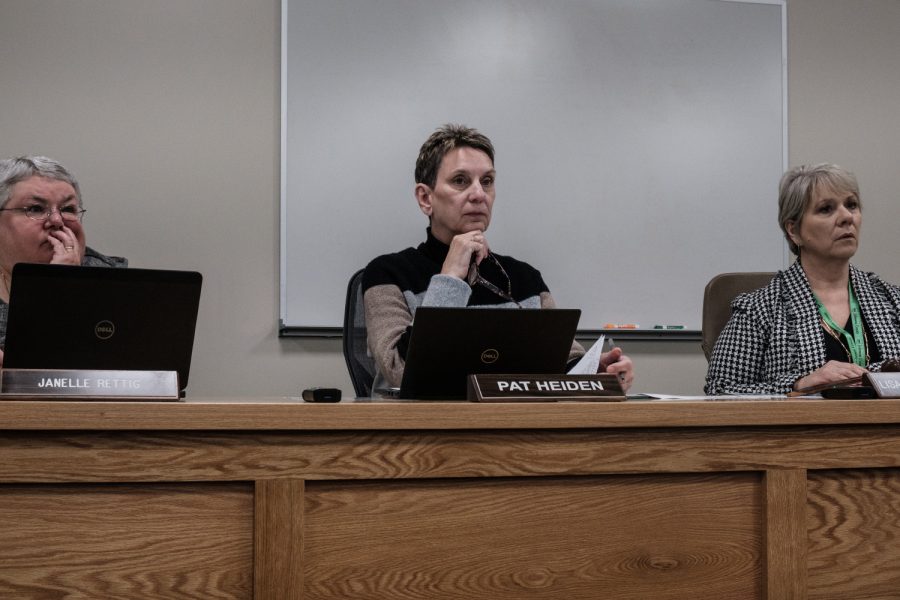 Johnson County Supervisors listen to a speaker during a public hearing to replace the Unified Development Ordinance at the Johnson County Human Services building on Thursday, December 5, 2019. The ordinance plans to add a formal request application for alterations of farms under forty acres. Farmers from around Johnson county gathered to voice their concerns about how the new ordinance could affect family farms.

The Johnson County Board of Supervisors in a 3-2 vote Thursday passed a first consideration of an ordinance that some local residents and farmers have criticized as restricting whether their operations are considered agricultural based on their size and limiting concentrated animal feeding operations.

Twenty-nine community members stood in front of the supervisors at a public hearing Thursday on the proposed updates to the Unified Development Ordinance, which regulates land use in the county’s more rural areas.

The ordinance regulates renewable-energy production, floodplain development, and soil and water conservation. In addition, it includes the subdivision regulations and building and zoning codes to regulate the use and development of land in the unincorporated areas of the county.

Some of the ideas on the current ordinance have been discussed for nearly 10 years, and the current proposal has been reworked for the last 18 months, Board of Supervisors Vice Chair Rod Sullivan said.

Johnson County Supervisor Chairperson Lisa Green-Douglass said the county considered 16 recommended edits from the Planning and Zoning Commission. She said the agricultural community did not want to be subjected to a public hearing on whether or not their operations qualified for agricultural exemptions.

The ordinance proposes introducing an application process for the exemption, which can be obtained by operations smaller than 40 acres.

Agricultural exemption is defined by the Johnson County Department of Planning, Development, and Sustainability as “land, houses, barns, outbuildings, or other buildings or structures which are primarily adapted *and used* for agricultural purposes are exempt from county building and zoning regulations, like setbacks from property lines and building codes.” 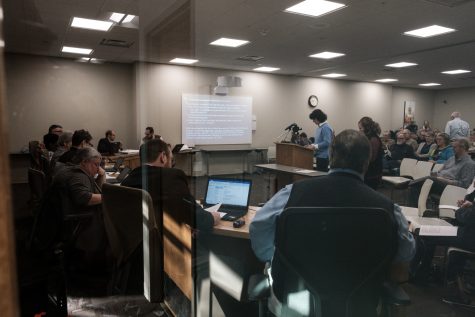 Johnson county residents prepare to speak to the Board of Supervisors during a public hearing to replace the Unified Development Ordinance at the Johnson County Human Services building on Thursday, December 5, 2019. The ordinance plans to add a formal request application for alterations of farms under forty acres. Farmers from around Johnson county gathered to voice their concerns about how the new ordinance could affect family farms.

With the exemption, staff can also request more information from individuals wanting to build a home or animal feeding operation on parcels of land larger than 40 acres, so long as the proposed animal unit density is over 25 animal units per acre of livestock rearing area, the document states.

Green-Douglass said the environmental impacts of the manure from the animals on such operations would negatively affect the surrounding residents in the area and the environment in general.

“The impact upon the air quality and the water quality are undeniable,” Green-Douglass said.

As it stands in the proposal, those with more than 40 acres of land need not apply for outbuildings unless they will be used for animal feeding operations with more than 25 animal units per acre of livestock rearing area. In order to build a house, an application must be provided to show the dwelling citizen is someone involved in the property’s agriculture.

If the farmer owns less than 40 acres, an application must be done to prove there is evidence of the applicant’s history, experience, or education in agriculture; intent or plans to continue using the property for agricultural uses; the structure is primarily adapted for agricultural use; and that the agricultural operation is economically viable, the handout states.

“If you go through an economic liability test like this, beginning farmers can attest that those early years are not high years. They build traction over time,” area farm producer Jon Marner said. “If you make them pass all those tests up front, you’ve killed the farm vision. I think this measure would fail significantly and destroy farms in general in the county.”

Green-Douglass commented on the concerns for young farmers.

“Economic viability doesn’t mean you have to be making money off of this. It just means the operation can continue and won’t fold. If they have the background or training, it’s fine. Economic viability isn’t shutting the door; it’s one of the things considered,” Green-Douglass said.

West Branch farmer Keith Schulthes and his daughter start driving their equipment at 4 a.m. to avoid disrupting citizens on the roads. He hopes the supervisors reflect the same consideration on farmers as he and his daughter reflect on their community.

“Protect our rights. Don’t infringe. Keep reaching out to us. Understand the impact this has on us. We are the major economic driver of this county, and it’s hard for me to imagine why you would want to disrupt this,” Schulthes said. 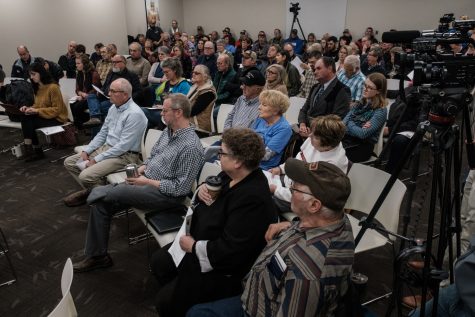 Attendees listen to a speaker during a public hearing to replace the Unified Development Ordinance at the Johnson County Human Services building on Thursday, December 5, 2019. The ordinance plans to add a formal request application for alterations of farms under forty acres. Farmers from around Johnson county gathered to voice their concerns about how the new ordinance could affect family farms.

“No, I’m not going to support it. Slow it down. What’s the rush?” Porter said. “Let’s work with state legislators. I’m sorry if anybody on this board is upset with me, but it is my opinion, and I am entitled to it.”

Green-Douglass said there was point of frustration for her in the deliberations of the ordinance as many public meetings were held prior to address concerns.

“This is where we are at in the process,” Green-Douglass said. “We are trying to do something to reach out and give another opportunity to communicate to folks and let them communicate to us. At any time of year it is going to be something. Do we just not do it?”

A lot of the changes in the ordinance actually help young farmers, Sullivan said.

“The major changes aren’t going to be for farmers. They will be in terms of housing development. Most farmers will not see a big difference,” Sullivan said. “This ordinance is 299 pages long. People were fighting about one page. I think it’s important to focus on all the good things that are in the in those 299 pages.”