The UI Office of Sustainability and the Environment has moved its office location to Jessup Hall. The move comes as a result of plans to raze the UI Communications Center, the office's old location. 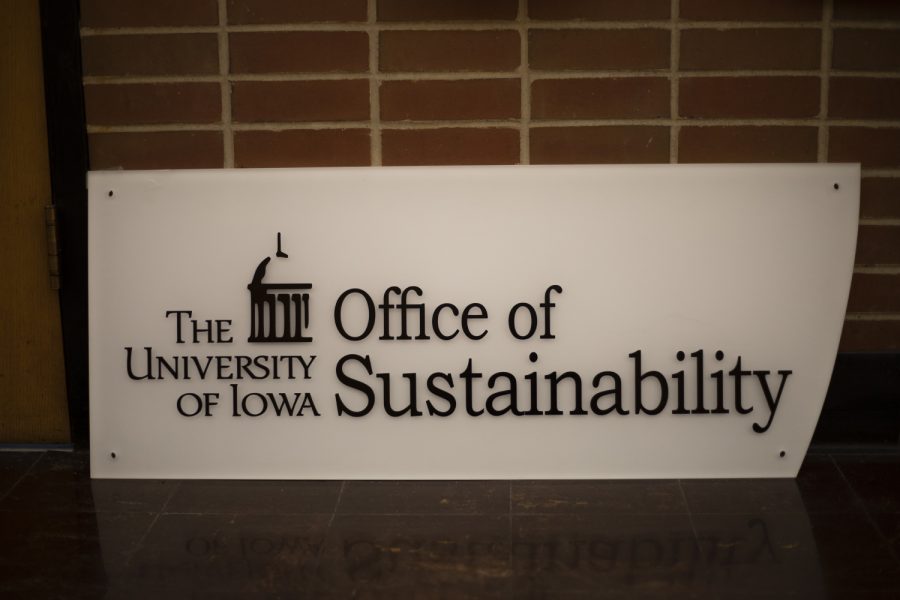 The sign for the Office of Sustainability sits outside its new location on Tuesday, Jan. 29, 2019. The office recently moved to communications building.

The University of Iowa Office of Sustainability and the Environment moved its office to Jessup Hall Dec. 2 in an effort to be more accessible to students on campus.

The office was previously located in the Communications Center, which the state Board of Regents voted in September to eventually raze. In an email to The Daily Iowan, Sustainability Program Manager Blake Rupe said the office has moved once a year over the past two or three years, but Jessup Hall will be the office’s permanent location until it is renovated along with other buildings on the Pentacrest in the near future.

The decision to relocate in Jessup Hall was considered since last year, Rupe said. The goal of the move is to have a location that is central on the UI campus and more available to students, she said. Staff at the office were given options on where they would like to move the office, Rupe said, and Jessup Hall was chosen.

“We are more centrally located and accessible to students who want to stop in to ask questions, find resources, and learn about campus opportunities,” Rupe said.

The positions and responsibilities of staff at the Office of Sustainability and the Environment has not changed since the move, and the office is offering the same services to students, Rupe said.

Office of Sustainability and the Environment Communications and Diversity Intern Hallie Lartius said most of the move was completed over the UI’s fall break. Despite the move, Lartius said that the old office location is still available to students for the rest of the semester.

The move creates a “homier” office environment that is closer to campus, making it more prepared to address the needs of the Iowa City community while staying true to its existing missions, Lartius said. She said that the hope is to improve existing community relationships in addition to developing new ones.

“It feels like this could benefit our external relations with students because we’re in the center of campus,” Lartius said. “We have a hope that it will grow our reach to students.”

UI third-year student Jennifer McCarron said that she has never visited the office and was unaware of their services, but she thinks the move could change that.

“I do think the move could be a good thing because I would probably be able to hear more about what they are doing,” McCarron said.

However, not all students are sure the move will attract more visitors. UI second-year Emma Rosenberg said that she thinks the UI Communications Center was a more populated location for the office.

RELATED: Bidding farewell to The Daily Iowan’s old home in the Communications Center

“It seems like it’s one of the more unfamiliar buildings. It seems like a more subject-centered building, whereas the Communications Center has a lot of people pass through it,” Rosenberg said.

The Office of Sustainability and the Environment is also planning an open house for its new location to introduce the community to its new home, Lartius said.

Rupe said that the move is beneficial to both staff and students in terms of benefiting the community through sustainable efforts and initiatives.

“I’m looking forward to the opportunity to expand the reach and impact the OSE office has on events and academic missions across campus,” Rupe said.