UI librarian John Culshaw has been elected as the vice president for the Association of Research Libraries and started in October 2019. 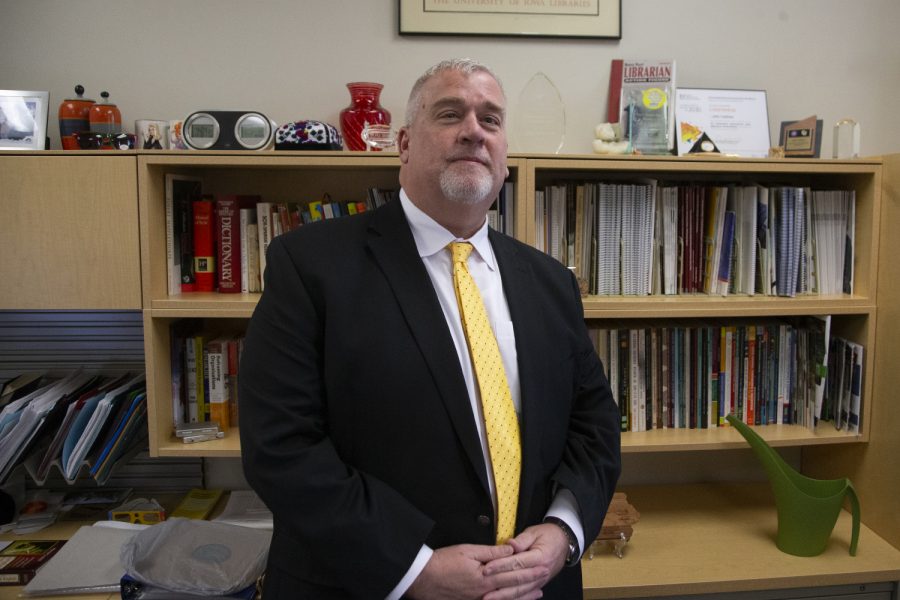 University Librarian John Culshaw poses for a photo in his office in the Main Library on Tuesday, November 12, 2019. After working as the University Librarian for seven years, Culshaw was elected the Vice President of the Association of Research Libraries. The association consists of 124 libraries in the US and Canada and focuses on collaboration with research, outreach and equity.

John Culshaw, the Jack B. King university librarian at the University of Iowa, was elected as the vice president/president-elect for the Association of Research Libraries in September, but he will also be planning to take the role of ARL president in October 2020.

“It is a great honor and a career highlight to represent the University of Iowa among our peer institutions through this role,” Culshaw said.

He said that, in his time with the UI, he has found different ways for the UI libraries to support researchers from discipline to discipline. One example, Culshaw said, is the fact that librarians in health science are engaged in systematic reviews.

“As the vice president, I’m a member of the board directors and help to set the priorities of the association,” Culshaw said.

As the representative of UI in the association before elected as the vice president, Culshaw said he hopes to come together with other university librarians and deans of libraries to talk about common issues and work towards a common solution to problems they see.

“I will be very busy for the next three years working closely with ARL staff to ensure the association maintains a strong presence in Washington D.C., advocating for research libraries at universities across the country,” he said.

Association of Research Libraries Executive Director Mary Lee Kennedy said the nominees of the vice president in the election are people from the board of directors of the association. The members of the board will elect the president, she said.

“He had a lot of roles before he is the vice president,” Kennedy said. “He led us through the revision and updating our constitution. He works with media closely on clarifying responsibilities of committee.”

Kennedy said that Culshaw knows his job and works well.

Before he came to the UI approximately six years ago, Culshaw had worked at the University of Colorado for 22 years. After he came to the UI, he established a scholarship program for UI library student employees as a support for them.

“Establishing a student employee scholarship at the UI Libraries was priority for me, because I started my library career during my undergrad years working as a library student employee,” Culshaw said. “I also feel it’s important to support students financially. I know college is expensive, and many students hold several jobs to pay their own tuition. Through the scholarship, the libraries provide support that allows students to focus on their academics.”

The scholarship has several donors who have given funds to help establishing and Culshaw is very proud of his work.

“This scholarship was a very good opportunity to gain support for my time abroad towards my rent and tuition,” said Jarod Concha, one of the student employee scholarship 2019 winners.

Concha studied abroad in Iceland in 2019.

Culshaw said that the library’s system in the U.S. is like a family, where he always branches out to talk to other librarians, work with them, and share information.

“The library is only as good as the people who work in it,” Culshaw said. “…the most important part of libraries today are the staffs, so that’s why it’s important for librarians to support each other.”