Ohio State, Wisconsin due up for rematch in Big Ten title game

Everything has come easy for Ohio State this year, and it needs only one more win to wrap up a perfect season of conference action. 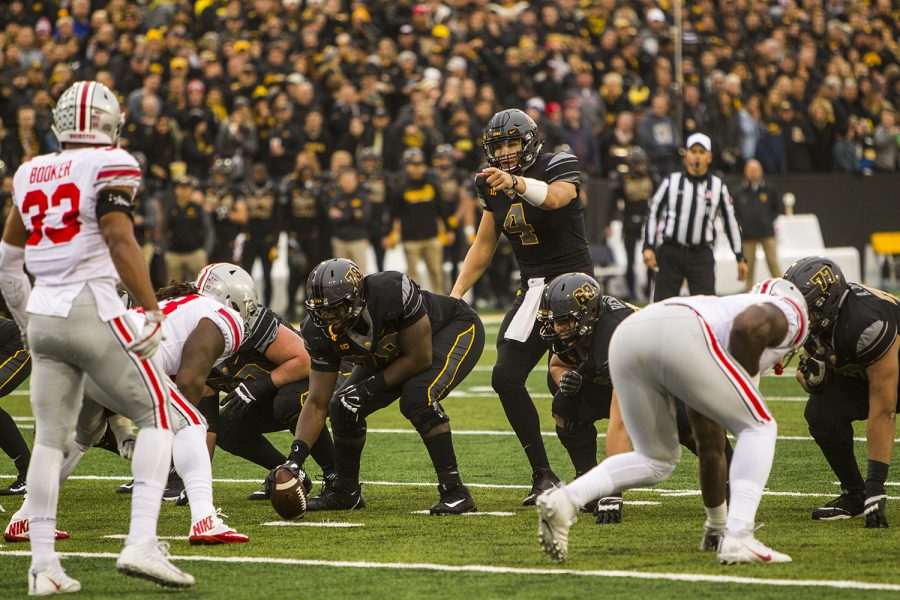 Iowa quarterback Nate Stanley points out a linebacker during Iowa's game against Ohio State at Kinnick Stadium on Saturday, Nov. 4, 2017. The Hawkeyes defeated the Buckeyes 55 to 24.

For the third time in the last six years, Ohio State and Wisconsin will face off in the Big Ten Championship game on Saturday in Indianapolis.

Ohio State seemingly has had its spot locked up in the Big Ten Championship since the beginning of the season. The Buckeyes have beaten every opponent this season by double digits, including three top-15 teams. Led by defensive star Chase Young, the Ohio State defense leads the country in total yards per game, giving up only 232.

It took Wisconsin a full season and a rivalry win over Minnesota to reach Indianapolis for the fourth time in six years. The Badgers have won four straight games, including a 24-22 win over Iowa on Nov. 9.

The undefeated Buckeyes are a heavy favorite heading into the title game, having already beaten Wisconsin once this season. Ohio State ran away with it in the fourth quarter in Columbus but held only a 10-7 lead at one point in the second half.

“They’ve gotten better as the season has gone on,” Buckeye head coach Ryan Day said. “It’s going to be a big challenge. It’s going to be hard, go all the way to the fourth quarter. We need to have a great practice.”

Another battle of running backs is set to take place in Indianapolis on Saturday, with two of the Big Ten’s most outstanding backs in J.K. Dobbins and Jonathan Taylor facing off.

Taylor has had his way with nearly every defense so far this year, averaging 6.3 yards per carry so far. But the Wisconsin offensive line saw significant struggles against the elite Ohio State defensive front on Oct. 26. The Buckeyes held Taylor to only 52 yards on 20 carries in the first meeting.

On the flip side, Dobbins was instrumental in the Buckeye win over Wisconsin. He rushed for 8.2 yards per try against a very solid Wisconsin defense, adding two scores as well.

“I’m very motivated,” Taylor said. “My team is going to try and lean on me to make plays, and I got to make sure I am ready this week and have a great week of preparation, so when my number is called, I am able to go out and execute.”

Ohio State thrashed Michigan, 56-27, last week but had a scare when quarterback Justin Fields had to go to the medical tent during the game with an injury. He came back and played through intense pain, adding to the drama of his stellar season. He assured fans he’s playing in the title game this weekend despite the event.

“It hurts right now, of course,” Fields said. “In my mind, I’m playing on Saturday. I don’t care how much it hurts.”

Fields posted 37 passing touchdowns on the year with only a single interception in his first year as a starting quarterback. He threw for a season-low 167 yards in the game against Wisconsin, but he passed for two touchdowns and added a score on the ground.