A new type of catheterized heart valve replacement, known as BASILICA, has been performed for the first time in Iowa at the UI Hospitals and Clinics. 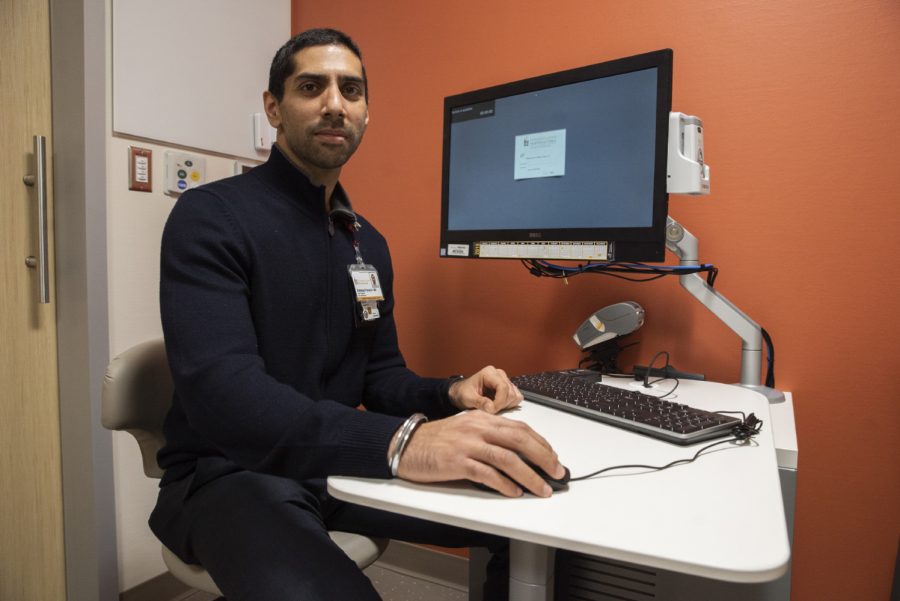 University of Iowa Hospitals and Clinics cardiologist Sidakpal Panaich poses for a portrait at UIHC on Wednesday, December 4th, 2019. UIHC cardiologists will be the first in the state to use a new procedure called BASILICA for heart-valve replacements which is safer for high-risk patients.

After the University of Iowa Hospitals and Clinics became the first health-care center in Iowa to perform a procedure that makes heart-valve replacement safer, UIHC now hopes to use this to increase treatment options for its patients.

During TAVR, a catheter is fed through the femoral artery and up to the aortic valve of the heart.  Using imaging techniques, a balloon is then used to place a new aortic valve and the catheter is removed.

Since the TAVR was first performed on humans in 2002, it has gained popularity around the world as a minimally invasive alternative to open-heart surgery.  Since 2015, there have been more TAVR procedures per year in the U.S. than surgical aortic valve replacements, and this trend shows no sign of slowing, according to a report from a 2018 journal written by the Director of Cardiac Catheterization Labs at the University of Colorado.

“BASILICA keeps adding to the kinds of patients that we can treat with TAVR, including those with more complex heart valve disease,” he said.

During the BASILICA procedure, a small electrified wire is passed through the catheter and used to cleanly split the aortic leaflet in two.  This prevents the leaflet from blocking the flow of blood to the coronary arteries during the TAVR, which is fatal in about half of cases. Using this procedure, patients formerly deemed too high-risk for TAVR can now undergo the procedure without the risk of coronary blockage.

This is especially important for elderly or frail patients for whom major operations, such as open-heart surgery, could prove fatal, Lederman said.

Lederman has spent much of his career researching catheterized cardiovascular interventions.

A fellow in Lederman’s lab, Jaffar Khan, invented the BASILICA procedure when cardiologists from around the country came to the National Heart Lung and Blood Institute seeking a solution for coronary blockage associated with TAVR in high-risk patients.

“Only around 1 percent of patients having TAVR need this,” Lederman said.  “But because the number of people undergoing TAVR is so high, BASILICA is important to at least 1,000 patients a year, and for those patients, it’s 100 percent.”

So far, UIHC has performed two TAVR procedures with BASILICA.  Both have been led by UIHC clinical assistant professor of internal medicine Sidakpal Panaich.

Panaich explained that although BASILICA is a new procedure, it has quickly entered into the mainstream at UIHC because of high patient volume and the experience level of the staff.

“These are patients who are of somewhat higher surgical risk who otherwise would have to undergo open-heart surgery,” Khan said. “ With BASILICA, we can safely offer them a transcatheter procedure, which is much lower risk than open-heart surgery. Before BASILICA, they would be forced to choose between a high-risk surgery or to not [undergo any treatment].”