The undefeated Tigers offered another stiff test to the Hawkeyes, which they handled well. 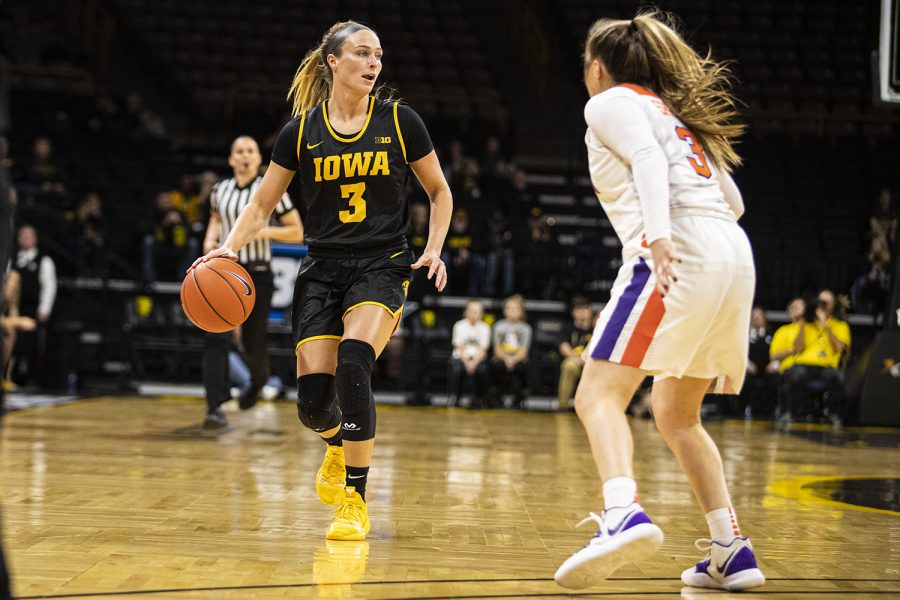 In what was a complete performance at Carver-Hawkeye Arena, the Hawkeyes relied on each other with another great offensive passing performance.

Despite not always piling points on the board, Iowa’s passing has continued to be a high point throughout the season. The Hawkeyes recorded another 28 assists in tonight’s game, and Monika Czinano credits the guards for their ability to make big plays from out of nowhere.

“They had some behind the back of the defender passes, some bullets that were high IQ basketball passes, and I think the guards did an amazing job of finding the post throughout the entire game,” she said.

Guards Kathleen Doyle and Makenzie Meyer lead the team with an impressive nine assists each, while Mckenna Warnock added three more. While Iowa was able to rack up assists, the Tigers struggled in that department, recording just 10.

It highlights a general theme throughout Iowa’s season, where Iowa has averaged 19.1 assists per game compared to 14.1 allowed.

Whenever the Hawkeyes got the ball, the team was always looking to find the open player and consistently moved the ball, creating many open looks from both inside and deep.

There were many cross court and thread-the-needle passes that did not work all the time, contributing to the 17 turnovers Iowa had. Despite this, Bluder liked what she saw with the risk taking and the mentality the team has in regard to the innovative play.

“You got to take some risks, or you don’t ever learn,” she said. “I want to see a good fake before we pass and just not stare at it. As long as they’re doing those things, it’s pretty exciting to thread the needle on a pass.”

The Hawkeyes started strong and took several good looks early on in the game, shooting 71.4 percent from 3-point range on seven attempts. This gave the team a cushion that kept it ahead of Clemson the majority of the contest, with Iowa leading for over 35 minutes.

Although there were some tight moments during the game where it looked like Clemson was going to go ahead, Iowa continually answered, whether it was forcing an impressive 22 turnovers or crashing the glass. A strong start at the end of the third quarter into the beginning of the fourth allowed Iowa to pull away with a 19-5 run.

Iowa had a solid night with Amanda Ollinger just one rebound off of a double-double and Monika Czinano posting a season-high six rebounds while contributing 24 points.

Many of Iowa’s guards had good offensive production thanks to many of the open looks created during the game, with Doyle adding 14 points and Marshall adding nine more.

Tonight’s game also saw the return of last year’s stars Hannah Stewart and Tania Davis, with the pair honored before the tip-off while handing Bluder a 400-win ball.

“It’s kind of weird, but like coach Bluder said, after the initial saying hi to her, you try to focus on the game and taking care of business,” Doyle said.

The Hawkeyes will have a week to prepare before they face in-state rivals Iowa State in Ames next week.