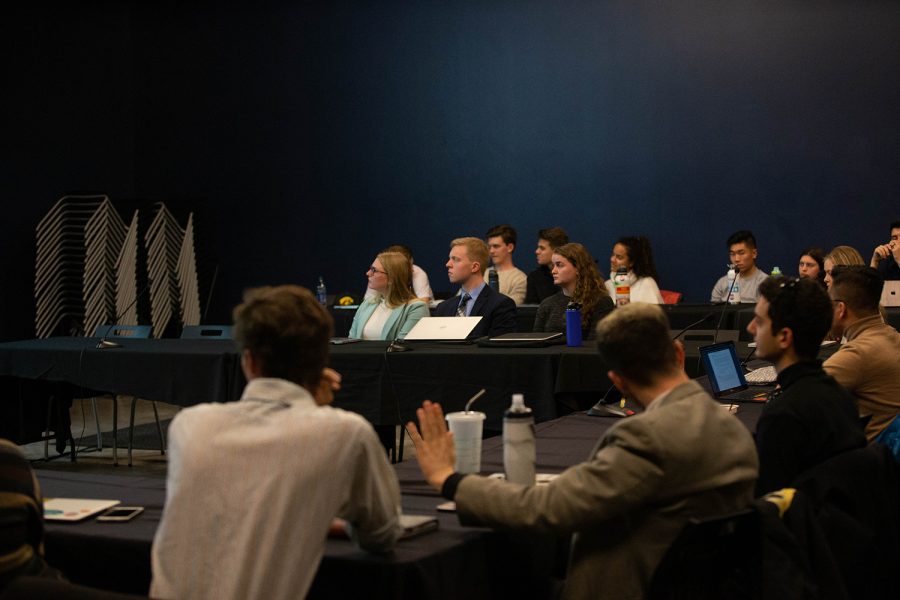 University of Iowa Student Government Senators listen to a presentation during a meeting in the IMU on Tuesday, Nov. 12, 2019.

After a heated debate and two election-code changes during the University of Iowa Student Government Senate meeting Tuesday, the organization’s president Noel Mills vetoed a bill that would remove a joint-ticket option.

The two pieces of legislation that passed the student senate Tuesday focused on clarifying and updating the guidelines of the UISG election ticket. The second proposal, which Mills vetoed, aimed to remove a joint-ticket option — in which senators and executive board members run together ­— and stipulated all election code changes would need to be made by September. The bill passed with 70.8 percent approval from the student senate.

In a letter to UISG senators, Mills identified her main concerns with the bill as negligent timing, coming just four months before the next campaign period begins; a potential to weaken UISG’s accessibility by undermining current efforts to make the organization more transparent and accessible; and an allowance for dangerous assumptions about senators’ contributions to their tickets.

“With less than four months before the commencement of the campaign period, one of those months including winter break, making a drastic change like prohibiting joint tickets undermines our commitment to transparency and accessibility,” Mills wrote in the letter. “The important work that has begun to create transparency for and encourage participation in the upcoming election will be severely set back by these drastic changes.”

Mills also disputed the idea that students need to “know the right person” or “have the right connections” to join a ticket and said that notion is the result of “poorly built tickets in the past.”

“A successful ticket will include students from various communities, backgrounds, and interests as to represent as many parts of campus as possible,” she wrote. “Our ticket this year included 11 students who have never been in UISG, with seven of those students being strangers to us when we met. While one president and vice president team cannot reach out to every person that may be a good member of student government, those students have always had and will always have the opportunity to run as independents or create their own senatorial ticket.”

UISG At-Large Sen. Teagan Roeder, a co-author of the legislation, made a passionate plea that his fellow senators pass the bill Tuesday.

Roeder wrote this legislation alongside UISG Internal Affairs Committee Chair Anna Correa. He said at Tuesday’s meeting that this legislation would create better accessibility to UISG positions for UI students who were outside of the organization, a problem he came face-to-face with in his run for a senatorial position last spring.

“In my personal opinion, the veto letter has a lot of misleading information,” Roeder said Wednesday. “It mischaracterizes what the [election] process has been like and what the legislation intended to do. In general, it did not take a fair look at the legislation and what it attempted to do.”

Roeder said there will be a veto override meeting Dec. 10. He also wrote a response to Mills’ letter and posted it on his personal Facebook page.

In an email to the DI, Mills said she agreed with the timeline aspect of the bill when it comes to election-code revisions. Accessibility is always at the forefront of UISG, she said, but this legislation was not the best way to maximize it.

“We have made huge strides in accessibility this year with our monthly newsletter, a more robust social-media presence, and the liaison program with student organizations,” she said. “Of course, we are always striving to create more transparency — it’s something we’ll never stop trying to improve.”