While there are several risks involved, the benefits of the legal weed in the Hawkeye State would be worth it. 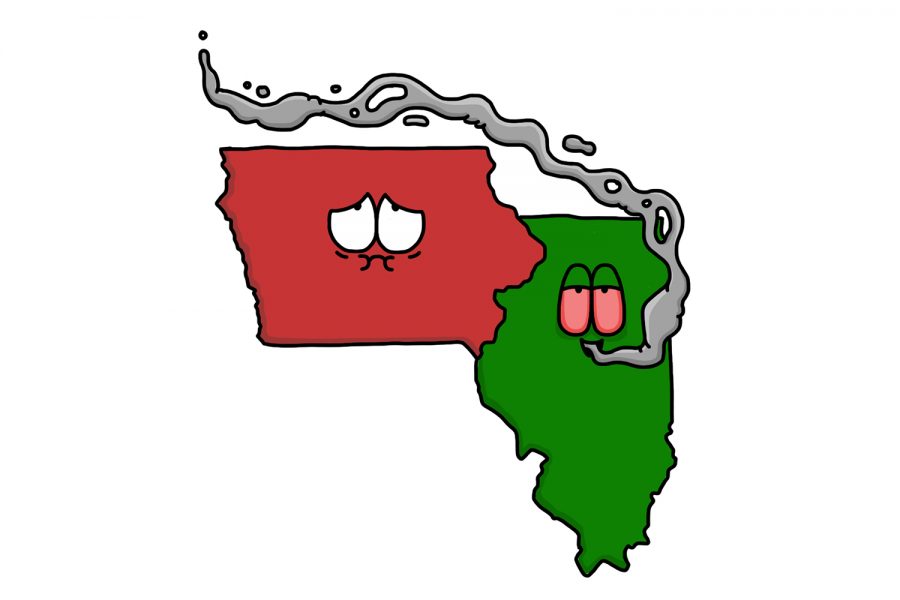 The nature of marijuana legalization in the Midwest is changing rapidly. Recreational sales in Michigan began last weekend and will become legal in Illinois on Jan. 1 2020. Meanwhile, in Iowa, outlooks for the drug are shaky at best after Gov. Kim Reynolds vetoed a bill in May that would’ve expanded Iowan’s access to medical uses of the drug.

Reynolds’ warning that Iowans ought to proceed cautiously needs to be hashed out. The reality is that Iowa City is a college town an hour away from the Illinois border. Although it’s still illegal to drive under the influence or possess weed in Iowa — even if it’s legally acquired elsewhere — people who want to get high are going to get it. Illinois’ legalization means that Eastern Iowans can bring any negative impacts of marijuana back to the state, but none of the potential benefits.

For one, the state of Illinois is now the easiest supplier of cannabis for Iowans. Those dealing in the illicit market now have a well-known and un-arrestable “plug” for pot that can be easily brought back to the University of Iowa campus and sold illicitly.

Concerns about criminal activity that would justify outlawing cannabis are null given that Iowans will now have an unchecked supplier an hour to the east, which will certainly increase the market for recreational marijuana back home.

There is, of course, the option of cracking down on recreational use, but that’s a rather expensive prospect that tends to be racially biased, so it’s not a great alternative. Even if it were actually a major cause of other criminal activity — and it’s not — it’s still much more challenging to fight crime associated with weed revenue than it is to just legalize the stuff and price illicit dealers out of the market.

If they don’t want to risk buying marijuana illegally, consumers can still go to Illinois to legally purchase their own supply, cutting out the middleman. Again, bringing the weed back to Iowa is still a crime, but it’s much harder to enforce possession laws than laws on commercial sales. So if obtainment is easy, other legal hurdles are less effective.

The problem is, many of these users are more likely than not to drive back under the influence — an act that is, for good reason, illegal in every state, with or without legalization.

Marijuana impairs reaction time and attention, and while it’s often hard for law enforcement to catch individuals violating DUI laws, car accidents resulting from high drivers happen without getting caught by the law. Studies from the Insurance Institute for Highway Safety find that marijuana is associated with as much as a 6 percent increase in car accidents in states that legalize it.

While less data is available regarding states neighboring recreational weed, the point is still clear: increased access to pot will increase DUI cases and car accidents related to marijuana. This necessitates resource allocation to things such as highway patrol and infrastructure to offset harms brought about by potentially high drivers.

But, by not legalizing the substance, Iowa will soon have to deal with all of these weed-associated problems, despite benefiting from none of the product’s tax revenue.

States that have legalized pot have taxed it from 10 percent to as much as 37 percent above local sales tax. The resulting revenue allows them to overcome pot’s costs on the state, such as DUI arrests, increased highway patrols, and/or infrastructure damage from marijuana-induced accidents.

The whopping increase that legal sales can bring to state revenue can also help fund projects such as better health programs to solve the more problematic uses of weed, such as by drivers.

All things considered, with cannabis legalization rolling out across the Midwest, it’s time for Iowa to get with the program. Thanks to Illinois, the costs of marijuana are coming to Iowa, ready or not, but legalization would grant benefits that’d be (ahem) pretty dope.