Ollinger, Czinano dominate inside in Iowa win over Clemson

The Hawkeye women might have a guard-based offense, but the inside tandem of Amanda Ollinger and Monika Czinano won the night in Iowa’s win over Clemson. 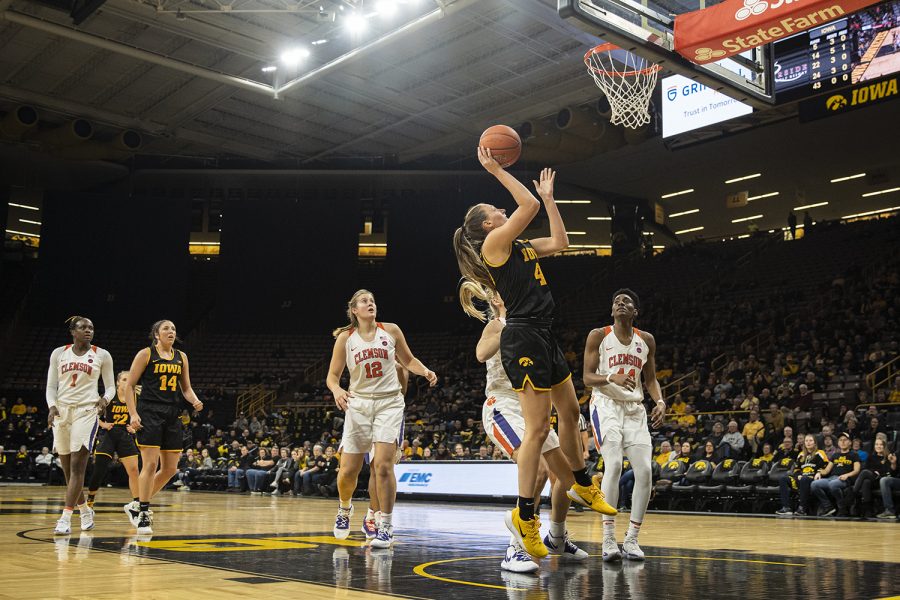 Iowa forward Amanda Ollinger goes to the rim during a womenÕs basketball match between Iowa and Clemson at Carver-Hawkeye Arena on Wednesday, Dec. 4, 2019. The Hawkeyes defeated the Tigers, 74-60. (Shivansh Ahuja/The Daily Iowan)

The Hawkeye women have great depth and talent at the guard position, but the frontcourt tandem of Amanda Ollinger and Monika Czinano stole the show in Iowa’s win over Clemson on Wednesday.

The pair combined for 35 of Iowa’s 74 points on the night, shooting 16-for-21 from the field. Czinano led both teams in points with a career-high 24, and Ollinger’s nine boards were the most from either team on the night.

Penetrating Clemson’s zone defense and getting the ball inside to the pair, head coach Lisa Bluder said, was a central focus heading into the game. In Iowa’s previous loss to Washington on Nov. 30, the Hawkeyes struggled working through a zone defense, but that effort was improved on Wednesday.

“We had a good opportunity,” Bluder said. “We played against some zone against Washington, and I think we learned a lot. We were still able to get the ball into Monika [tonight].”

Czinano has truly been an X-factor for the women so far this season. Heading into the night, she led the country in field-goal percentage, a feat that is evidently becoming common for Hawkeye inside players.

This was no different against Clemson, as Czinano shot just over 73 percent from the floor. She also managed a block in the waning seconds of the game, adding to a statistically impressive performance.

“She works really hard,” guard Kathleen Doyle said. “What you see in the game is what you see in practice every day. She’s earning everything that she’s getting during games. She does her work early and makes her life easier when she does that.”

Of course, it doesn’t hurt when the guards are feeding the ball at a high level. Iowa had 28 assists on 30 baskets on the night, with Doyle and guard Makenzie Meyer leading the way at a combined 18 assists.

“I think a lot of the times, when the ball got inside, it was because the guards had some amazing passes,” Czinano said.

Still, it went beyond scoring and offense. The Hawkeyes won the rebounding battle against Clemson on the night, something that the team doesn’t always accomplish given its focus on the outside. Ollinger led this fight on the defensive end, where she grabbed seven of her nine total boards.

“I really am pleased. We out-rebounded them,” Bluder said. “Albeit by one, but we out-rebound them…and that doesn’t always happen for us, so that was nice to see.”

Ollinger was nearing a double-double on the night before she left the game after rough contact in the fourth quarter. Bluder said an apparent injury to her jaw leaves her status unclear.

Ollinger’s efforts aren’t always statistically rewarding, but they are often the most-needed parts of Iowa’s game. Bluder has reiterated Ollinger’s high value to Iowa’s defense time and again, and it was true again against Clemson. Ollinger added a couple steals to her stat-line in the performance.

The pair has been leaned on significantly already this season. Czinano played for 35 minutes in the win over Clemson, with Ollinger close behind at 23 even after leaving the game early. Having dependable, consistent options like this on the inside can only help a team with a lot of youth.