While tattoo artists can go on wildly different journeys to the shop, they all share a love of the art they bring to life on people’s bodies. 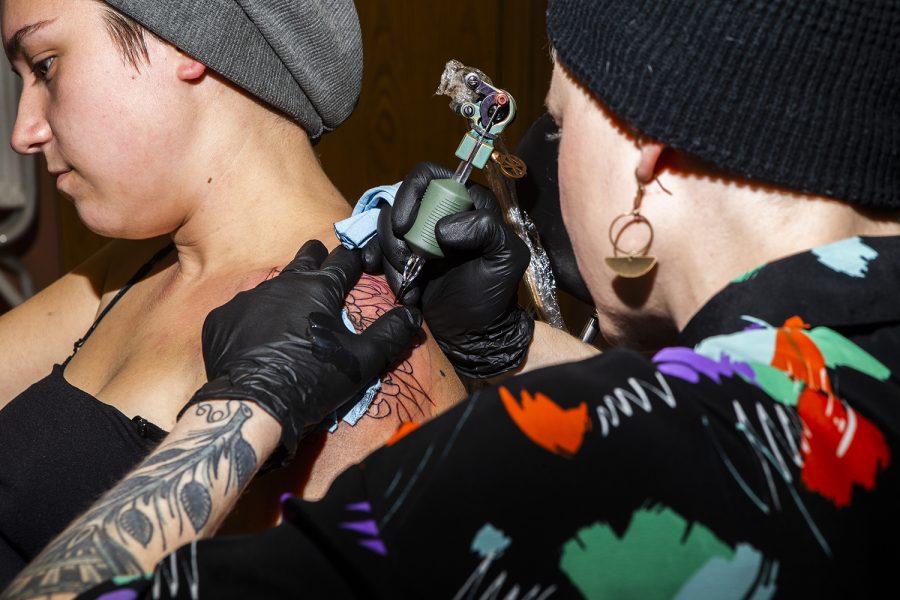 Managing Editor for The Daily Iowan, Brooklyn Draisey, gets a tattoo done by Anne Marsh at Iowa City Tattoo on Friday, November 22, 2019.

There’s a weird feeling that comes along with knowing you’re about to willingly put yourself through pain. There’s plenty of excitement at the thought of incorporating beautiful artwork on your body, but there’s also the thought of, “Am I seriously about to just sit there while someone sticks a needle in my skin for three hours?”

That someone — the tattoo artist — might be someone who knew they wanted to draw on other people’s bodies for their entire life. Or else they may have discovered their passion and abilities later on. Here in Iowa City, we tattoo lovers have a number of places to go for a tattoo. We also have a number of artists to choose from who have taken a variety of paths to reach the same destination.

I always forget the exact feeling of the tattoo needle dragging against my skin until I hear the machine buzzing. Then, as the first line is drawn, it all comes rushing back. The artist hovered beside me. I relaxed into the chair as much as I could, and we began.

For my fourth tattoo, I chose a red and yellow chrysanthemum. About the size of my hand, it would be laid atop my left shoulder. Every year since I turned 18, I have treated myself to a tattoo, and three tattoos in, I was not about to stop now.

Anne Marsh, an artist at Iowa City Tattoo, would be inking her second tattoo on my body. Like me, she keeps her hair short and wears a stocking hat. And like me, she has tattoos. But unlike me, Anne has been at the other end of the needle for almost 10 years. Was this the career she ever considered while attending the University of Iowa? No.

Marsh studied biology and painting at the UI with the goal of doing medical illustration as a career. She later lost interest in the program, she said, because of the large amount of computer graphics involved. She ended up doing research at the UI for a couple years after graduating.

But attending the UI provided her a perspective on a different kind of artwork than medical illustrations. Not having grown up surrounded by people who sported ink, she said she fell in love with the craft when she saw inked work on others’ bodies and started getting her own tattoos. After receiving an apprenticeship from the woman tattooing her and moving back to Iowa City for a second apprenticeship, she became a full-time tattoo artist.

Like Marsh, UI senior Casey Gartlan won’t jump into tattooing right away. Gartlan is studying to become a nurse, which she’s planning on doing alongside tattooing, because she said the schedule will be flexible. She sells prints of her art at local store White Rabbit and online through Etsy, and has drawn around 50 tattoo designs for people. Much of her art is anatomy-focused, a blend of her studies and her creative process.

“I was doing a study guide for myself with all the bones, and I ended up doing it super detailed and cute… and I made prints out of that, and then people really liked it,” Gartlan said.

She is hoping to practice tattooing while working with the hope of gaining an apprenticeship.

“With the flexibility of nursing, [balancing tattooing and nursing] wouldn’t be that difficult, and I always have to have a project going,” she said.

Zoë Butler, who graduated from City High, said a summer class at the Robert A. Lee Recreation Center made her fall in love with art. Now, being a tattoo artist is high on her list of goals.

“I really like the idea of mixing you know, art and putting it on humans,” Butler said. “I think that’s what I think is the most meaningful.”

Now living in Brooklyn, New York, and working full-time in retail, Butler said it’s been hard trying to launch that dream and find an apprenticeship. She hopes to establish a rapport with an artist who is working on her body, and then going the next step to an apprenticeship, which she said helps to build a connection with an artist so they are willing to take a chance on them.

Marsh echoed that sentiment, saying the relationship she had with her artist helped her in getting her first apprenticeship.

“So when it came to considering tattooing as a living, there’s somebody that kind of gave me a blueprint for how I could also do that…” Marsh said. “It was easier to imagine myself in this job that way, but also that we had a little bit of a connection … it set the barrier a little lower in terms of anxiety over even asking for an apprenticeship.”

As we drew closer to the finish line, I started to wonder if the pain was worth the end result. Marsh scratched green along my collar bone and over the back of my shoulder blade, holding me steady when I unconsciously started to scoot away. Red ink mixed with blood as she made the petals pop. Three hours in, and I had decided that I might never get another color tattoo.

All those thoughts slipped away when the needle came off my skin and I was able to look in the mirror. Despite the angry puffiness of my skin, the chrysanthemum looked like it was growing out of my body, ready to spring up toward the sun at any given moment. Petals curled daintily and leaves rested gently, settling perfectly into the shape of my shoulder. I loved it. I wanted to get another one immediately (though not as big).

Related: Getting inked, from building needles to now

The most important pieces of advice Marsh could give to aspiring tattoo artists is to get tattooed and have a portfolio. Getting tattooed allows people to see how a real shop works and meet a tattoo artist who could be a connection in the future. With portfolios, Marsh said it’s not as paramount to show that one can draw classic images as it was in the past.

“And I would say probably at this point all art is valid art…” Marsh said. “So just showing that you can do something innovative or that you’re going to bring something else to the party is probably as important as being like I can draw a Sailor Jerry rose as well as anybody else.”