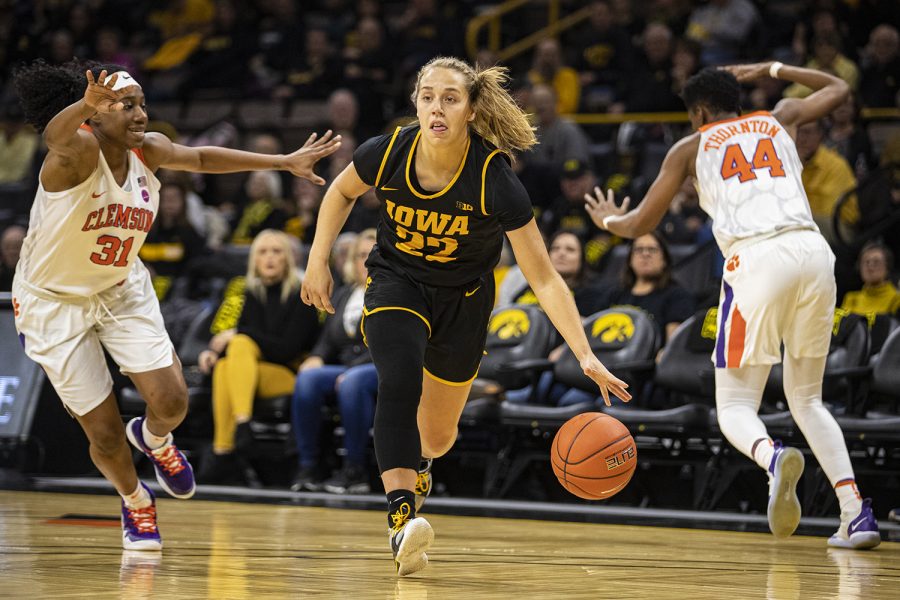 Iowa guard Kathleen Doyle drives to the net during a women's basketball match between Iowa and Clemson at Carver-Hawkeye Arena on Wednesday, Dec. 4, 2019.

In a night full of homecomings, Hawkeye women’s basketball earned a convincing 74-60 win over Clemson at Carver-Hawkeye Arena.

The night started, though, with a ceremony honoring last year’s Big Ten Championship achievements. Former guard Tania Davis – now a Clemson graduate assistant – was joined on the court by former forward Hannah Stewart, as each received their championship rings from last season’s achievement.

Alongside them was Lisa Bluder, who was given a commemorative basketball in honor of her 400th win as Iowa’s head coach earned last week in Puerto Rico.

But as the evening turned to basketball, it quickly became obvious that Clemson could not outmatch Iowa’s quick guard play.

Right out of the gate, it was a shooting battle at Carver. Iowa started the matchup shooting 5-for-6 from the 3-point, with five different players adding shots behind the arc. Hawkeye guards led a conscious passing effort, as the team combined for 28 assists on the night.

The only answer Clemson had was in Kendall Spray, who went 4-for-6 from deep in the first half.

Iowa’s shooting spree slowed down after the break, but a flurry of Clemson turnovers left the Tigers unable to make a serious comeback bid. Clemson committed 22 turnovers on the night, met with only 10 assists.

Amanda Ollinger and Monika Czinano led the Hawkeyes statistically, combining for 35 points and 15 rebounds. They shot a combined 16-for-21 from the field.The Hawkeye women next face in-state rival Iowa State on Dec. 11 in Ames at 7 p.m.