UI officials on Tuesday shared information with the State Board of Regents regarding the structure of its potential partnership with a private firm to operate and maintain its utility system. 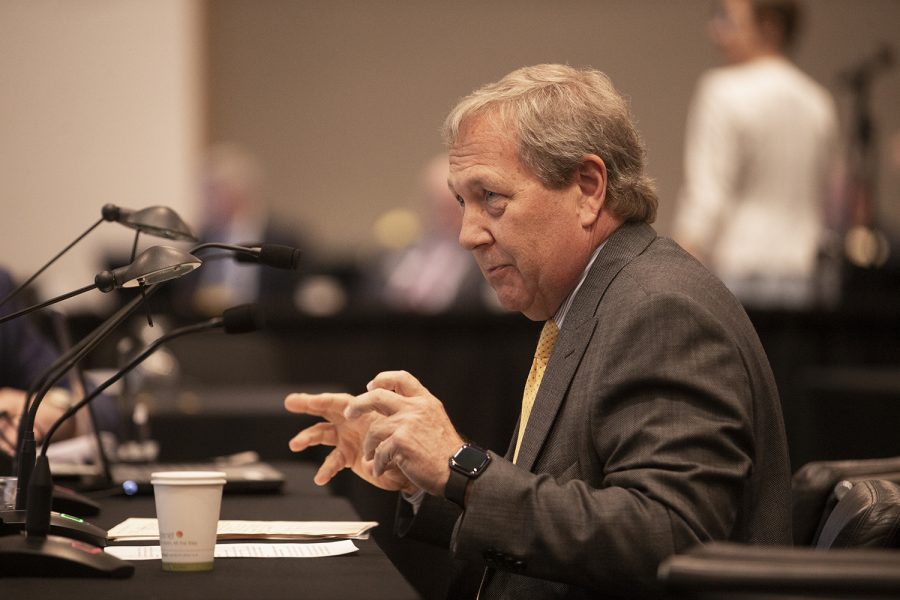 University of Iowa President Bruce Harreld speaks in front of the state Board of Regents on Thursday, April 18, 2019.

University of Iowa administrators shared Tuesday that the proceeds placed into a new endowment from a possible public/private partnership for the maintenance of the campus utility system are expected to generate around $3 billion over 50 years — a sum that would help fund institutional priorities.

This pursuit could generate resources that the UI would use to invest in its strategic plan — funding programs to support efforts such as boosting retention and graduation rates — and ultimately reverse the university’s fall in national rankings while better serving students and the state, UI President Bruce Harreld told the state Board of Regents during an informational webinar.

The regents will consider on Dec. 10 the university’s potential deal with a private firm — which the UI has not publicly identified — to operate and maintain its utility system.

The university has not identified the amount the company would pay in an upfront lump sum for the UI to place into a new endowment to grow over the 50-year term of the agreement. Of that lump sum, the UI would use around $166 million to pay consulting fees and its outstanding utility-system bond debt.

Should the UI and the regents proceed with the proposal, a financier and the operator would invest money to create the concessionaire, a new entity with which the UI would partner. A nonprofit will be formed to hire a firm, invest the net proceeds, and determine allocations from the “P3 utility endowment.”

A nonprofit board composed of one regent, one Faculty Senate appointee, and the UI senior vice president for Finance and Operations would meet quarterly to review the fund’s operation, hire investment advisers and managers, and determine the yearly allocations to campus. Shared-governance leaders and a budget review board would collaborate to determine how to share the proceeds from the deal.

Harreld said the UI has determined it needs to spend $33 million annually to fund its strategic plan. Officials expect to tap into the partnership endowment to use $15 million each year to support the institution’s goals, which would be distributed through one- to five-year grants. Those grants likely won’t involve building projects and facilities, Harreld said.

The UI has modeled a conservative rate of return in estimating that its partnership endowment will grow to $3 billion, Harreld said. This means the UI could realize more proceeds but has accounted for historical returns and potential fiscal collapses “so that we don’t overspend and overfund based on expectations that don’t materialize.”

UI Chief Financial Officer and Treasurer Terry Johnson said he estimates the new for-profit entity created under the public/private partnership would pay around $700 million in state and federal taxes over the course of the 50-year agreement.

That financial boon is “a good thing for the overall economy of the state and the United States government,” Harreld said.

As a nonprofit entity, the UI does not pay taxes on the approximately $98 million it spends annually to operate its utility system, which generates and distributes water, energy, and steam to the campus and its auxiliary units, including Housing & Dining, Athletics, and UI Hospitals and Clinics.

While stewarding those resources to campus, the UI would pay a yearly fixed fee of $35 million — which increases 1.5 percent annually after the first five years — to the firm to operate the utility system. The UI would still pay for fuel, employee wages, and capital expenditures.

The firm must meet certain key performance indicators, including committing to being coal-free by 2025 and upholding the university’s sustainability goals. If the firm fails to meet those standards, it could face penalties.

The Utility System’s approximately 120 employees could choose to work with the new operator or retain their positions with the UI, and Harreld said keeping these workers is one of those key metrics needed to comply with the contract.

Harreld predicted the U.S. is in the early days of a floodgate of public/private partnerships, particularly in the higher-education sector as universities face dwindling enrollment and other challenges.

“… We’re getting quickly to the point where we can look back on the last year or two, and say it’s been an amazing year,” Harreld said, “and a very momentous — maybe even tremendously momentous — period in the university’s history.”