The Iowa City City Council has delayed its first consideration to repeal the rental moratorium in an effort to give members of the public sufficient time to submit their own suggestions for how the city can regulate rental permits. 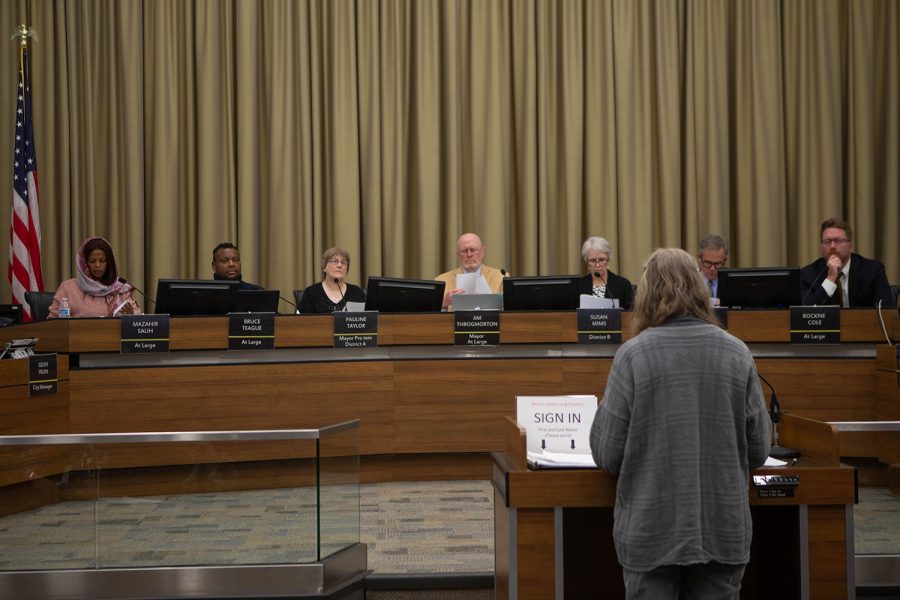 Iowa City resident Nancy Carlson speaks to the Iowa City councilors during a public comment period during consideration of an ordinance that would repeal a rental permit moritorium on Tuesday, Dec. 3, 2019.

The Iowa City City Council voted 6-1 to defer its first consideration of the repeal of a rental moratorium to Dec. 17 so citizens have time to propose alternative ways for the city to reduce the impact of rental housing.

The moratorium, which was initially enacted in May after state lawmakers passed a bill preventing cities from enforcing rental caps, prevents new rental permits for single-family and duplex units in certain neighborhoods.

Iowa City used rental caps to control the number of rental permits in the neighborhoods near the University of Iowa campus before the bill passed, aiming to prevent overcrowding among rental properties — typically in student-dominated neighborhoods.

The goal of the moratorium is to give city staff sufficient time to consider alternative ways to reduce the impact rental housing may have on housing stability and affordable housing, according to City Council documents.

Iowa City Mayor Jim Throgmorton proposed deferring the consideration to give citizens and city councilors elongated opportunity to submit ideas for the requirements the city can put in place involving the upkeep of neighborhood properties.

Ideas must be written and submitted to the council by Dec. 12 to be considered during the Dec. 17 meeting.

“It is not clear to me that we can invent, over the next couple of months, a solution that the staff has not been able to identify or devise over the past seven months,” Throgmorton said.

Iowa City City Councilor Susan Mims was the only member to oppose the deferment of a first consideration, stating that the requirement of at least two considerations of the repeal is an adequate amount of time for citizens to propose alternative ideas for consideration.

Throgmorton said he did not feel comfortable voting in opposition to ending the moratorium, not wanting to end it sooner than scheduled without ensuring that the public had the opportunity to adequately explore all possibilities and share its input.

In addition to the repeal of the moratorium, the City Council gave a second consideration of a proposed radon testing ordinance and voted 7-0 for an ordinance requiring a nine-foot separation between conforming parking spaces and additional paving area.

The radon testing and single-family site development ordinances were created as a way to regulate rental properties. The moratorium will automatically end March 1, 2020 if not approved after three considerations.

Iowa City City Manager Geoff Fruin said during Tuesday’s meeting that some city staff members felt a 10-month moratorium was too long. Right now, the moratorium is in its seventh month, and city staff has done the work to determine ordinances to regulate rental properties.

The bedroom and parking space at houses are currently regulated by the city in an effort to control population density in the neighborhoods, Fruin said.

“We really felt like we need to give [the current regulations we have] time in order to be effective,” Fruin said.

While City Councilor Bruce Teague supported the deferment of the repeal, he said that keeping the moratorium until March may not be necessary if a better ideas are not brought before the council.