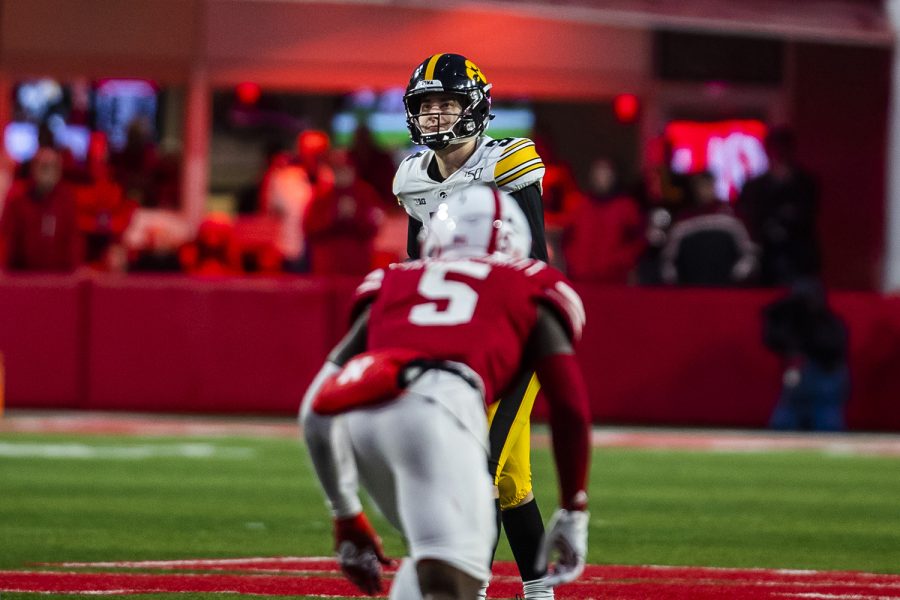 Iowa kicker Keith Duncan prepares to kick a field goal during the football game against Nebraska at Memorial Stadium on Friday, November 29, 2019. The Hawkeyes defeated the Cornhuskers 27-24. Duncan's kick caused the Hawkeyes to take the lead against Nebraska in the last six seconds of the game.

Duncan became the first Hawkeye to win the Big Ten’s Kicker of the Year honor since its inception in 2011. Duncan set Big Ten and Iowa program records with 29 field goals on the season, which also ranks sixth in NCAA single-season history.

Ojemudia leads Iowa with three interceptions and seven pass break-ups, while Stone racked up one pick, defended three passes, and forced two fumbles to go along with 65 tackles.

Welch paces Iowa with 80 total tackles despite missing three games due to injury. The senior from Iola, Wisconsin, posted double-digit tackles in each of Iowa’s final three games after coming back from his injury. He finished the regular season with 7.5 tackles for a loss, three sacks, three pass break-ups, and a forced fumble.

Golston narrowly trails Epenesa with 8.5 tackles for a loss, while also recording 2.5 sacks, four pass break-ups, and an interception.

Lattimore, Golston’s high-school teammate, posted three tackles for a loss, 2.5 sacks, and recovered a fumble while starting all 12 games for Iowa.

After joining the Hawkeye program as a graduate transfer, Sleep-Dalton 42.1 yards on 54 punts with a long of 63. He pinned opponents inside their own 20-yard line 21 times and eclipsed the 50-yard mark 10 times.

Offensive award winners will be announced on Wednesday.