Ruden: Iowa exposed Nebraska for what it is

With its Nov. 21 win, Iowa proved Nebraska isn’t worthy of a bowl. 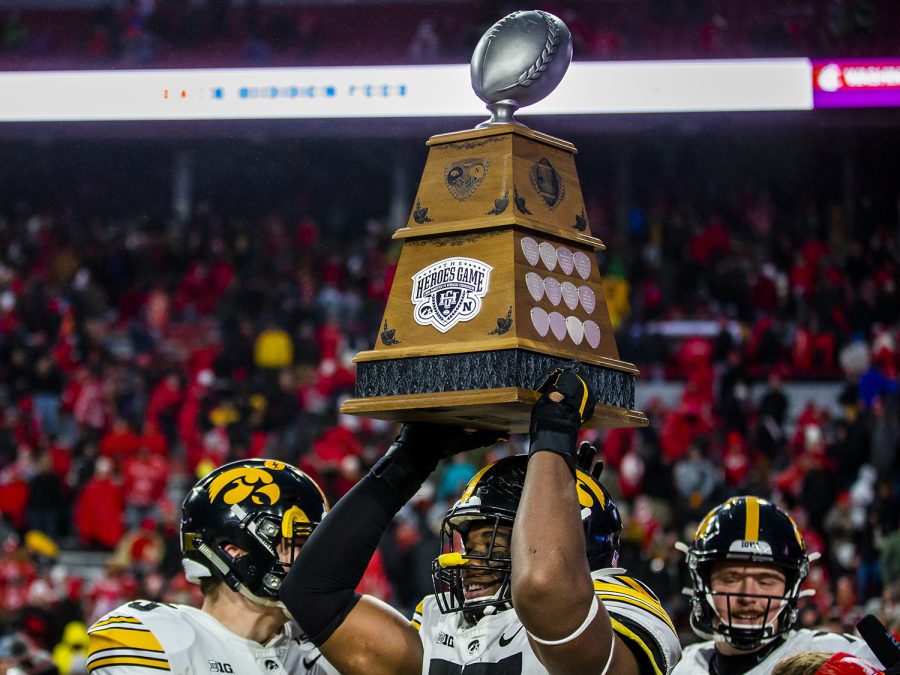 Iowa defensive lineman Chauncey Golston carries the Heroes Trophy after the football game against Nebraska at Memorial Stadium on Friday, November 29, 2019. The Hawkeyes defeated the Cornhuskers, 27-24.

After hitting his game-winning kick from 48 yards out, Keith Duncan gave the Dikembe Mutombo finger wag to Nebraska’s bowl hopes and blew a kiss to Scott Frost and the rest of the Husker sideline.

The Hawkeyes’ win over Nebraska exposed the Huskers for what they are: imposters who don’t deserve to take part in a bowl game yet.

They showed that by celebrating a field goal by letting their red balloons fly in the sky. But much like the Huskers on the field, some balloons fell to the turf, unable to accomplish what they set out to do.

When the season began, many, for some reason, took Nebraska to win the Big Ten West. That couldn’t have been a bolder prediction, and Nebraska proved that when it lost to Colorado in Week 2 after a slight scare from South Alabama in its first game.

Despite the early setback, Huskers entered the Black Friday matchup with a chance to reach their first bowl game since 2016. That’s not the same as a Big Ten Championship appearance, but it would’ve been a step in the right direction.

But Iowa proved its currently a better program than the Huskers in nearly every aspect by ending that opportunity after Nebraska charged back from a 14-point deficit in the second half.

Related: Epenesa balls out in win over Nebraska

Frost said after the loss that he will continue to tell recruits that “it’s coming.” But there have been no signs of future success, and it won’t get any easier next season.

The Huskers open the season with potential challenges in Purdue, Cincinnati, and Illinois before closing the season with a gauntlet that includes Ohio State, Penn State, Iowa, Wisconsin, and Minnesota in the final five weeks of the season.

If Nebraska fails to make a bowl game again in 2020, it’ll be their longest stretch without a bowl game since the 1950s. The kids would call that an incredibly tough scene.

Iowa’s currently on its longest streak of success against the Huskers, yet it seems as if Nebraska feels it still runs the rivalry. The Huskers certainly had dominant runs of success, including five wins in a row in 1982, 1999, 2000, and 2011-12. But with the way Nebraska has played in recent seasons, it seems longer than that.

The Hawkeyes had their share of disappointments this season as well. Iowa dropped back-to-back games against Michigan and Penn State, lost to Wisconsin, and couldn’t pick up a big win until it knocked off Minnesota to end the Gophers’ perfect season.

But the Hawkeyes are trending up and heading to a bowl game in a location that will likely have nice weather, while Nebraska can’t seem to figure things out, waiting for next season in the snow.

Iowa’s not Nebraska, and because it’s the week after Thanksgiving, that’s something Hawkeye fans can be thankful for.