Michael Bennet seeks to separate himself from Joe Biden moderation

At an event at a local Carpenters Union in Iowa City, Presidential hopeful Michael Bennet answered a litany of questions from Johnson County caucusgoers on topics ranging from dyslexia to halting a ballooning deficit. 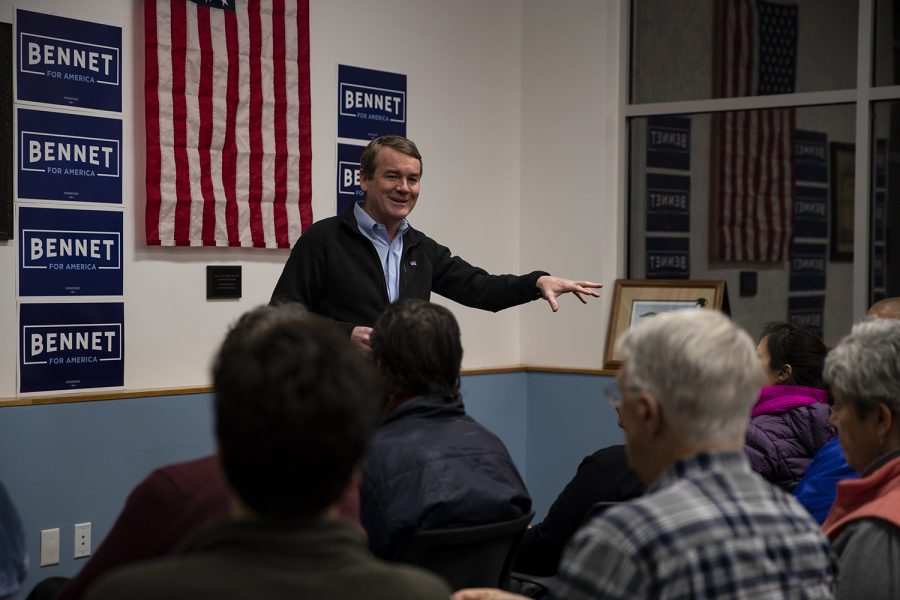 Sen. Michael Bennet, D-Colo., sought to differentiate himself from fellow nomination contender Joe Biden at a meet and greet at a carpenter’s union in Iowa City Sunday night.

“So when (former Vice President) Joe Biden says, ‘This will all go back to normal after we get rid of (Senate Majority Leader) Mitch McConnell,’ I say, that’s not right,” Bennet told the group. ”Because the last six years of Barack Obama being there, it wasn’t normal.”

Bennet, like Biden, touts his ability to garner support from and work with Republicans and independents. Bennet was elected to Congress in Colorado alongside Republican U.S. Sen. Cory Gardner. He has hesitated to endorse a government-run health insurance program, dubbed Medicare for All, releasing instead his support for a public-option program and a child tax credit.

His answer was a response to a question at the event, where an attendee asked Bennet to defend his stance as a moderate candidate, adding that she thought people were attracted to further-left proposals because she didn’t believe moderate Democrats made enough change.

“His (Biden’s) idea that if you just get rid of Trump it will all go back to normal,” Bennet said to reporters after the event. “I don’t think contends with the real structural issues that we’re facing as a country.”

Bennet polled at 1 percent in the most recent Des Moines Register/Mediacom/CNN Iowa Poll, while Biden came in with 15 percent of likely Democratic caucusgoers saying he was their first choice for the nomination. The Bennet campaign has two Iowa offices — one in Iowa City and another in Des Moines — and 18 paid staff members in Iowa.

“I would say we’re of very different generations,” Bennet said to reporters, referring to differences between himself and Biden. “And I think this is a moment in time when the American people want a new generation of leadership.”

He also made a minor jab at South Bend, Indiana Mayor Pete Buttigieg, saying that as the superintendent of Denver public schools, Bennet operated a budget three times that of Buttigieg’s municipality in Indiana.

“That (Denver) is a school district with 95,000 children, most of whom are kids living in poverty, most kids of color, and it has a budget that’s three times the size of a certain town in Indiana,” Bennet said to chuckles from the audience.

Former Johnson County Supervisor Pat Harney, 77, said he was deciding between supporting Bennet and former U.S. Representative from Maryland John Delaney in the Democratic caucuses. He called himself “more conservative than most,” and said Bennet had the right attitude when it came to public schools and lifting kids out of poverty.

Bennet rattled off answers to nearly a dozen questions at the event, from his stance on Palestinians’ right to return (he supports a U.S.-led, two-state solution, and doesn’t support boycotting American businesses that do business with Israel) to how public schools can help kids with dyslexia (Bennet himself has dyslexia and had to repeat the second grade).

One attendee, Linda Levey, 78, exchanged grievances with Bennet about the process of Iowa’s caucuses.

She said she plans to caucus still, but remains undecided, keeping Bennet in her top considerations.

Bennet said he would leave Iowa’s first-in-the-nation caucus status up to Iowa Democrats. Critics of the state’s role in the nomination contest such as fellow Democratic-nomination hopeful Julián Castro say the state’s demographics aren’t representative of the rest of the nation.

“I’ve got to play the hand that I’ve been dealt,” Bennet said, adding that on a national level he was very concerned with voting rights.

About 50 people turned out to see Bennet just before snow started to fall outside. Included in the bunch were several undecided caucusgoers and some public officials who are uncommitted so far — City Councilor-elect Janice Weiner introduced Bennet, and former and current supervisors attended to see the senator speak.

He visited the Carpenters Union Local 1260 after stopping in Cedar Rapids for a meet and greet with the Linn Phoenix Club. He’ll continue his tour today in eastern Iowa.