For the first time since 2001, the University of Iowa Faculty Senate conducted a central administrative review of the Office of the Senior Vice President for Finance and Operations. 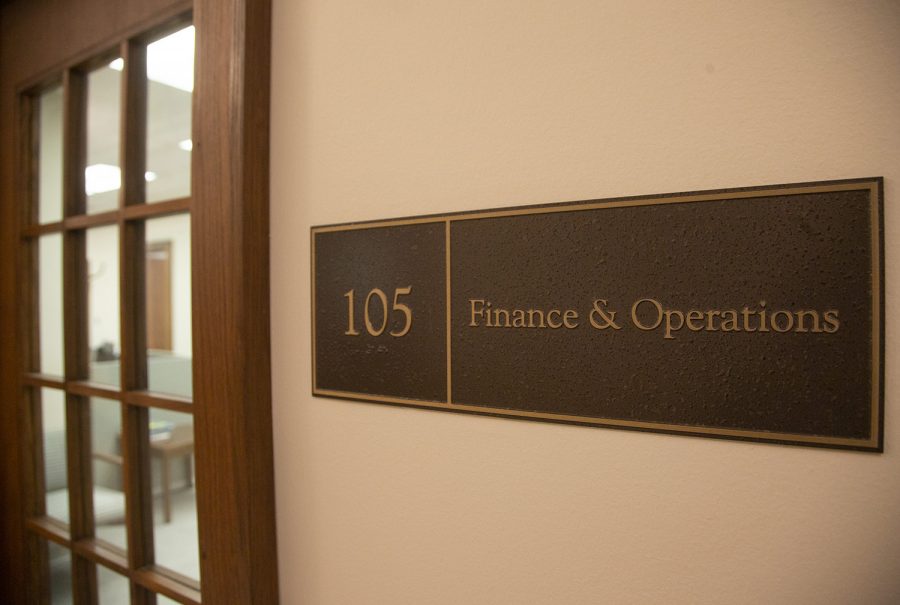 The office of Finance and Operations is seen in Jessup Hall on Tuesday, November 19, 2019.

The University of Iowa Faculty Senate recently released its review of the Office of the Senior Vice President for Finance and Operations and reported its leaders are innovative in exploring new revenue streams, but identified ways to strengthen communication.

The review committee’s findings were ultimately positive, said Committee Chair Joseph Yockey in an email to The Daily Iowan, but the committee noted the office may benefit from a change in its approach to communication and collaboration.

“We found that [Finance and Operations] leaders possess a wealth of knowledge and expertise,” Yockey said. “They are not remaining idle in response to the serious financial pressures facing the UI. They appear committed to finding new cost-savings innovations and opportunities for financial growth.”

A primary result of the review found that the relationship between the office and the Charter Committees on Campus Planning and Sustainability has grown distant in recent years, Yockey said.

The committees reported they were often not consulted about major campus initiatives until after key decisions had already been made, he added. The report identified the UI’s decision to purchase and later sell the University Club on Melrose Avenue as well as the construction and operation of the Aspire apartments on the west side.

Faculty Senate officers began collaborating with UI Staff Council, Student Government, and Graduate and Professional Student Government in response to the review to improve the reporting channels for charter committees, Yockey said, and groups are already working together more actively.

The report stated that tasks delegated to the Campus Planning Charter Committee seem trivial, such as considering the layout of campus signage or the decision to remove a single tree. Lehnertz said his office has worked hard to listen to the results of the review and spent the last several months refining its role and its interaction with Finance and Operations.

For example, Finance and Operations has begun redesigning the committee in the last couple of years to address big-picture issues, which may not provide immediate satisfaction if missions aren’t executed in the time a member’s time on the committee expires, he said.

Many important matters have been debated, tested, and improved by the work of the Campus Planning Charter Committee, which is composed of a well-rounded and interested group of university community members, Lehnertz said.

“From what I’ve understood from their feedback is that some of that had been lost or not done as consistently as we would like,” Lehnertz said. “And I think fitting the campus planning committee into an overall and refined review process of planning is good for all of us, and more enriching for those involved.”

Outside of the President’s Cabinet and the Council of Deans, there seemed to be confusion among faculty, staff, and students about the structure and mechanics of the new campus budget model, Yockey said. The committee identified that campus community members need to monitor the current budget model’s impact, he added.

According to Faculty Senate documents, leaders within the office are optimistic about the new model, which began in fiscal 2019 and places more monetary control with collegiate leaders.

Several people interviewed by the review committee, however, stated that the new budget model was implemented too quickly and without adequate explanation, the documents said.

According to Faculty Senate documents, the last administrative review of the Office of the Senior Vice President for Finance and Operations occurred in 2001. The University Operations Manual states that each central administrative office should be reviewed once every seven years.

The Finance and Operations self-study began in fall 2018, and the central administrative review ended in spring 2019 and was published earlier this fall.

Yockey stressed that all central reviews expand the faculty’s understanding about what central offices accomplish, and he was blown away by the scope of responsibility in Finance and Operations.

Lehnertz agreed, stating that the review was a good opportunity for faculty to investigate and discover more in-depth details about the operational parts of campus.

“We hope that part of what happens out of this is that we continue to examine ourselves on a regular basis, unit by unit, and as a whole,” Lehnertz said. “And we continue to listen to the university community … continue to refine, but also continue to educate.”