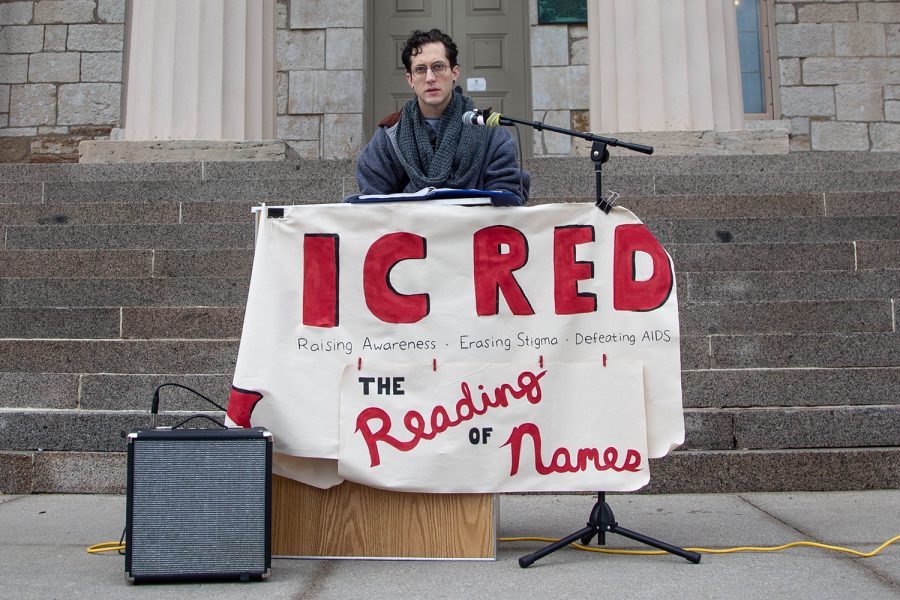 Names of people who have died from the AIDS virus are read aloud outside the Old Capital building by a volunteer on Wednesday, Nov. 20, 2019 as part of the University of Iowa's seventh annuad RED Week hosted by the UI student organization IC RED. The event lasted from dawn to dusk with readers taking five-minute shifts. It is estimated that nearly 681,000 people in the U.S. have died of AIDS since 1981.

The sky was a bruised shade of purple as four people, wrapped in scarves and tightly zipped jackets, stood outside the Pentacrest. The sun was just beginning to rise, a faint pink streak in the east as one person stood behind a podium with a microphone and began to read a list of names.

It was 6:30 a.m. Wednesday, and the first participants in the RED Week Reading of Names had begun. They would read that list from dawn until dusk, trading off with other students and faculty in five-minute intervals as they named those who had died from AIDS.

The reading came on the fifth day of Iowa City RED Week. The week of events was organized by members of IC RED, a student organization at the University of Iowa that works to shed light on HIV and AIDS.

The name RED stands for Raising Awareness, Erasing Stigma, and Defeating HIV/AIDS. Chelsea Higgins, the founder and president of IC RED, said the organization was ratified last fall, but RED Week was established in 2012 as a way to show support leading up to World AIDS day on Dec. 1.

“The mission of RED week is to just host a special time to get people talking,” Higgins said. “And a lot of our events are very diverse or kind of interdisciplinary, like painting, video games, coffee… You wouldn’t really think of that in coordination with some sort of health stigma removal.”

Among the attendants at the Reading of Names was Mayor Jim Throgmorton, who stood behind the podium and read names with the other participants.

“I’ve been doing this for many years,” Throgmorton said. “I think it’s important to recognize the fact that lots of people lost their lives as a result of AIDS. We need to honor their memory, and I come out here to help do that.”

In addition to the Reading of Names, events included a Walk It Out’s Model Reveal, painting with a brush and barrel, an education panel, a “Smash Bros” tournament, a trivia night, and “coffee for a cause.”

Haught is the Training and Organizing Coordinator for the Sero Project, which advocates for ending HIV criminalization. She has also been HIV positive for 26 years.

In her presentation, she described the shame she and her husband felt living with HIV and how they told the people in their lives that he had cancer instead of HIV.

“If you have cancer, people care. If you have AIDS, people judge,” Haught said.

As her presentation continued, she described the misconceptions surrounding HIV due to a lack of knowledge and education — something that RED Week works to combat.

“[A common misconception] is one that it is a death sentence. Obviously, living with HIV for 26 years, it’s not,” Haught said. “I don’t plan on dying any time soon. But it’s not a death sentence. However, we still have to deal with the stigma associated with HIV, because people still like to blame us, like we’ve done something wrong.”