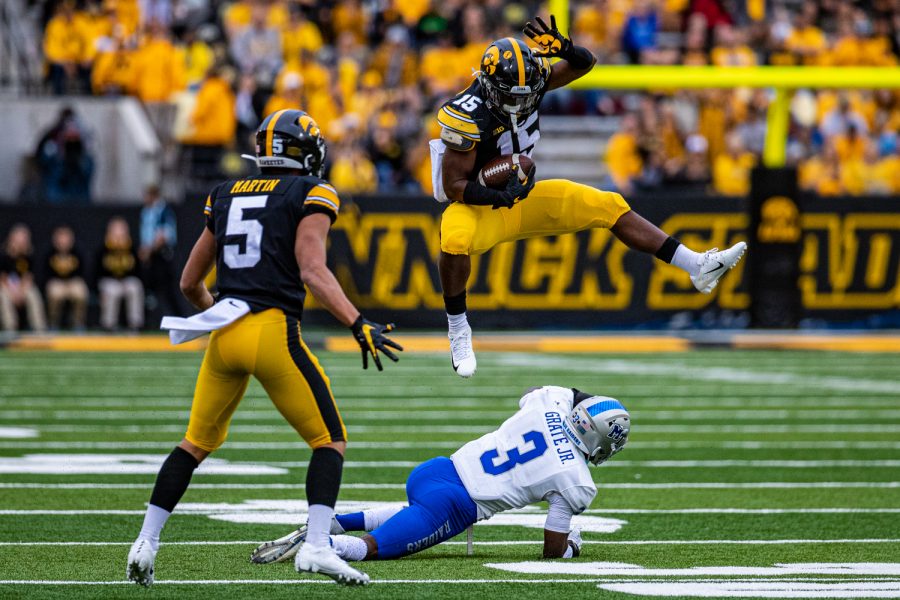 Iowa running back Tyler Goodson has conquered everything that has been thrown at him in his Hawkeye career, and it's earned him a starting spot.

True freshman Tyler Goodson has grown to become a favorite both in the Hawkeye locker room and to those who look at the program from the outside.

Iowa’s coaching staff has used running back rotations for years. Last year, three running backs shared the spotlight, and that was the plan again for the first nine games of the season.

Enter Goodson. Come Week 12, it was impossible for anyone to ignore the spark that he brought to the field for Iowa every Saturday, and he earned a starting spot for a signature Hawkeye win over yet another top-10 team. No. 7 Minnesota was toppled in Kinnick Stadium, 23-19, on a day when Goodson rushed for 94 yards and a touchdown.

“I was speechless when [running backs coach Derrick Foster] first told me,” Goodson said in a release. “For me, I didn’t focus on the fact I was starting, but focused on the next play and tried to make an impact that would help our team win the game.”

To get to this point, Goodson has worked hard and conquered anything thrown his way. He has appeared in all 10 games, rushing for 461 yards on 82 carries.

In his first collegiate game, the season opener against Miami (Ohio), he ran for 36 yards and had one reception. Against Middle Tennessee on Sept. 28, he had a career day, notching a season-high 97 yards on 12 carries.

And then, another career first came against Purdue on Oct. 19.

Quarterback Nate Stanley set up under center and dropped back to hand the ball off to Goodson, who was running straight towards the thick of the linemen battle. Five defenders on the line? No problem. He secured the ball and went airborne — leading with his left shoulder — to leap over guys much bigger than his 5-10 stature. Touchdown, Iowa.

Former Iowa running back LeShun Daniels described Goodson as having “Akrum Wadley-esque” skills, comparing Goodson to Wadley, a 1,000-yard rusher in the 2016 and 2017 seasons, because of the way he jukes defenders and makes things happen on his feet.

That was on full display against Minnesota when Goodson rushed for his second career touchdown.

“I got the ball and everything was clamped in, so I bounced outside,” Goodson said in a release. “A guy comes in, I give him the 1-2, stiff-arm, then another guy comes, I give him a stiff-arm and step out of the tackle. As I got down to the goal line, I put my head down and hoped for the best.”

Goodson ran straight into Minnesota cornerback Brandon St. Juste, pushing him back two yards, before catapulting himself into the end zone. Touchdown, Iowa.

“I gave him the nickname, I call him the human joystick because, man, he’s like you’re playing PlayStation or something,” Smith said on Sept. 28, following the Middle Tennessee game. “So, you press circle, he’ll spin. When you press triangle, he’s jumping over somebody. He’s one of our electric players. He’s crazy.”

He finished the Minnesota game with 13 carries, averaging 7.2 yards per carry and a long run of 26 yards.

“It boosts my confidence,” Goodson said in a release. “Coming in as a freshman, you don’t have confidence because you don’t know what the game is like. The speed is totally different, so you have to get used to that. Once the game slows down, then you start progressing as a player, and that’s when your confidence gets going.”

Goodson’s gain means Iowa’s running back rotation has shifted. Goodson, Mekhi Sargent, and Toren Young have had the bulk of the carries. Goodson and Mekhi Sargent were the only two backs to see carries against Minnesota.

Having a corps that benefits from making each other better — with the likes of Young, Ivory Kelly-Martin, and other veteran players there to teach Goodson the ropes — has been beneficial.

“Mekhi, Toren, and Ivory mean a lot to me,” Goodson said in a release. “I came in not knowing anything, and they taught me the playbook and made things slow down for me, especially protections. Protections are the hardest things to deal with. They taught me the fundamentals.”

Those protections are something that Goodson has picked up slowly over the course of the season. The Minnesota game was a turning point.

He picked up a blitz and ran forward to block for Stanley, lowering his right side to lift a Gopher over his shoulder and push him back down onto the ground.

“For a freshman to make that protection, then execute it, was really impressive,” head coach Kirk Ferentz said. “It’s even more impressive because he didn’t execute it during the week, the end of the week last week. I think that kind of shows you the kind of young guy he is. He learned from a mistake, carried it out there to the game field.”

Goodson’s learning capabilities has been something that has impressed the coaching staff from day one, something that ultimately has earned him a spot on the field.

His coaches say he absorbs the information he needs and makes an effort to become better each and every day.

“The kid’s hungry — I mean that because he’s willing to learn,” Foster said. “I think Tyler responds to coaching. I think you can kind of go back and watch him in previous games and see, OK, he can improve on this or he can improve on that, and I think he accepts that accountability and takes ownership in that. That’s what’s impressed me most about the kid, is that he responds to coaching, he listens, he loves the details.”

Ever since Goodson was in high school, he’s stepped up into any role thrown at him.

After attending North Gwinnett High School in a state and district that his mom, Felicia Goodson, said posed a rigorous opportunity both academically and athletically, Goodson felt prepared for what was ahead in his career at Iowa.

In high school, he would work out with a trainer after football practice. Then, he would go home, sit down, and focus on his academics for hours after.

That kind of mentality was always present for Goodson.

“When he was in high school, he was a junior, they won a state championship, and he literally saddled that team on his back without flinching,” Felicia Goodson said. “I just think, I don’t know that it’s something you can teach. I just think it’s an innate ability that he possesses.”

Coming from a tight-knit family that now full-heartedly supports him 832 miles away from Iowa City, looking for a community and family atmosphere was important to Goodson.

Differing from other programs, the focus was on things outside of football, too, when he visited Iowa.

“Tyler approached the recruiting process way differently than I think most guys do,” Felicia Goodson said. “I personally was kind of taken at how mature he was when he made a decision. He looked at things outside of football, he looked for [a] family-oriented environment, he’s looked for a city in a community that was kind of reflective of what he was used to.”

Goodson and his parents have a strong relationship. So, when he learned he would be starting, his mom was the last to know.

Goodson had wanted her to come to the game so he could surprise her with the career moment, but instead, she stayed home with Goodson’s youngest brother. They had gone to a movie, so she missed a pregame phone call from Goodson and his first-quarter performance of 65 yards on eight carries.

“It was overwhelming. I kind of say on social media a lot, as a parent, there’s nothing like watching your kids live out their dream,” Felicia Goodson said. “Tyler is a hard worker. He’s trained pretty much all his life for this time and this moment.

“To see all of the hard work and sweat and tears and stuff that he’s put in over the years paying off, I’m just really excited for him. It’s just an overwhelming feeling as a parent.”

Now, Goodson is a major part of the Hawkeye offense and family. He’s provided a spark, and even as a freshman, seems like he can handle anything.

Ferentz has talked about it countless times: whatever the team throws at Goodson, he handles with ease.

“Even since Tyler was a little boy, he’s always been extremely confident, very just independent,” Felicia Goodson said. “He had a boldness that I never had, that’s for sure. Never scared of a challenge.”