Impeachment probably won’t result in the end Trump's presidency, but that doesn’t mean it won’t matter in the long run. 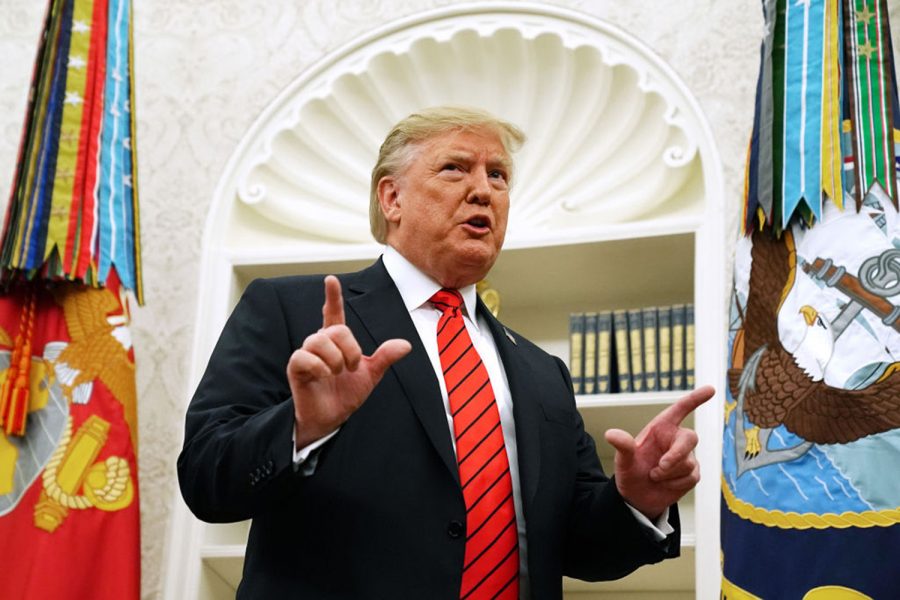 U.S. President Donald Trump gives pauses to answer a reporters's question about a whistleblower as he leaves the Oval Office after hosting the ceremonial swearing in of Labor Secretary Eugene Scalia at the White House September 30, 2019 in Washington, DC. (Chip Somodevilla/Getty Images/TNS)

It’s exceedingly improbable that current impeachment hearings will result in President Trump’s removal from office. Conventional wisdom among political observers holds that he’ll be impeached by the House but won’t be convicted by the supermajority necessary in the Senate. It would take at least 20 Republican senators defecting from the president. During this deeply polarized period in American history, actual forced removal of the president is unlikely even in a perfect storm.

Trump probably won’t be dismissed from the Oval Office as a result of impeachment, but that doesn’t mean that the proceedings are without any effect. In fact, impeachment has never culminated in the Senate’s removal of a president, but the historical implications are major.

President Andrew Johnson escaped by exactly one vote before failing to win his party’s nomination in the next election. President Nixon resigned before the House even finished its inquiry. President Clinton was the only one relatively unscathed by impeachment, but it remains a symbolic asterisk on his time in office.

The trend here suggests that impeachment’s effect goes beyond a legal process.

One could consider a House impeachment vote a “soft order” to remove. While it doesn’t and shouldn’t result in a president’s immediate exit, it marks the president as having done something wrong, whether it’s lying under oath, or, in Trump’s case, allegedly seeking a bribe from a foreign nation. This expires the president’s political capital, making them a de facto lame duck, and sticks them with a label they cannot easily remove.

Impeachment functions as a delayed removal from office in 2020 instead of the immediate future. No impeached president has ever received so much as a party nomination, much less a shot at reelection.

There are a few skeptics to this line of thinking. For one, many argue impeaching a president galvanizes their public support. This is unlikely to apply to Trump for a few reasons.

First, public-opinion polls on impeachment suggest the contrary. FiveThirtyEight has been tracking impeachment polling since March. They found that the process itself has 51 percent support and that Americans narrowly favor Trump’s removal altogether. This means that any potential backlash would be at least limited to less than a majority of Americans.

Second, the sole empiric suggesting backlash is Clinton, the data for whom could not be more unlike Trump. Clinton was impeached while he held relatively high public support, and his impeachment process held lower support.

Trump’s job-approval numbers are the opposite. His popularity has remained just under 40 percent since taking office. The American public — as noted above — supports the impeachment process of the president.

Another skeptical take is that we shouldn’t waste time on impeachment if Trump will just be acquitted by the Senate. This argument ignores what’s actually happening.

For one, Congress has been getting several things done. Capitol Hill has been abuzz with recent progress on the pending trade deal with Canada and Mexico. On Monday morning, a government shutdown was averted for the second time since the inquiry began. It’s also worth noting that Americans seldom pay attention to what Congress is up to, and lack of publicly recognized progress is not novel for Washington.

Lastly, it’s essential to remember that impeachment isn’t about legal removal from office, and it never has been. The process is a question of who can pitch a more compelling narrative to the public, and the result is always indirect.

Impeachment is not and should not be about even changing the Senate’s vote; it’s about persuading the public. And that’s certainly nothing new in politics.