University of Iowa students can now work alongside Iowa State University students to get an idea of how NASA implements their missions and instruments in a new Department of Physics and Astronomy course. 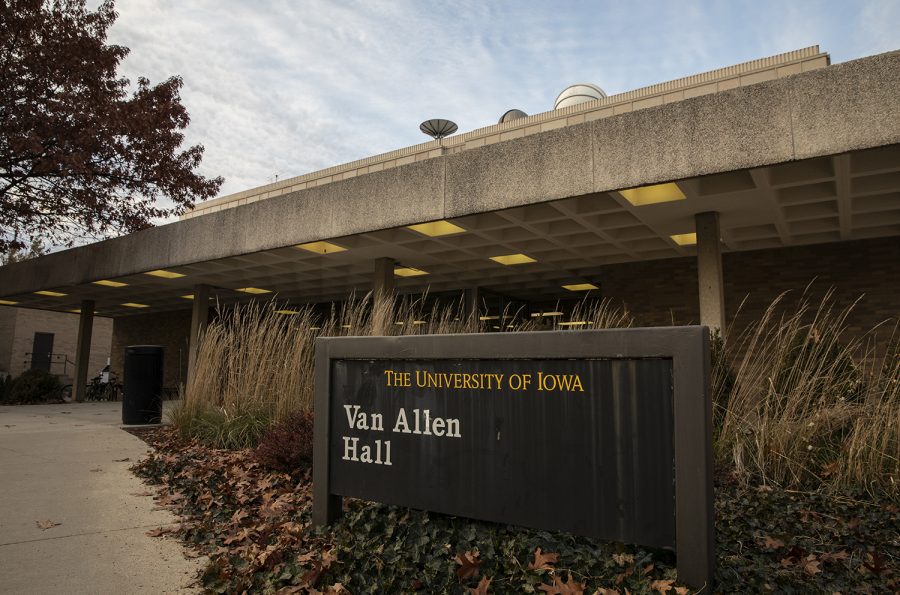 Van Allen Hall is seen on Monday, November 18, 2019. Van Allen is the home of the physics and astronomy department.

University of Iowa students will have the opportunity in spring 2020 to learn how missions are proposed and implemented at NASA and how basic types of space-based instruments work in a new hands-on course called The Edge of Space: Mission and Instrument Design for Spaceflight.

Alongside a team at Iowa State University, UI Physics and Astronomy Assistant Professor David Miles said the course will be hands-on in experimental space physics and instrumentation.

“Our modern technology is increasingly dependent on services that we deliver from satellites, making it important that we understand and can predict the challenges posed by near-Earth space,” Miles said.

Students will have ownership of their instrument, including initially proposing what they want to measure, completing the design, testing, and finally physically attaching it to the balloon for launch, Miles said.

UI Physics and Astronomy Assistant Professor Allison Jaynes said the course primarily involves small student groups proposing, building, and testing a sensor that will ultimately fly on a high-altitude balloon at the end of the semester.

The balloons will fly to an altitude of 20-plus miles above the surface, going through the bulk of Earth’s atmosphere to the “edge of space,” Jaynes said.

In addition to working in small groups of fellow UI students, the class will collaborate with students at Iowa State University and work to build upon each class member’s skills, Jaynes said.

“In the course, we’ll go over the basics of how missions get proposed and implemented at NASA and also how basic types of space-based instruments work,” Jaynes said. “Iowa State University supplies the balloon flights, so it’s a true partnership with another student group, as well. Our students will help with the launch and analyze their own data afterwards.”

The course is also open to those who may not be considering a field in astrophysics, because space missions are inherently multidisciplinary, Miles said.

“We hope that students from a variety of backgrounds will enroll and help us form diverse teams that can build many different types of instruments and experiments,” Miles said.

The UI Physics and Astronomy Department is experiencing a renewed interest in space exploration as burgeoning private companies are fundamentally transforming how people access space, Miles said. Similarly, the UI has made a significant investment in new faculty and facilities to revitalize its role in future space missions.

First-year UI physics major Kaelan Lloyd said he enjoys getting to talk about recent astrophysical discoveries as a physics student and is glad the UI is taking the initiative of making advancements.

“I think it’s important for us to keep our eyes up,” Lloyd said. “It’s great that we can learn more about these things and that there is a lot of future for discovery.”

Jaynes said the department thinks this is a good chance for students to have autonomy over their project beyond the experiential benefit, see how problems arise in a real system, and practice finding solutions to mitigate those problems.

“This really mirrors the experience that professional researchers have when building an instrument or experiment,” Jaynes said. “Sometimes those experiments fail, or you don’t get exactly what you wanted out of it, and this is a good lesson to learn early in experimental science.”