Michael Kemerer dominated, 20-0, in his return to the wrestling mat

Michael Kemerer received a large ovation when he ran out of the tunnel, but his third period technical fall was even bigger. 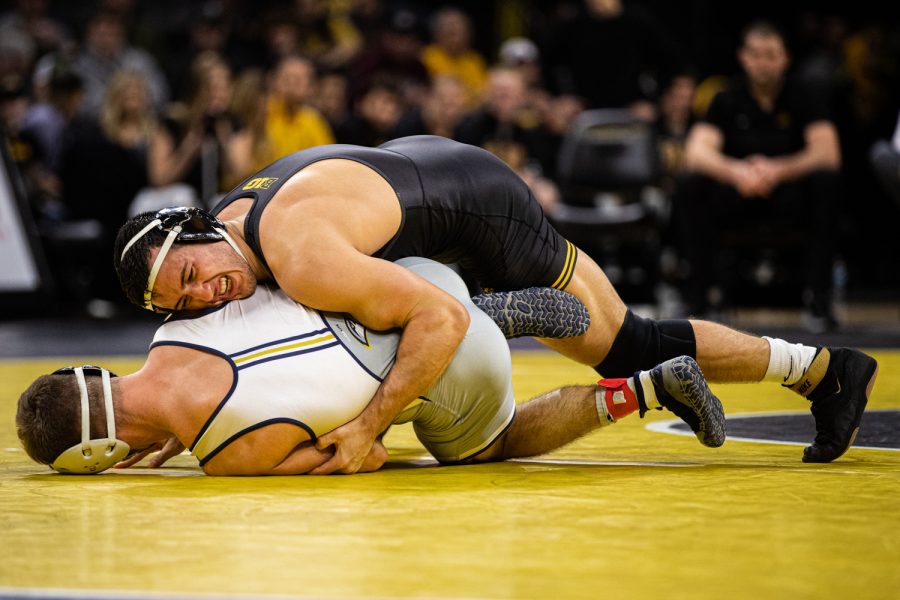 When the lights dimmed before Iowa’s 174-pound wrestler was even introduced, Carver-Hawkeye Arena was already on its feet. The match itself proved why.

In the third period, senior and two-time All-American Michael Kemerer turned Hunter Fortner on his back for the takedown and a four-point near fall. With a sizeable 20-0 lead, the match was over, and so was Kemerer’s year-long journey back to the mat.

“I wanted to get the fall, bad. You know, credit to my opponent, fighting on his back,” Kemerer said. “It would have been nice to go out with a pin, but it is what it is.”

Last season, Kemerer suffered a torn ACL before he had a chance to officially compete. He spent the year on crutches and with a brace on his shoulder after yet another surgery.

So, when the lights lowered and the loudspeakers blared with “Who Let the Dogs Out” by Baha Men, the moment of him running out of the tunnel onto the mat extended beyond wrestling.

“I try to keep myself pretty even keeled, pretty calm going out on the mat, but I’d be lying if I said I didn’t feel it, didn’t hear it, and, yeah, a lot of emotions going into the mat,” Kemerer said. “You know, it’s one match, it’s November, but it meant a lot. It was awesome.”

Just ten seconds into the match, Kemerer scored a takedown to take the lead. He followed with six points on near falls, all in the first period. An escape, a takedown, and another two-point near fall gave him the 14-0 lead before his final near fall sealed the match.

“Quick scorer, in and out. Sometimes you look at Michael Kemerer and the way he can execute and score — it’s so easy,” head coach Tom Brands said. “He’s a phantom in there sometimes. I thought he was in his element, and probably a good first time out.

The way Kemerer wrestles brings bonus-point advantages to the Hawkeyes. Quick on his feet for the score and dominant through the end of his match – whenever it may be – will be important for the Hawkeyes going into some of their major Big Ten duals later this season and Iowa State next weekend.

“We’re going to be going into Ames, Iowa, and we’ve got to be ready to go, and he knows that,” Brands said. “The thing about him is he’s always moving on to the next thing.”

Scoring bonus points wasn’t a problem for the Hawkeyes. Half of their lineup won with bonus points – two by major decision, two by technical fall and a pin by Tony Cassioppi. Getting Alex Marinelli and some of Iowa’s other big-time wrestlers into the point-scoring mix also will help the Hawkeyes going forward.

Iowa’s season only gets harder from here. Next Sunday it travels to Ames to face Iowa State, and No. 7 Wisconsin comes into town on Dec. 1 to open the conference season.