The Hawkeyes used bonus points to their advantage in Sunday's season opener. 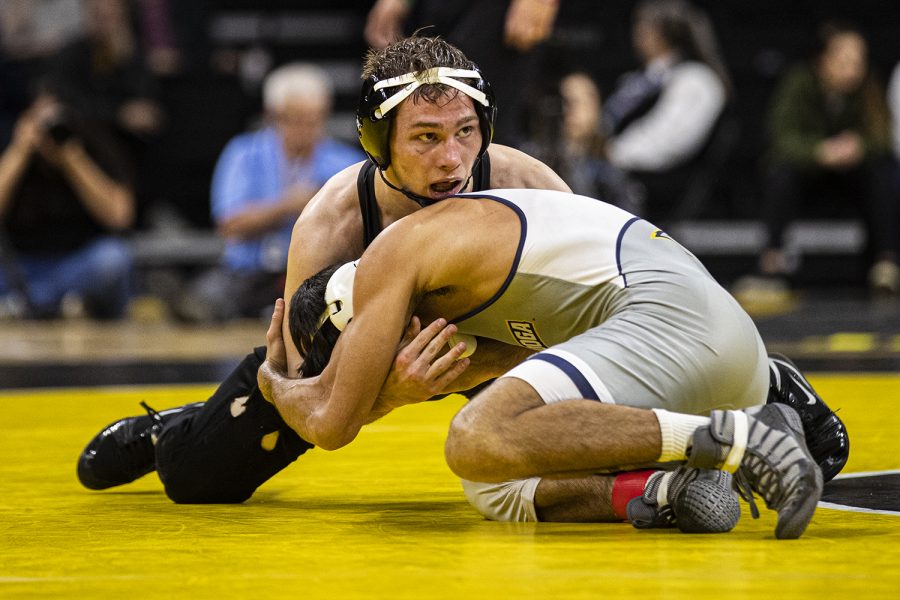 Iowa’s wrestling season started off with a dominant sweep of Tennessee at Chattanooga on Sunday, with the Hawkeyes taking all 10 matches for a team score of 39-0.

Starting off with Iowa’s reigning national champion at 125-pounds, No. 1 Spencer Lee wasted no time putting his team on top with bonus points. Three takedowns and a pair of four-point near falls propelled Lee over Fabian Gutierrez, 15-5.

Senior Paul Glynn was Iowa’s pick at 133-pounds, and he showed why late in his match. After falling down 4-2 to two early takedowns, Glynn put together a string of four-straight scores – two takedowns and two escapes – to take the lead. He held Wade Cummings off for the 11-7 win.

No. 2 Austin DeSanto came out strong in his first 141-pound Hawkeye match and finished it quickly. Four takedowns, a two-point near fall and two four-pointers ended the match by technical fall in the second period, 21-4.

Riding time was a point in both of Iowa’s matches before intermission. No. 5 Pat Lugo fought his way out of a 3-3 tie with an escape and two takedowns to go up 8-3. With riding time, he took the 9-4 win.

No. 2 Kaleb Young put Iowa up 19-0 at intermission after seven takedowns against George Carpenter. He won with riding time, 16-6, for Iowa’s third bonus-points match of the day.

Coming out of the break, No. 2 Alex Marinelli went up early and never trailed for a 9-4 win with riding time.

Next up, just nine seconds into his first official match since the 2017-18 season, No. 4 Michael Kemerer scored a takedown to go up 2-0. He followed with four-point and two-point near falls, all in the opening period. He finished the match early, earning the technical fall 20-0.

Nelson Brands stepped up into the 184-pound role and took the match, 8-4, after a late escape and takedown gave him a cushioned lead.

Despite giving up a takedown to close out his match, No, 4 Jacob Warner had enough of a lead to hold on for the 5-4 win.

No. 12 Tony Cassioppi ended the match on a dominant note for the Hawkeyes, notching the team’s only pin on the day in the first period.