Using the Visual Arts Building itself as a canvas, student artists of the UI School of Art and Art History showcased their talents and work throughout the space during the first Intermedia Open House of the year. 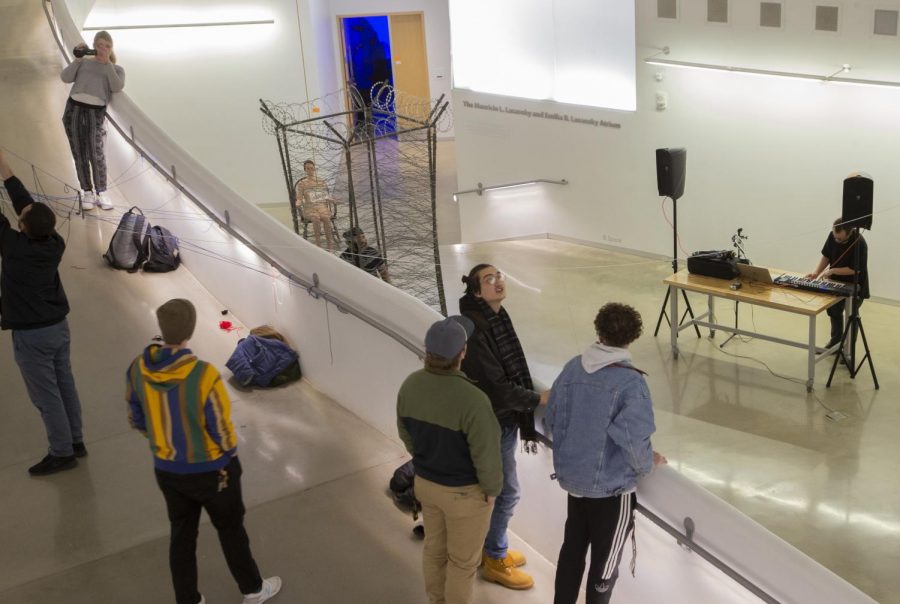 Upon walking into the Visual Arts Building, an utterly transforming slew of artistic performances awaited visitors at the School of Art and Art History’s first Intermedia Open House of the year.

Strange, atmospheric music echoed throughout the four levels of the building, providing an ominous soundtrack to the scene. Many of the artworks within the show involved body performance or encouraged physical interaction with the artists and their pieces.

Of the 48 participants of the night, 28 of them were undergraduate students, including senior studio arts major Annika Wahlberg.

“It’s a very community based show,” said Wahlberg. “What I like about intermedia is that there are no rules at all.”

At one presentation, artist Dadisi Curtis Jr. sat frighteningly still inside a cage of barbed wire, unmoving and unspeaking. Behind him, a woman dressed in a nude leotard sat in a rocking chair. A giant cube of ice dangled above her lap, hung precariously from a rope while it dripped melted water onto her legs. The performance lasted the entire two hours of the show.

Jake Jones, a graduate student in the intermedia art program, crouched in a room drowned in blue lighting.  Using a bizarre combination of guitar pedals and feedback loops on a mixing board, he created a concoction of harsh, grating sounds played through a large speaker. An audience formed around him while he worked, but his back was to them, seemingly unaware of the presence.

Should one have walked upstairs, and the powerful scent of citrus would overtake them, followed by a loud smacking sound. A man hit tangerines with a golf club, sending them soaring into a nearby wall. An orange name tag taped to the wall beside him read, “Derian Theverapperuma.”

Continuing my dive into the world of intermedia, I slipped under a web of yarn that covered half the stairwell and headed to the third floor. Luke Bonner, a student in Jake Jones’ Intro to Intermedia class, silently beckoned me to his station. A piece of paper on the table told visitors to guess a number between 1 and 100. If guessed correctly, the visitor could see his art, which sat hidden beneath a cloth. If not, a sad shake of the head was all the viewer received from Bonner.

Every nook and cranny was filled with some fascinating sculpture or flashing projected image. There were a few lighthearted pieces, but overall the show felt contemplative and almost somber. An element of protest was threaded throughout the show, but the subject of said protest differed largely between artists, and was often open to interpretation.

Ten minutes before its close, the sound of an electric guitar filled the building, playing a gritty, frantic riff. It signaled the climax of the show, and the consequent end. As the music came to a screaming halt some minutes later, a few people clapped. The atmosphere in Visual Arts Building noticeably lightened, and onlookers began to laugh and chatter.

A group of artists gathered after the show to talk about their experience with intermedia as an artform.

“It’s crazy,” said Olivia Patterson, third year art student at the University of Iowa. “It’s really broadened my horizons as to what art can be.”