Vets for peace aim to reclaim the meaning behind Armistice Day

Marking the 101st anniversary of the end of World War I, Veterans for Peace Chapter 161 gathered at the Ped Mall and Iowa City Public Library to honor those who have served, mourn those who have died, and reflect on shared dissent of ‘perpetual wars.’ 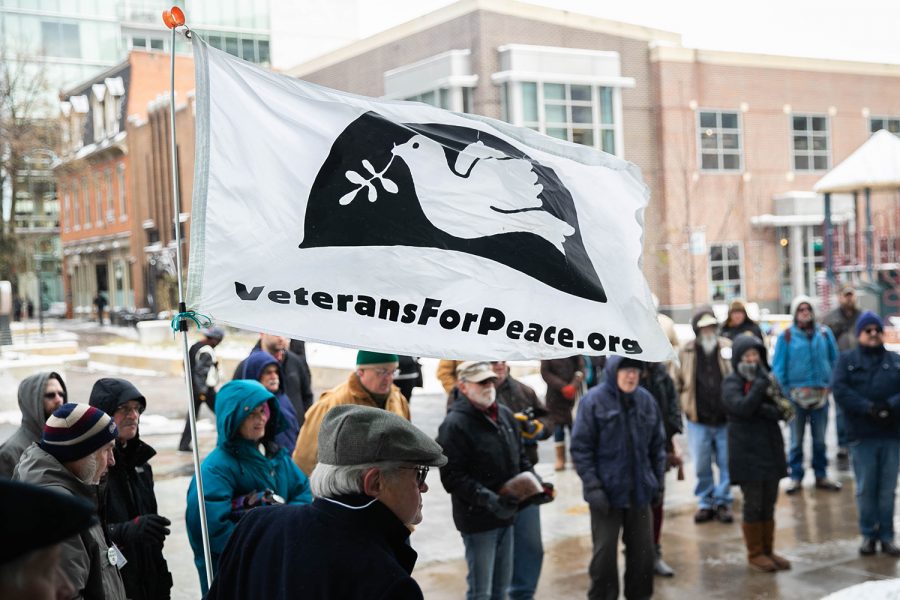 People attend a Veterans Day Rally at the Ped Mall on Monday, November 11, 2019.

The brutal winter wind caused wisps of snow to gather on the hats and scarves of a small group of veterans who were gathered at the Pedestrian Mall Monday morning — in accordance with the 101st Armistice Day, Veterans for Peace Chapter 161 took the day to remember those who have served and reflect on their perceived uselessness of “perpetual wars.”

The ringing of church bells at 11 a.m. has signified the end of World War I for 100 years — as the bells rang on Monday morning, there was a palpable sense of remembrance, sorrow, and pride amidst the crunching of snow and bellowing of wind. Following a brief ceremony, which featured Iowa City Mayor Jim Throgmorton, a veteran himself, the group congregated in Meeting Room A of the Iowa City Public Library to share anecdotes from their time in the armed forces.

Despite the meeting room’s comparatively warm atmosphere, the palpable feelings of sorrow and remembrance were only amplified by the stories of the 30-or-so attendees.

Steve Hanken, a Vietnam veteran, said there are more people to think about than veterans when discussing the casualties of war. After serving for two years, he said he was “incredibly saddened” by the droves of veterans who committed suicide in the war’s aftermath.

According to reports Hanken read, he explained that due to suicide, the number of casualties has essentially doubled since U.S. forces withdrew from the country in 1973. Others were impacted by the tools used in warfare, he added.

“A friend of mine had [the impact of] Agent Orange passed down through his children,” Hanken said. “One of his daughters is allergic to just about everything, and one of his daughters has half of a brain — there’s not a lot of help for those people because they’re not veterans. It was quite by accident that an older physician discovered she had half of a brain … sometimes the impact of that stays for generations.”

Hanken also shared an anecdote about a relative of his who fought in World War I — for the other side. Although he said, “Armistice Day was a little different for him,” he recalled the lengths to which German soldiers went to flee.

“He told me that no one knew what was going on,” Hanken said. “Everybody wanted to go home. He told me, and I couldn’t believe it, that when the trains were running, they would fill up with people. Other soldiers would grab onto the side of the train and hang on for dear life and there would be a pile of bodies at the end of every tunnel; people who were just trying to get home.”

Veteran Ed Flaherty, who enlisted in the Army in 1966, said the journey home continues to be tumultuous for veterans to this day. Flaherty recalled the taunts and insults thrown at veterans returning home from Vietnam and added that there has been a “disgraceful” resurgence of anti-veteran rhetoric in recent months. To him, what is more sinister than this rhetoric was the Trump administration’s decision to pull troops out of Syria, which left “our Kurdish allies defenseless.”

“Why, instead, are we sending more troops to Saudi Arabia?” Flaherty asked. “So they can protect themselves from the Iranians or they can support the killers of American journalists? As a veteran or armed service member, liberal or conservative, pro-war or anti-war, I don’t understand how a service member could tolerate that [decision.]”

These decisions, according to University of Iowa graduate and retired FBI whistleblower Coleen Rowley, are fed to the masses through the military-industrial complex, which former President Dwight D. Eisenhower warned about during his final speech in the Oval Office.

“I was watching the news this morning and they took sad stories from the Vietnam War and others, and they twisted them into uplifting stories in praise of the military,” she said. “Your stomach just sinks watching it because as we’ve heard today from poems and first-hand accounts there is death and destruction everywhere … most people fall into thinking, ‘Isn’t this wonderful? We’re so great because we’re American,’ and the fact that people think we can make something good out of war is what has made it perpetual.”

This sentiment was echoed by Danny Sjursen, a retired Army strategist and West Point instructor. Sjursen, who spent nearly two decades in the armed forces, said Armistice Day is an opportunity to honor those who have served but also ask, “Do I want my children to die in a war that I fought in?”

“Armistice Day has been hijacked, it’s been sanitized, and now it’s celebrated as a ‘veteran’s thing,’ ” Sjursen said. “I think that’s a crime because Veteran’s Day has become something where it’s almost a compulsory mission to just thank a veteran. Thank a veteran and that’s all you have to do — that strips all of the original meaning out of the day.”

Sjursen said moving forward, thanking a veteran should be part of Armistice Day, but more important is ending the “endless wars” that continue to “mint” veterans in the first place.

“I served in Kandahar Province with the 3rd Brigade of the 10th Mountain Division, the Spartans,” he said. “Our motto is that we would come home with our shield or on it. Those are the two options we were told — that we would come home in glory or come home as a dead body — but it took me years to realize that there is another option, to throw down the shield in the first place.”