A new collaboration was formed to provide financial support for neighborhoods in Iowa City to help improve public health. 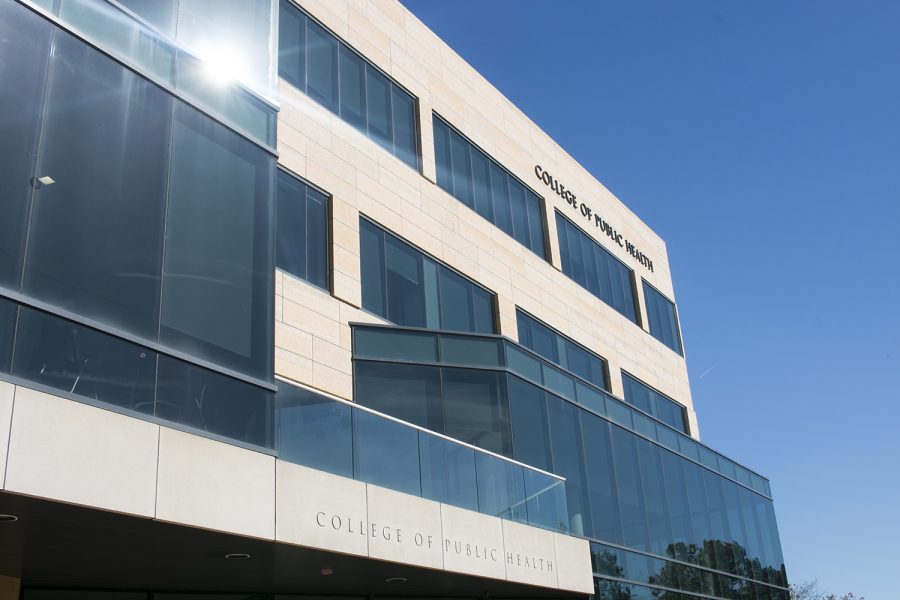 The College of Public Health on Wednesday, Oct. 18, 2017. The college is partnering with other organizations to improve community health.

Through the City of Iowa City, the University of Iowa College of Public Health, UI Hospitals and Clinics, and the UI Stead Family Children’s Hospital, organizers hope to bring about change through their new project.

The city recently received a health care planning grant from the Robert Woods Johnson Foundation “Invest Health” project and a Sanford Health product donation called the “Reinvestment Fund.” These aim to bring people from different sectors together to improve public health, especially neighborhoods that have higher concentration of low-income residents.

They are part of two kinds of kits, Hightshoe said. In total, the city has 350 kits and will provide them to children ages 2 to 5 and 5 to 12 who are involved in the Community Prescription project, called “Prescription for Play.”

According to Hightshoe, the kits would also include things like yoga cards, frisbees, card games that encourage movement, sidewalk chalk, jump ropes, and a scavenger hunt. Within the kits, there are also maps provided for people to use.

The maps serve to tell people how long it takes them to walk to a park and get an idea of what they can do for activity in that park, Hightshoe said. The city plans to utilize the funding for other opportunities for the Prescription for Play project, as well.

“If we get a [child’s] prescription from the doctor, and it’s called the Prescription for Play, we forgive all that cost, so it’s free to the child that has the prescription,” Hightshoe said.

Hightshoe said the city had planned for a 50-percent discount for patients in low-income households if they filled out paperwork for applications.

Prescriptions for Play is just the start of the community collaboration, said Deputy Director of Iowa Institute of Public Health Research and Policy Vickie Miene. The collaborators all intend to meet later this month to discuss further efforts.

“We help to convince the partners, and then we also help to promote the program,” Miene said.

The meeting would be about the next steps and future plans for the collaboration, she said.

“The low-income threshold amount is based off a formula that our front desk staff uses,” Barker said. “That takes into consideration the applicant’s income and family size.”

The application form can be obtained at the front desk at both the Robert A. Lee Recreation Center and the Mercer Park Aquatic Center, but children that had received a “Prescription for Play” will automatically qualify for the discount, Barker said.

Fishbane-Gordon said Prescription for Play is mostly for those children, and they would receive prescriptions from doctors in the children’s hospital during their visit.

She also said she is looking forward to follow-up visits, hearing feedback from patients, and hearing how helpful the kit items are.

“The kids are usually excited to get the kit items,” Fishbane-Gordon said. “But because we just started this program in August, many of the follow-up visit haven’t happened yet.”