2 years ago, she was pre-med at the UI. Now, she’s running her own organic farm.

Only 1 in 500 Iowa farmers are women under the age of 25. This first-generation organic farmer is one of them. 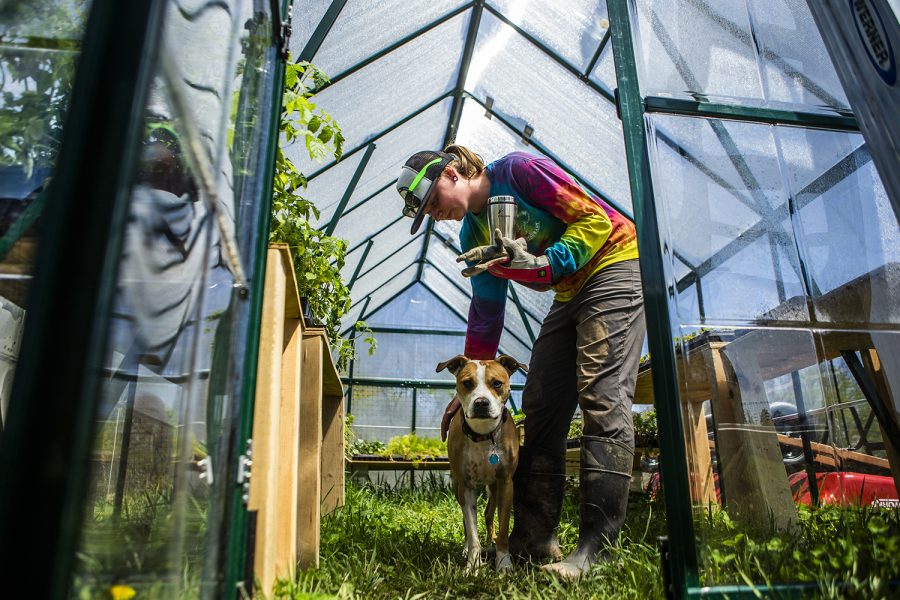 Corbin Scholz and her dog Nina hang out in the greenhouse on Scholz's organic farm near Solon, Iowa, on May 4, 2019.

After a June of tornados and a July of drought, Corbin Scholz welcomed a mild August.

The 24-year-old Iowa farmer gazed at a crop of corn that didn’t make it through the dry spell and a row of eggplant that at least the insects enjoyed. She was grateful for plump zucchini, ripe cherry tomatoes, crisp basil, and thriving fennel burgeoning out of the dirt that she had turned with a small push plow that spring at her three-acre farm near Solon, Iowa.

She was disappointed and anxious that August afternoon after only selling a small fraction of the produce she had brought to the Cedar Rapids Farmers Market the weekend before, but her biggest worry at the moment was her turkey, Patrick, sick with an infection in his foot. Scholz called a friend over to her farm to help load the turkey into her truck to take to the veterinarian.

Scholz was burnt out, exhausted from months of plowing, seeding, weeding, and harvesting as the sole worker on her land. For 10 hours a day, seven days a week from April to October, she labored over her fruits and vegetables while investing all the money she made back into the farm. Throughout her first year, she purchased fences, a plow, a greenhouse, and a chicken coop, which lost its roof in a summer storm.

Despite the difficulty of this August day, she still showed a hint of passion from back in January, when she first decided to lease a field of grass and start Rainbow Roots Farm.

“I’m tired, and mentally and physically exhausted,” she said in August. “But I’m so excited for next year. I want this year to be done so next year can start.” 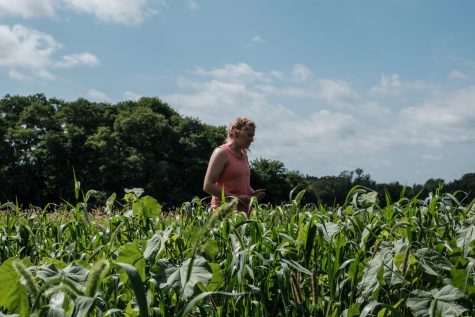 Corbin Scholz walks along her crops at her farm outside of Solon, Iowa, on Aug. 29. (Wyatt Dlouhy/The Daily Iowan)

Her passion for farming wasn’t always so pervasive, however. After graduating from the University of Iowa in 2017 with a degree in human physiology, Scholz’s mind was on medical school and taking over her mom’s podiatry practice. But after college, she started questioning her career choice.

“I didn’t want to work inside, pushing pills on people,” she said.

She preferred proactive healthy eating over treating illnesses that might have never manifested with a balanced diet. After working at a ski resort in Colorado and on a succulent farm in Hawaii, Scholz realized she wanted to pursue something she knew nothing about — organic farming.

Young, female farmers like Scholz are rare in Iowa. Farmers under the age of 25 who are the decision-makers on their land, known as the “principle producer,” made up less than three-fourths of 1 percent of all principle producers in the state of Iowa in 2017, U.S. Department of Agriculture data show.

The aging Iowa farmer population means that in a matter of years, Iowa’s farm economy may face a shortage of people to run them. As older farmers retire, farmers like Scholz may be vital to the sustainability of the industry.

“I think that the sector of actual food that people eat is going to grow — vegetables and fruits and grass-fed beef and pork and chickens,” he said. “There’s plenty of consumer demand for that now, and it tends to be easier on the land and can increase soil health.”

A farm can get organic certification if no synthetic chemicals — such as pesticides, herbicides, and artificial fertilizers — have been used on the land in at least three years, and no crops have been genetically modified. Organic farming helps retain nutrients in the soil and even reduces the impacts of climate change by emitting fewer greenhouse gases and incorporating harmful carbon from the atmosphere into the soil, a 2010 Ambio report said.

To pursue her newfound passion, Scholz enrolled in an organic farm school in Seattle, Washington, and for eight months at over 40 hours a week, she learned everything from driving a tractor to managing the finances and marketing of an organic farm. 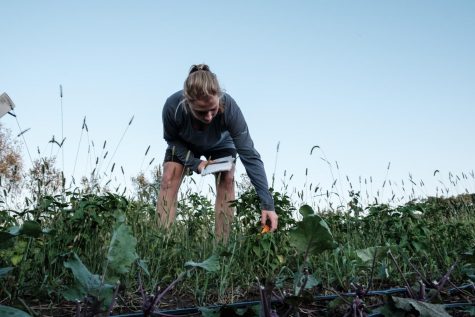 Corbin Scholz checks on a pepper at her farm outside of Solon, Iowa, on Sept. 23. (Wyatt Dlouhy/The Daily Iowan)

In November 2018, she sold her car and bought a truck and a trailer for the two pigs that she had bought to save from slaughter at $700 each. She drove 40 hours from Seattle back to her parents’ house in Iowa City — stopping every eight hours to let the pigs out — and decided to start her own farm.

“This is a super comfortable atmosphere, a really liberal population, and open-minded, starting to get into the organic movement,” Scholz said. “I was like, this would be a really awesome place to farm, and I should give back to this community that has given me so much growing up.”

She took out a $20,000 loan and leased three acres for $900 per year where she could keep her animals, who all have a role to play on the farm. The pigs Breakfast and Nubby help with naturally tilling the land, Patrick the turkey serves as a protector against birds of prey, and 29 chickens lay eggs. 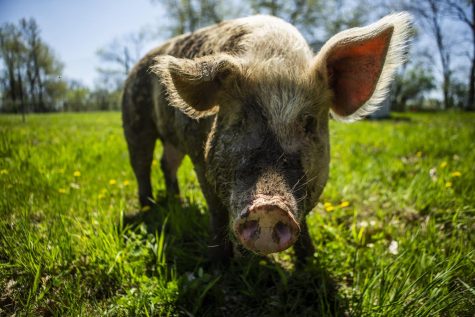 Breakfast, one of Corbin Scholz pigs, serves as a natural method for tilling the land. Scholz bought Breakfast and Nubby, another pet pig, for $700 each to save them from slaughter. (Katina Zentz/The Daily Iowan)

Each week, Scholz boxed up and delivered fresh eggs and produce to 30 community-supported agriculture customers who each invested $420 at the beginning of the season to receive 23 weekly deliveries of eggs and produce.

She built a small greenhouse, where she would start her seeds of tomatoes, chard, cauliflower, beans, fennel, cabbage, and lettuce, and turned over the soil on her field, where she would transplant the seedlings. Every day began and ended with routine chores — feeding the animals and collecting eggs from the chicken coop. Then she would harvest vegetables, weed here and there, and transplant from greenhouse to ground. In the afternoon, when it was too hot to work outdoors, she would go home to answer emails, organize invoices, and handle the “office work” that comes with running a business.

After establishing her farm, one of her first goals was to get organic certified. Because her land had been a hay field for 15 years before she leased it, it was eligible for certification by the USDA as an organic operation. She bought $2,000 worth of compost to nutrify her field, planted flowers on the sides of her beds to attract pollinators to the fields and detract bugs from the produce, and spent hours picking weeds out of the soil.

Another goal was to get into a farmers market. When she checked in February, there was already a waitlist for the Iowa City Farmers Market, which runs twice a week from May to October. She did manage to get in to the Cedar Rapids Farmers Market — a larger market that takes place on eight Saturdays throughout the season. 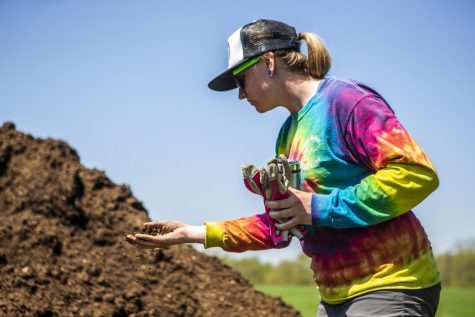 Corbin Scholz examines a handful of compost on May 4. She spread the pile of compost on her three-acre farm to add organic material to the soil. (Katina Zentz/The Daily Iowan)

But, selling produce at the farmers market didn’t turn out like Scholz had hoped. Often she would bring $600 worth of produce but only sell $100 worth. Eventually, she stopped going.

Next year, she plans to drop the market and increase her community-supported agriculture from 30 members to 45. Instead of weekly deliveries to her customers, she will set up a pick-up station where she simply puts out her products farmers-market style and hands out produce to CSA members.

After learning the hard way about what can and can’t grow in Iowa’s climate, Scholz plans to change up the crops she plants next year, focusing on vegetables that were not only successful but also popular among customers. She keeps detailed notes in her crop journal of everything that happens on her farm for her to look back at next year.

“I’m going to farm smarter, not harder,” she said.

Although she didn’t make any money this year to pay herself, she invested in new equipment such as a compost spreader and matting to suppress weeds that will make her life easier next season, and hopefully allow her to take a cut of her profits as income in 2020.

To make ends meet this year, Scholz works part-time as a receptionist at a clinic and coaches soccer at City High School. But finances aren’t the only thing that makes her job challenging. Working alone every day, each task on her to-do list more taxing than the last, emotional support has been key for keeping her spirits up throughout this first year. Her parents, who she lives with in Iowa City, have encouraged her since the beginning and allowed her to keep chickens in their basement and run her business while living at home.

Scholz’s best friend, UI law student Meg Goodson, has not only helped her physically on the farm, but has been a voice of support and a source of intellectual stimulation during weeks of loneliness on the farm. 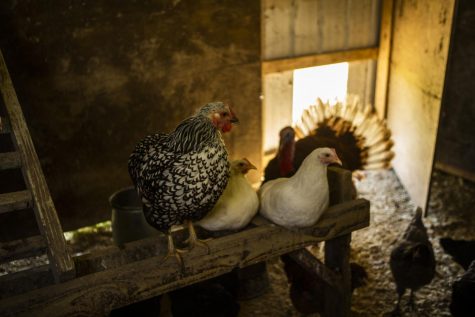 For Goodson, this year of friendship with Scholz has been a learning experience about how the environment works and what needs to be done to heal it.

“Corbin has opened her eyes and really educated herself on what the issues are, more so than a lot of people our age who say they’re environmentally cognizant,” Goodson said, “and they are, but not to this level of understanding the details. I learn things from Corbin every day.”

Though she spent thousands of dollars and went through months of exhausting labor, Scholz keeps her head up by remembering why she chose to start Rainbow Roots Farm.

“Being able to plant a seed, seeing a seed literally go from my hand into the soil, and picking a bell pepper and handing it to somebody, and them sending a picture of what they cooked with it,” she said. “It doesn’t get any better than that.”

While making her customers happy with healthy food, the benefit her farm will have on the environment keeps her motivated to keep going for years to come.

Someday, she hopes to buy land that was once used for conventional farming and use a portion of the land to continue growing fruits and vegetables, while converting the rest into natural prairie that can restore native landscapes, sequester carbon from the atmosphere to reduce climate change, and revitalize the soil to the richness that made Iowa’s land once so prosperous for agriculture. 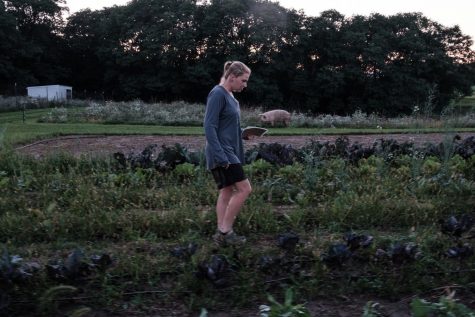 Corbin Scholz walks down the rows of crops on her farm near Solon, Iowa, on Sept. 23. (Wyatt Dlouhy/The Daily Iowan)