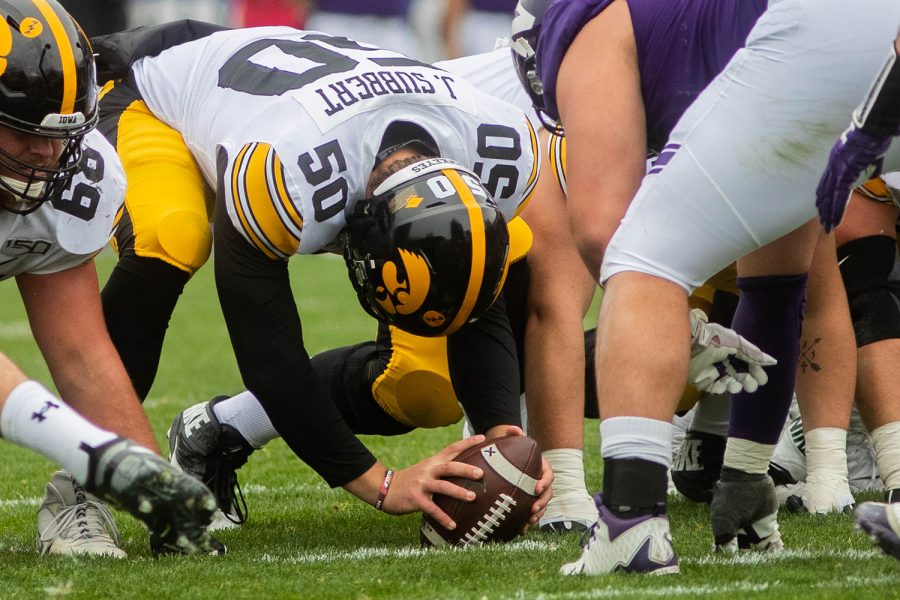 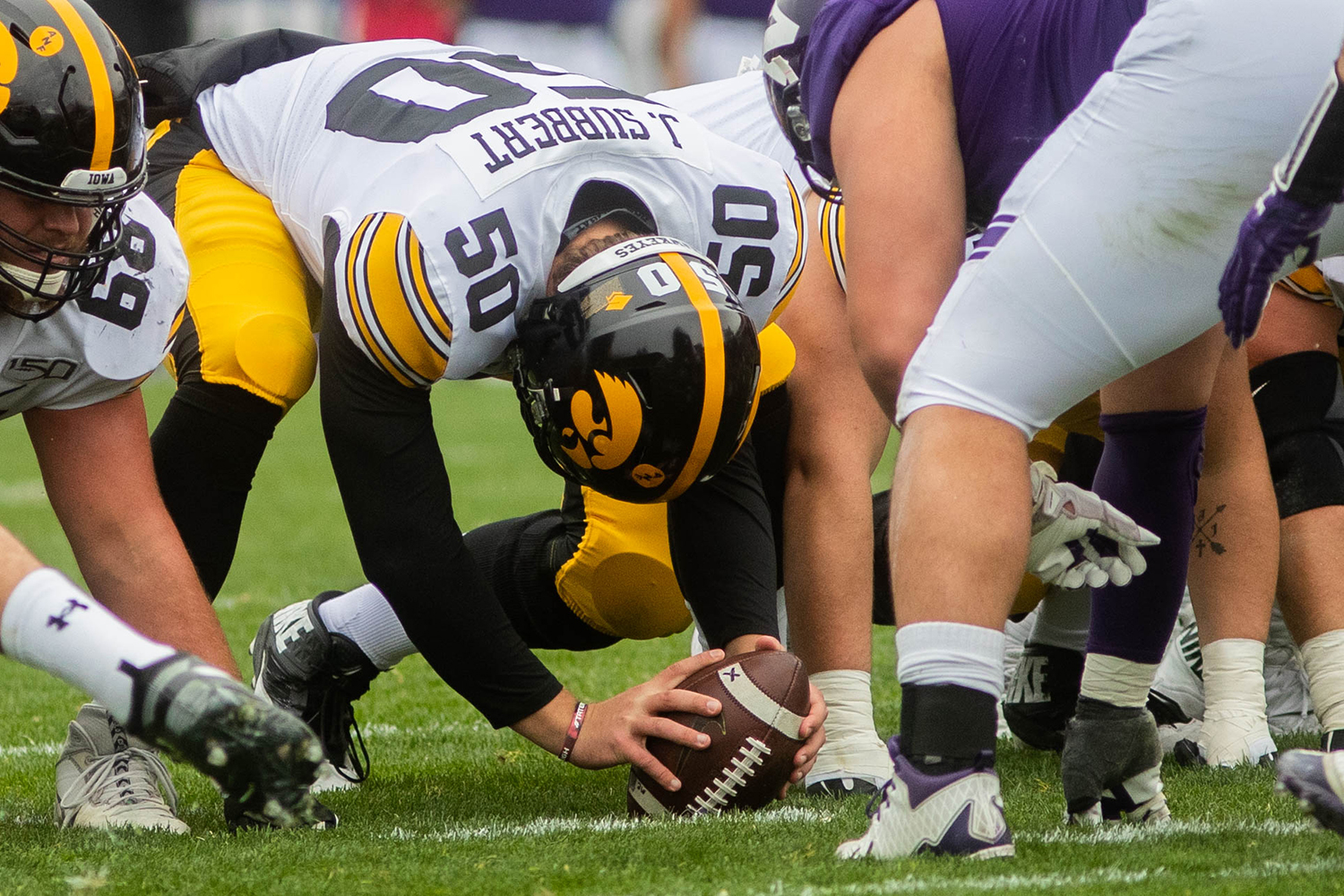 Iowa has found success in long snapping recently, and a lot of that can be traced back to each new snapper learning from the one before them.

For Kluver, it was one of the best Hawkeye long snappers of all time.

Before Kreiter moved on to the NFL — where he was named to the 2018 Pro Bowl as a member of the Denver Broncos — he showed Kluver the ins and outs of being a Hawkeye specialist.

Kluver used that knowledge as a starter for the next four years. Eventually, he passed that on to Subbert, who hasn’t snapped an unplayable ball this season. 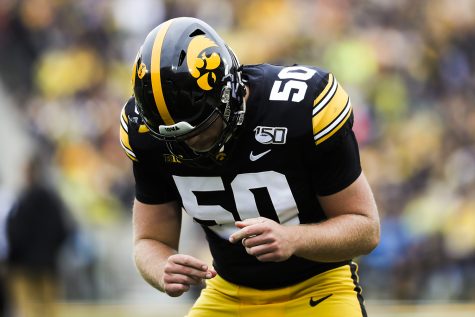 Iowa long snapper Jackson Subbert warms up during the Iowa football game against Purdue at Kinnick Stadium on Saturday, Oct. 19, 2019. The Hawkeyes defeated the Boilermakers 26-20.

“When I came in, I was definitely not ready to snap in a Big Ten game,” Subbert said. “I think that’s pretty clear. You can go back and look at it. [Kluver] was a great long snapper, so not only the mental part of the game, but [he helped with] the physical aspect of it, too. Maybe my grip, what can be changed — just have another set of eyes.

“He started for four years, so this is a guy that has snapped a ton of games — as many in Iowa history. So, just knowing what has worked for him and to be able to put my own little spin on it and just see him work throughout the game, see his routines before the game, during the game, during practice. Just modeling a lot of my stuff after him, I think has been incredibly beneficial.”

The impact Kluver had on Subbert can’t be forgotten. It’s led to success on the field and kept the stretch of successful snapping going in Iowa City.

“It makes me real happy to know that he thinks I actually helped him out,” Kluver said. “I think it’s awesome to see what he’s been able to do. Again, no one really noticed, but I definitely noticed. Other people noticed he stepped right in, and he’s taken the reigns, and there’s been no missed beats.”

Even before they arrive at college, long snappers have a different experience in the recruiting world.

Most snappers aren’t the heralded blue-chip recruits that fans are raving about on message boards across the Internet.

“It’s definitely different,” Kluver said. “You’re not getting all the graphics made for you. You’re not getting whole fan bases to follow you on Twitter, come after you, and everyone’s really trying to get you there. No one really knows who you are.”

Instead, they make their names known through camps.

While Subbert played tight end and defensive end in high school and Kluver was a linebacker with opportunities to play at Division II schools, both found that snapping presented them with a better chance to play at the Division I level. 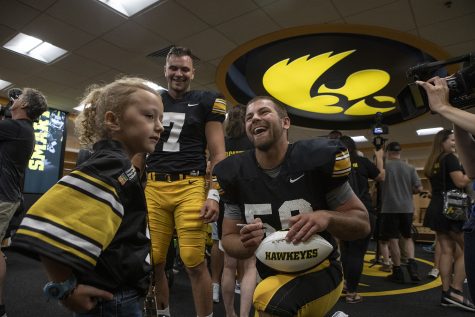 From there, they performed at camps and eventually found their way onto Iowa’s radar.

When Kluver arrived in Iowa City, things were unsurprisingly different from other position groups.

Kluver said that before current special teams coordinator LeVar Woods took over, there was just a full-time assistant who served as a supervisor for the specialists.

Outside of that, the group held their own meetings and did their own things at practice when the punt or field-goal units weren’t called upon.

For the entirety of Subbert’s time as a starter, though, Woods has been there with him, and he sees the continuity of consistency from Kluver to Subbert.

“What’s impressed me about [Subbert] is that his first game last year, the first opponent was his first game playing,” Woods said. “He hadn’t taken a snap any other time. So, to be able to be thrust in the situation and be able to handle some of the things he did, I thought was pretty impressive.”

Although Kluver was a four-year starter for the Hawkeyes, he didn’t become a household name until the latter half of his senior season.

With a 31-17 lead in the third quarter, Iowa faced a fourth-and-4 from the Buckeyes’ 21-yard line. Lined up in a trick-play formation, Kluver snapped the ball to punter Colten Rastetter before breaking out into a seam route down the middle of the field.

Wide open, Kluver hauled in the pass to set the Hawkeyes up with first-and-goal on the 2. From there, quarterback Nate Stanley — with future Cincinnati Bengal Sam Hubbard wrapped around his ankle —  found tight end T.J. Hockenson in the back of the end zone to put the Hawkeyes up 38-17 and effectively put the game out of reach. 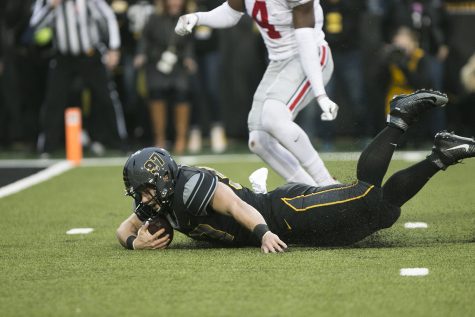 Iowa long snapper Tyler Kluver makes a reception off of a trick play on fourth down during the Iowa/Ohio State football game in Kinnick Stadium on Saturday, Nov. 4, 2017. The Hawkeyes defeated the Buckeyes in a storming fashion, 55-24. (Joseph Cress/The Daily Iowan)

In a key moment, a long snapper stepped up in a noticeable way, putting the cherry on top of a wild night.

“Even though long snappers know that they have a huge impact, you feel, and that impact is felt much less than any other position on the team,” Kluver said. “There’s just not a lot of sway that you have in the game as far as winning the ballgame. To have that feeling of, ‘Wow, I really did something,’ that was cool.”

After finishing the season and graduating, Kluver parlayed that play into social-media fame and launched the “Washed Up Walkons” podcast with former teammates Drake Kulick and Kevin Ward.

Kluver is changing the stereotype that long snappers aren’t popular figures, as evidenced by his more than 6,000 Twitter followers.

Now, with Subbert entering the final stretch of his career, he could be looking at a similar future.

“You know, I would hope so,” Subbert said about getting the opportunity to catch a pass. “My fingers are crossed, but I’m not sure if that’s going to happen for me or not.”