UI freshman Sydney Mayes earned her spot as the editor-in-chief of Lit Ink Mag by showcasing her poetry and leadership skills. 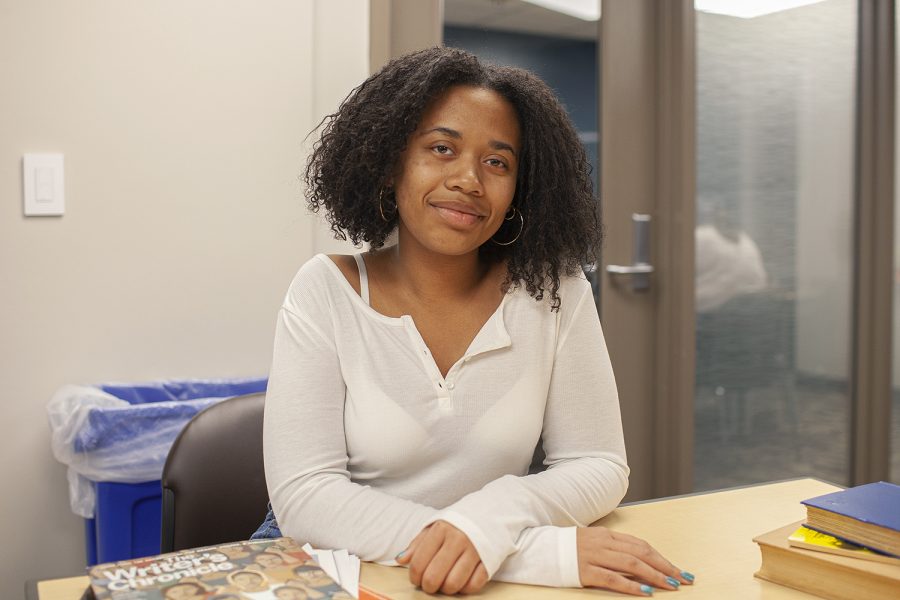 Before coming to the University of Iowa, Sydney Mayes attended the Denver School of the Arts, where she honed her creative-writing skills and found a love for poetry before college. During her first semester at the UI, Mayes continued on that path.

Mayes’ poetry skills, in addition to some design and leadership experience, landed her the position of editor-in-chief of Ink Lit Mag, which is a publication produced by UI first-year students.

“It’s incredible to be surrounded by people who love the art as much as you do,” Mayes said.

Ink Lit Mag showcases all genres of creative writing, but Mayes prefers poetry compared with the rest, in part because poet Langston Hughes is one of her biggest inspirations.

“I think with poetry, you can do so much more with the form,” Mayes said. “Poems center on the moment, whereas a lot of other forms of creative writing focus on a succession of moments. I like the idea of taking the bird’s-eye view.”

Mayes said her time at Ink Lit Mag has not only helped her build her résumé, but has also strengthened her poetry.

The transition from Denver to Iowa City provided Mayes with a new job and team, as well as new subject matters.

“So far, my poetry has changed a lot,” Mayes said. “My work now focuses on what it means to exist in a space, what it means to be gone from home. It’s also got a little more nature-focused. I’ve seen lots of monarchs and bugs that we don’t have back home.”

Mayes said her poetry is often centered around nature and the body.

“I think that the idea of reclaiming what the Earth has given us is very poignant to me,” Mayes said. “And the body, the physicality, the way we move, and what it means to hold all the things we do inside a physical space are concepts that I never get bored of, and I’ve been writing about them since I was very young.”

Although Mayes’ favorite subjects have remained consistent, her style has evolved over time.

“Sometimes, there’s the desire to make it sound pretty and to follow the idea that all poems should sound a certain way,” Mayes said. “Breaking form is hard… but I think sometimes getting out of your own head is really all it takes.”

Mayes said she plans to continue writing poetry and hopes to make a career out of it after graduation.

“I want to have my work read in schools, which I think is a very ambitious thing to desire,” Mayes said. “But I want some kid sitting in a classroom one day reading one of my poems to say, ‘This is what I want to be doing,’ because Langston Hughes did that for me. If I could do that to just one kid somewhere, I would achieve every dream I’ve ever had.”