Both the Hawkeyes and the Badgers own a style of play stemming from Hayden Fry’s philosophy, and the physical rivalry will be renewed on Saturday. 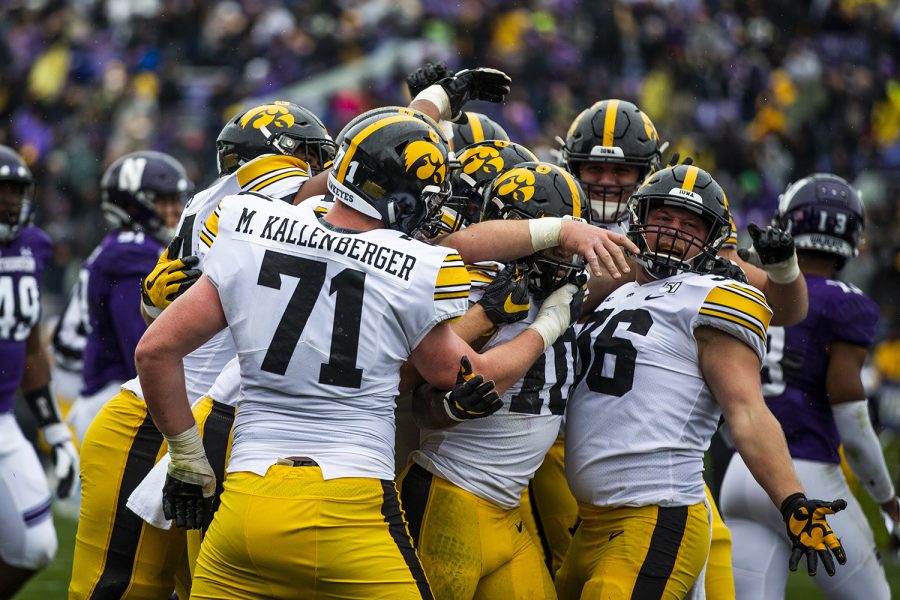 Iowa players celebrate during the Iowa vs. Northwestern football game at Ryan Field on Saturday, October 26, 2019. The Hawkeyes defeated the Wildcats 20-0.

There’s a certain physicality that is expected in a Big Ten football game. Perhaps no other matchup could display that brand of gritty play than Iowa-Wisconsin.

The Hawkeyes and Badgers epitomize Big Ten football. Both programs pride themselves on toughness, for years winning games with dominance at the line of scrimmage and a suffocating defense.

That style of game should carry over into the matchup this weekend.

“We look forward to the games like this,” Iowa linebacker Djimon Colbert said. “Especially the guys up in the front seven, because we know they’re going to come out and run the ball. Linebackers and defensive linemen love games like this. It’s a challenge for all of us. If you’re a competitor, you love the challenge.”

Going back to his days as an assistant in the 1980s, Iowa head coach Kirk Ferentz is well aware of the challenge a team such Wisconsin poses.

The Badger program was elevated, however, when former Iowa assistant coach Barry Alvarez took over as Wisconsin’s head coach. Alvarez went on to coach the Badgers for 16 seasons, compiling a 118-75-4 record and winning three Rose Bowls.

“Barry and I worked together for seven years,” Ferentz said. “And just knowing what I know about Barry and what I know about playing the teams that he was coaching, I think he had a really clear vision of what it takes to be successful, and it really has meshed well there. He felt like Wisconsin was a sleeping giant when he went there, winter of ’89-‘ 90, and I think his words were prophetic that way.”

Alvarez took the style of play he learned under Hayden Fry while at Iowa and turned Wisconsin into a Big Ten power.

“I think the formula is one that’s probably time-tested and probably a little bit of Barry’s DNA as a Nebraska player and then coaching under coach Fry,” Ferentz said. “Playing defense around the football well and being good on the kicking game, those three things, and that’s what you see. You’ve seen it pretty consistently now since Barry went there in 1990.”

Alvarez now serves as Athletics Director at Wisconsin, but the team’s style of play has not changed under current head coach Paul Chryst.

An All-Big Ten caliber running back usually anchors the Badgers, and that is no different this year. The legacy of Ron Dayne, Monte Ball, and Melvin Gordon — among others — is being carried on by Jonathan Taylor.

The challenge the running game will pose to the Hawkeye defense means practices have been more intense this week. As a defensive player, live tackling in practice is something to look forward to.

“I think that’s something we all take pride in is being the most physical defense we can be,” defensive back Jack Koerner said. “That’s something we replicate in practice, too, and it carries over into games.”