Freshman Millie Sansome and senior Hannah Burvill have each had an impressive start to the season, but they have more in common than just winning races in black and gold. 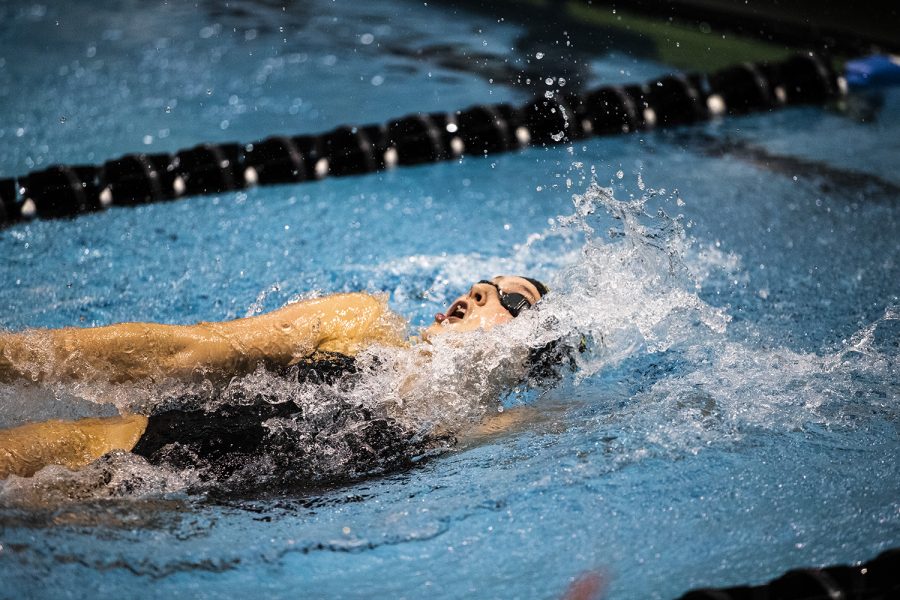 Both freshman Millie Sansome and senior Hannah Burvill have been near the top of the leaderboard in almost all of their dual meet races so far this season, but that’s not all that the two Hawkeye standouts have in common.

The swimmers grew up less than 30 miles from each other: Sansome from Marlow, England, and Burvill from Pyrford, Great Britain. They each were stars, competing in numerous national junior events before making the trip to the states.

“It’s been quite funny because we’re both from a similar area in England so we’ve kind of bonded over funny sayings that people don’t normally get here,” Burvill said. “We’ve been joking around in the locker rooms a lot.”

Although the two had never met before coming to Iowa, they had seen each other race back in England and Burvill’s success in Iowa City played a role in Sansome choosing Iowa. Sansome is grateful to have Burvill to help her adjust to being so far from where she grew up.

“Because we’re so far from home, it’s nice that there are some things that we can both relate about, some topics or swimming back in England we’ll be able to talk about, but, yeah, it’s really lovely,” Sansome said.

Sansome swims more long-distance events and Burvill usually competes in the shorter races, but the two have been teamed together on multiple occasions for relays, showing a team-first mindset.

“One great thing about both of them is they’re willing to race in anything that can help the team,” head coach Marc Long said. “I think Hannah will be a good mentor for Millie, but Millie is her own person and will create her own path here, as well.”

Despite the fact that Sansome and Burvill swim different races for the most part, the senior helps the freshman along whenever Sansome asks for advice.

“Every now and again, if she’s asked for specific help, especially with school, I know that the transition between doing school in the U.K. versus school here is a little different. I’ve tried to be as helpful as I can there,” Burvill said.

Both swimmers will be in action tomorrow at 2 p.m at the Campus Recreation and Wellness Center when the women’s team takes on Rutgers to competing for their second Big Ten win of the season.

The women’s team currently stands at 2-2 with wins over Michigan State and Northern Iowa and losses to Minnesota and Michigan, two teams ranked in the nation’s top 25.