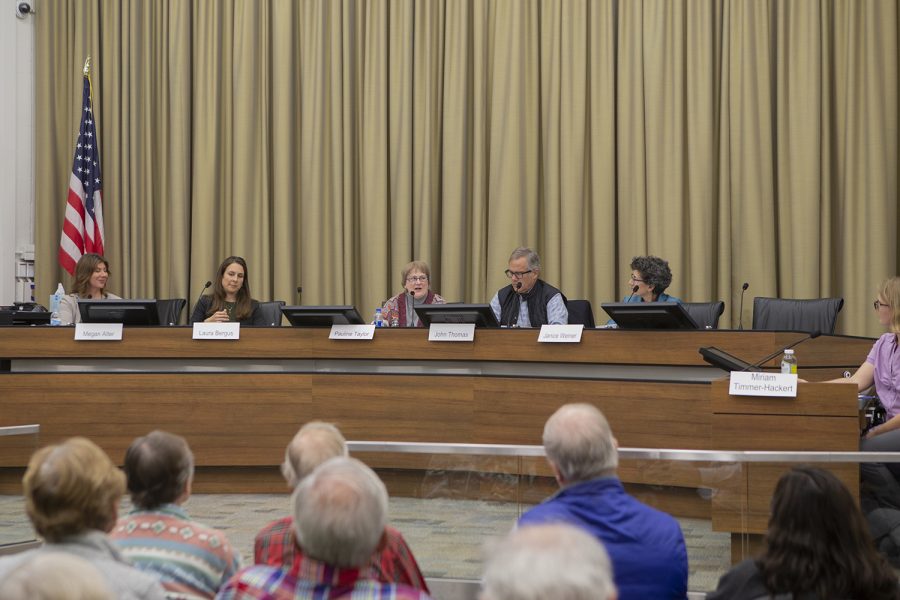 As local elections take place across the nation Today, Johnson County officials are optimistic that voter turnout will be high based on the elevated number of early voters and an increased number of young voters in recent years.

Johnson County Auditor Travis Weipert collects voter-turnout data during election season. In an email to The Daily Iowan, he said 2,000 residents have already registered their votes in early voting.

Weipert said more than 3,000 early-voting ballots were requested this election season and almost 2,500 were returned by Monday morning.

Each at-large candidate has expressed a desire to address issues such as climate change; affordable housing; and diversity, equity, and inclusion initiatives.

School board candidates have said they are fighting for better ethics, transparency, expanded programming, and more within the Iowa City Community School District.

All three women running for the two at-large City Council seats said in previous interviews with the DI that they strongly encourage the populous college community to vote in local elections.

The UI began issuing temporary and free Iowa One cards last week, which have an expiration date to meet state requirements at the poll. The temporary IDs are part of an effort to accommodate students who may not have valid identification to bring to the polls, UI Student Government Governmental Relations Director Connor Wooff said.

The conversation between university administration, UISG, and various other student organizations about whether or not student IDs can be used at the polls is  ongoing, Wooff said, but the temporary IDs are an easy solution for the Iowa One Card office to allow student access to the polls by Election Day.

Hawk the Vote Executive Director Jocelyn Roof said she hopes student organizations and university administration can work more closely in the future to market the temporary IDs sooner than a week before Election Day Roof said. She has low expectations for student-usage rate this year for that reason.

“We’re hoping it’s one more method of identification that students can use,” Roof said. “We’ll figure out how to streamline messaging of it, as well. I think voter ID can be very confusing — we want it to be as simple as possible.”

Her organization often runs into trouble trying to explain to students what to bring to the polls, Roof said, so if students could ultimately use their school IDs, it may be easier and make a big difference in youth voter turnout.

“It’s a larger educational issue, and it’s one that we’ve really been trying to figure out,” Roof said. “I just really empathize with students who are confused about what to bring to the polls. And sometimes it takes intentional conversations to get students to understand what is … and what’s not acceptable.”

Wooff added that UISG, the UI, and others are trying to ensure the best action for their campus. What worked at Iowa State University — adding expiration dates to their pre-existing, permanent student IDs — may not be the right fit for the UI, even though many students are pushing for similar change, he said.

ISU identification cards have an expiration date that simply says “none,” Wooff said, to qualify for the polls. The functionality of this on the UI campus is difficult to impose, because the administration cannot necessarily specify how long a student or staff member will be present on campus, he said.

A student must have additional background documentation or another ID to obtain an Iowa One Card anyway, Wooff said. Therefore, the temporary IDs will likely be used by students whose state driver’s license is either lost or expired, Wooff said.

“I think it’s a great thing that we have it. We want to make sure that everyone’s covered,” Wooff said. “It’s not going to solve our issue, but it’s just making sure that there isn’t going to be a huge hole [in voter representation Tuesday].”

Roof added that the logistics of adding “none” to student IDs, like ISU, or leaving an expiration date off the student ID, like the UI, effectively accomplish the same purpose. She said the state recognizing a difference between the IDs where there isn’t one is disenfranchising to young people.

“You’re asking for a word to be printed on an ID to count,” Roof said. “This is definitely not to be political. It’s disenfranchising Republicans and Democrats alike. It’s harder for students to vote because of something like this.”

Hawk the Vote said in a statement that the issues local-government officials will influence directly affect UI students, including climate change, affordable housing, and transportation. It is crucial that student voices are heard in this election cycle, the organization said.

Voter turnout has slowly declined in local elections over a span of nearly 50 years, Weipert said.

In the Iowa City local governmental elections in 2015, 15.2 percent of the 45,000 registered voters turned out at the polls — a total of approximately 6,800 voters, according to Johnson County numbers.

With social media and the digital age, information about local elections is vast and easier to find compared to earlier election cycles, Weipert said.

“At the University of Iowa, we celebrate civic engagement and democracy,” Hawk the Vote said in its statement. “Our goal is to increase the number of students who vote, educate the community about how to vote, and foster a campus culture of civic engagement.”

In the weeks leading up to local elections, Hawk the Vote hosted a series of events that encouraged students to go to the polls and educated them on how to do so. The organization hosted forums with City Council candidates on campus to inform UI students about how the issues these candidates discuss can affect the college community.

As previously reported by the DI, voter turnout increased by 16 percent on the UI campus in approximately four years. In 2014, around 28.9 percent of students turned out to vote in elections — a number that increased to 44.9 percent by 2018.

“Get out there and vote,” Roof said. “Don’t let anything hold you back.”