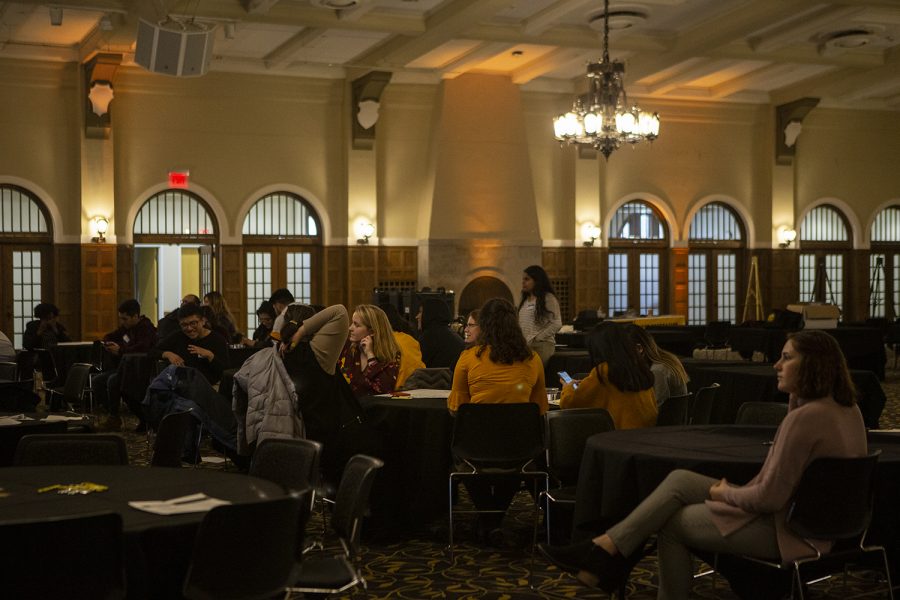 Attendees sit at the First Gen Summit in the Main Lounge of the IMU on Sunday, November 3, 2019.

As a University of Iowa sophomore and first-generation college student, Kayla Nguyen experiences campus life much differently than many of her peers.

Most students have close friends or family to turn to with questions regarding college basics, Nguyen said, but for the first college attendee in a family, figuring out classes, financial decisions, and housing is often a solo experience.

“Sometimes the hardest part of being a first-gen student is not getting recognized for how difficult college can be, because when I accomplish something, I am the only one who understands what actually went into succeeding,” Nguyen said.

University of Iowa Student Government and the First-Generation Task Force collaborated to host their third annual first-generation summit on Sunday, titled “I’m The First.” The events kicked off with a student panel, where Nguyen shared her story, and attendees were encouraged to participate in various activities before the day’s end.

According to summit organizers, the UI defines a first-generation student as any student who doesn’t have a parent or guardian that received a four-year degree.

Lamb said she has a passion for college readiness and helping first-year students. This is the third year that student government hosted the summit, she said, but the first time the event has been held in the fall instead of the spring — a change that opened up the event to kickstart the first-generation celebration week on campus.

Throughout this week, Lamb said events across campus will celebrate the first-generation identity and will close with an awards ceremony recognizing a few successful first-generation students on the official national celebration day, Nov. 8.

Also new this year is a portion of the summit dedicated to breaking out attendees into small groups to discuss resources and experience with peers, Lamb added.

During the panel, three undergraduate students and one graduate student discussed the reality of being a first-generation student and offered advice to onlooking students in a question-and-answer.

UI sophomore and first-generation student Chris Vazquez said during the panel that networking and connecting with people on campus is one of the greatest resources available to him, because it offers a consistent support system that he can turn to.

“Being a first-generation student, you don’t know what to expect, and you don’t know who to turn to for help,” Vazquez said. “Acclimating to school means having to handle things and figure things out myself.”

As a college student, and especially a first-generation student, life can become stressful and overwhelming at times, Vazquez said. He believes that everyone should remember to take care of themselves and find the right community to do so and use one another as resources.

Lamb said the UI First-Generation Task Force aims to help students find an outlet for their identity as first-generation. Historically, university completion and retention rates are lower in first-generation students, and the organization wants to figure out how to help those numbers, she said.

“These students experience college different[ly] and being a first-generation student should not be seen as a deficit; it should be celebrated,” Lamb said. “We do not only increase awareness but encourage a celebratory attitude.”

Nguyen said she had to step far out of her comfort zone to make a life at the university.

“There is a constant learning experience everyday — especially when you are in a new environment,” Nguyen said. “Anxiety comes when I finally grasp a new concept and my parents don’t understand the extent of my accomplishments, but there is a lot of gratification to learning something on your own.”