Nicholas Meyer, author of The Seven Percent Solution and director and writer of Star Trek II: The Wrath of Khan returned to share an excerpt from his latest Sherlock Holmes book, The Adventure of Peculiar Protocols. 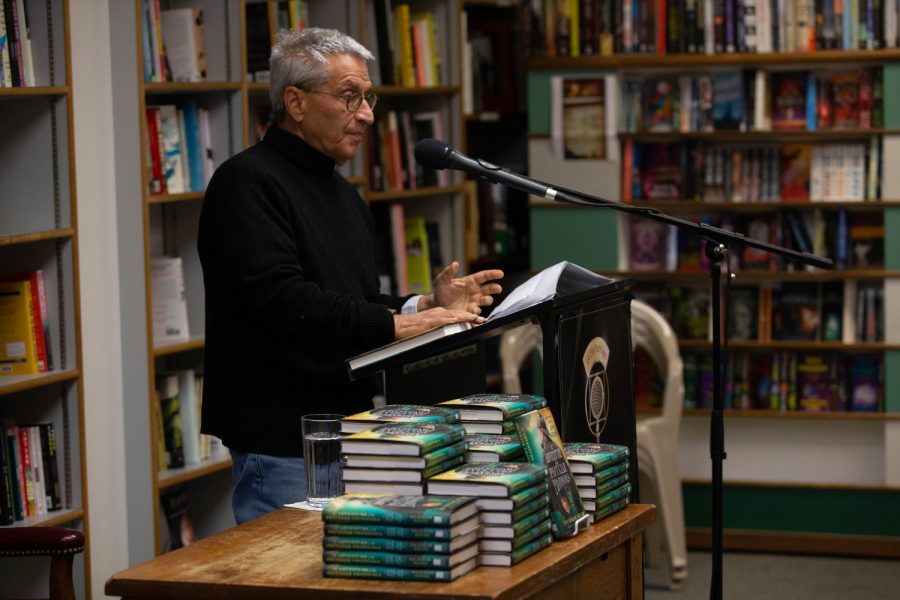 Novelist and University of Iowa alumnus during a reading on Tuesday, Oct. 29, 2019. Meyer has written three other Sherlock Holmes novels, including Seven-per-cent-solution, which was a best seller.

A University of Iowa alum, Meyer majored in theater arts and filmmaking in the 60’s. During his time at the UI, he wrote 400 film reviews for The Daily Iowan as an arts reporter.

With a decorated array of work in literature, film, and television, Meyer has written the best-selling Sherlock Holmes sequel, The Seven-Per-Cent Solution, which he adapted into a screenplay that earned him an Oscar nomination. Meyer is also recognized for directing and writing the sequel, Star Trek II: The Wrath of Khan, adapting two Philip Roth novels into films, and directing the highest rated television film, The Day After, which he considers to be his proudest work for its influence over the Reagan administration.

During his visit, Meyer spoke on his most recent work. Not being the only one to write a story based off of Arthur Conan Doyle’s detective, Meyer spoke about what separates his Sherlock Holmes from those of other adaptations.

“I hate most Sherlock Holmes movies,” Meyer said. “They’re so far off from what I consider the mark. I like The Seven-Per-Cent Solution, the movie I wrote, but I can criticize it as well. The movies seem to always make it camp, and I never saw Conan-Doyle as camp.”

Meyer also spoke about where he drew inspiration from for his work. Despite his experience in both areas, he said many of his influences for his work did not come from novels or films.

Meyer made his first stop in Iowa City at the Iowa Memorial Union to have a coffee break with UI students for a Q&A. The meet was set up by the Theater Department in collaboration with the Center for Advancement. Daniel Khalatschi, director of the Magid Center for Undergraduate Writing, moderated the event.

“Having the opportunity to host a Q&A for undergraduates given by someone like Mr. Meyer, whose expansive career is inspiring, underscores our mission to provide students of all academic and creative backgrounds the chance to have experiences they simply can’t find at other universities,” Khalatschi said.

Meyer later made a second appearance at Prairie Lights. Event Coordinator Kathleen Johnson said she was eager for Meyer’s return to the bookstore.

“It’s exciting for us to get an Academy Award-nominated scriptwriter and Emmy winner to come back to Prairie Lights. Our customers are quite excited for his latest Sherlock Holmes venture,” Johnson said.

During the IMU coffee break, Meyer advised students to follow their stories rather than attaching themselves to the expectations of the audience.

“I never thought about anybody but myself when it comes to creating,” Meyer said. “I can’t tell you a joke that I don’t find funny on the off chance that you might laugh, on the off chance that you might find it funny. It doesn’t make sense to me. If you’re not going to do it your way, then move over and let someone else try it their way. If you just want to be like everyone else, then you’re just manufacturing cafeteria food.”