Black curators discuss ‘insiders and outsiders’ in the art world 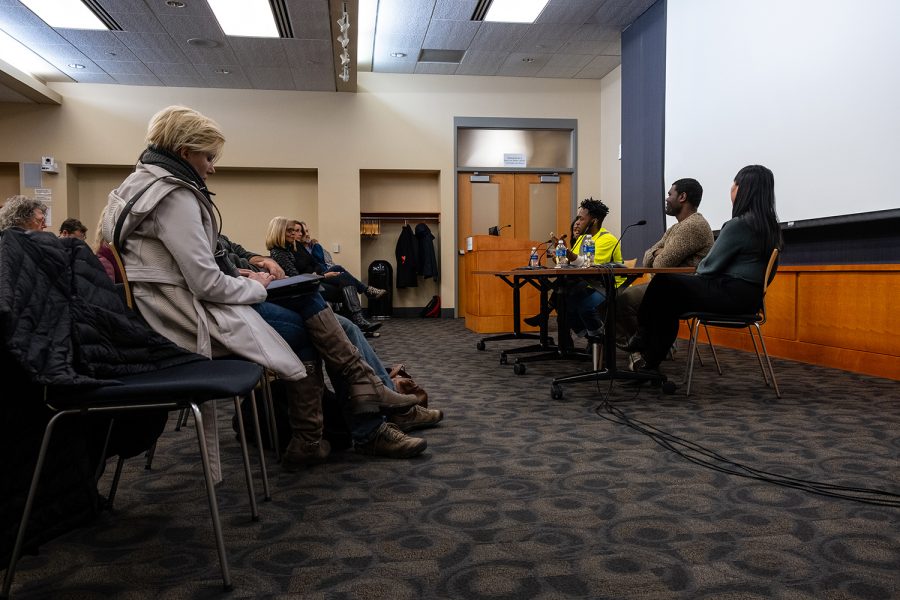 Program Manager of Recess and founding curator of the Center for Afrofuturist Studies Anaïs Duplan answers a question from the audience during the Black Curators Roundtable forum at the Iowa City Public Library on Monday, October 28, 2019. The forum is part of the exhibition “Anonymous Donor” guest curated by Duplan and exhibited at the Figge Art Museum, facilitated by the Stanley Museum of Art.

Three black curators — Anaïs Duplan, Eileen Isagon Skyers, and Gee Wesley — sat at the front of a crowded room in the Iowa City Public Library as a group of Iowa City residents took shelter from the first snow of the year in the room where the Black Curators Roundtable took place Monday night.

New York-based trans curator, poet, and artist Duplan works exclusively with black artists in his curatorial work. He is a co-founder of the Center for Afrofuturist Studies, which co-sponsored Monday’s event with the University of Iowa Stanley Museum of Art. Duplan is also an alumnus of the Iowa Writer Workshop.

Duplan discussed tropes within the art community and how each play into the view of race in the art world.

“What would it be like to create a space where black artists were allowed to be naughty, as it were, and really imagine something new?” Duplan asked.

During the roundtable, Duplan touched on his own experiences as a black trans man in the art world — which he said is generally centered around straight, white, male art and artists.

Duplan made the distinction between “insider artists” and “outsider artists,” asking the audience to consider the difference between the two. He questioned what propels an artist “in the margins” versus “in the mainstream.”

“A lot of the time, outsider artists are artists who don’t have traditional arts training and aren’t at play in the art world in a way that would make them an insider artist,” Duplan said.

According to a study by BFAMFAPhD, a cultural equity advocacy group, 80.8 percent of artists that receive their primary income from the arts are white.

Wesley agreed with Duplan’s ideas, adding that he believes it’s important to challenge the narratives that exist about certain geographies.

“I’m attentive to the ways that contemporary narratives that exist about the Midwest, and this region involves a lot of forgetting about the fundamental nature of black experience and black artistic production,” Wesley said.

Wesley continued to discuss what he referred to as “an archive of disappearance” in black art. He asked attendees what it means to understand that someone’s existence, and history may only exist as a name on a slave ship ledger or promissory note.

“Blackness represents this kind of fundamental collection of threads about how the American experience has been shaped,” Wesley said. “Any narrative about human experience in the United States that tries to grapple with and address Americanness and what contemporaneity is, is incomplete without the inclusion of the black narrative.”

Skyers agreed with Duplan and Wesley, adding that conversations like that of the roundtable are imperative to education about contemporary black creation.

“They serve to center black contemporary art in a way that is often taken for granted when it comes to discussions of art at large,” Skyers said.

In an email to The Daily Iowan, Stanley Museum of Art Director Lauren Lessing emphasized the relevance of the roundtable event in the Iowa City community.

“As we prepare to re-open the UI Stanley Museum of Art in its new building, it’s a good time to think about the decisions that curators make and discuss how these decisions affect how we see and understand works of art,” Lessing said. “I thought the question of how institutions define insiders and outsiders was particularly relevant.”