For the second game in a row, the forward scored the game-winning goal with only seconds to go in double overtime, giving the Hawkeyes their 15th win of the season in the regular season finale. 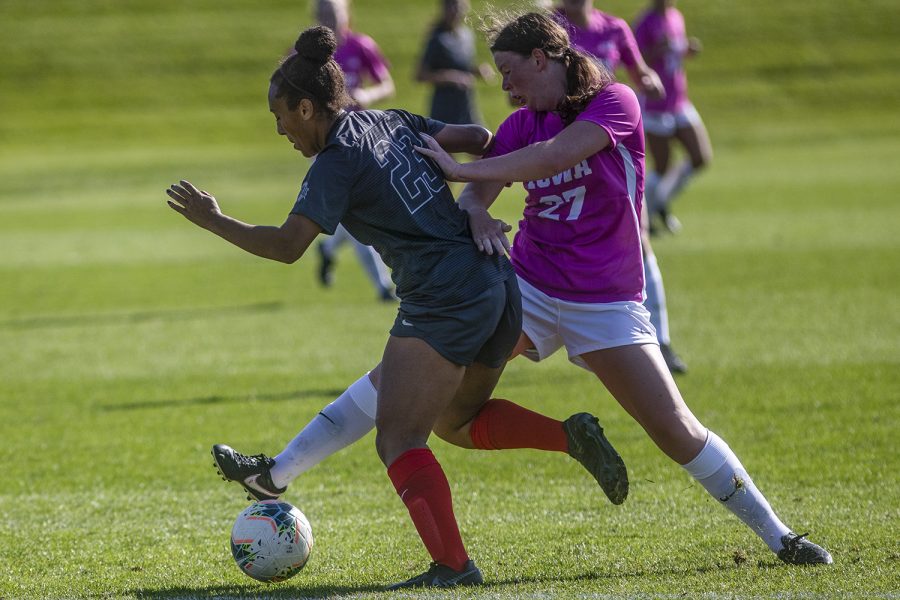 Thought sophomore forward Samantha Tawharu game-winning goal last week against Minnesota would be as good as it gets? After all, she scored with only 22 seconds left in double overtime.

In Iowa soccer’s final regular season game against Ohio State, Tawharu topped her previous performance. With only seven seconds left on the clock in double overtime and the game tied, 1-1, she scored the game winning goal to give Iowa its program best-tying 15th win of the season.

The goal came after a sophomore defender Sara Wheaton pushed the ball from near the left corner of the field to Tawharu, who was standing in the middle of the box waiting to strike the golden goal.

“I just knew it was coming in from across,” Tawharu said. “I saw the [Buckeye] defender was going up for it, but you can never count on that they’re definitely going to get a hit on it, so I just counted that she was going to miss it, and thankfully she did, and I brought it down and had a good shot.”

Wheaton gave her perspective on the goal.

“I looked at the clock when we got the corner kick, and there was 50 seconds left, so I told Riley [Whitaker], ‘Hey, just calm down, give us a good kick, we got to get a chance here,’” Wheaton said. “The ball got flick — and my job is to not keep the ball in the box whatever I do — so I got flick, and I was like, I got to sprint out there and get it. I served in, and Sammy was in a perfect spot. That’s something this team does so well … we never stop, and it’s amazing.”

Freshman forward Gianna Gourley fired the first goal of the game into the left side of the net to put Iowa up 1-0 in the 65th minute.

Thirteen minutes later, sophomore forward Kayla Fischer tied up the game for the Buckeyes as she kicked the ball over senior goalkeeper Claire Graves.

“[This team] is a very resilient group,” head coach Dave DiIanni said. “That’s actually one of our core values is being resilient. What a season this group as had. We really just wanted to finish the Big Ten season as strong as we could, regardless of what seed we end up in.”