Groove-pop and saxophone solos: The Violet Nines at the Yacht Club

Groove-pop band The Violet Nines opened at the Yacht Club for Undercover Organism on Saturday, Oct. 26. 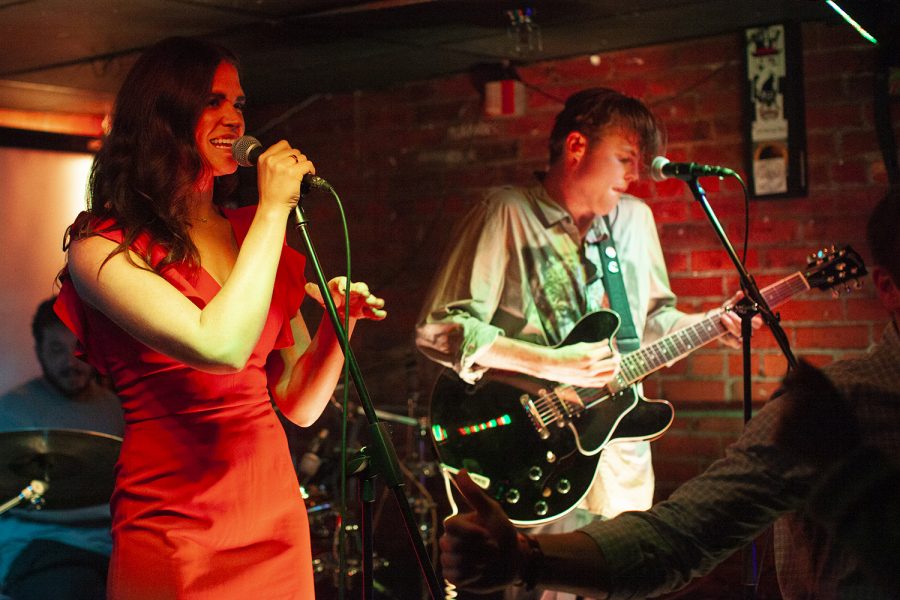 The Violeet Nines perform during a show at Yacht Club on Saturday, Oct. 26, 2019. The Violet Nines, based out of Minneapolis, have been together since 2017.

For someone looking for an energetic, interactive live music experience on Saturday night, the Yacht Club with opening act The Violet Nines was the place to be.

“We started saying we’re groove-pop, because we’re kinda groovy, but it’s pop,” said Eagon, guitarist and vocalist, in an interview following their set. “That’ll get ‘em in the door.”

The Violet Nines dressed casually, aside from Fritsch, the front vocalist, who wore a mid-thigh, bright red cocktail dress. Elmeer, bassist and vocalist, was rocking his signature round sunglasses.

The energy was already high in the space, but it only rose higher. Between songs, audience members were shown the complete support each member had for one another as they danced and smiled at each other, cheering them on through solos.

The Violet Nines didn’t just reach the expectations that the crowd had — they highly exceeded them. Cline left the stage multiple times, still playing his saxophone, to run around the floor and dance with the crowd. Audience members screamed with excitement with every direct interaction The Violet Nines had with them, whether it included dancing within them, shouting out a fans’ Twitter handle, conversing with the audience, or complimenting them.

Related: From the Appalachian Mountains to the Midwest: William and the Wildflowers performs at Yacht Club

“I like Iowa. Y’all are very lively,” said O’SAY, vocalist and keyboard player.

As the crowd’s energy grew, so did The Violet Nines, and Eagon’s energy was no exception. While rocking out during one of his many solos, his glasses flew off of his face, yet he played it off and ran the glasses down the strings of his guitar.

The Violet Nines did both covers of songs and originals such as “Cloud 9,” from their Cloud 9 EP.

They ended their concert with a variation of their song, “Day Job,” the first track they ever recorded as The Violet Nines. The song slowly morphed into Simple Minds’ “Don’t You (Forget About Me),” and back again.

Following the concert, The Violet Nines cleaned up the stage and socialized with audience members, thanking them for their attendance and chatting with them.

Despite the small turnout at the Yacht Club, The Violet Nines have big plans for shows. They will be performing at First Avenue in downtown Minneapolis, the city where band originated, on Nov. 27.

“It hasn’t happened yet, but I would say our biggest achievement is booking First Ave,” said Fritsch.

The Violet Nines have long-term goals to go on tour around the world, including two weeks in Europe, and the members have a sure-fire way to reach their goals. Cline’s advice for success is simple.

“Become amazing, and make sure people know it,” he said with a smile.