Once again, the Hawkeye defense led the way for Iowa, as it shut Northwestern out 20-0 on Saturday. 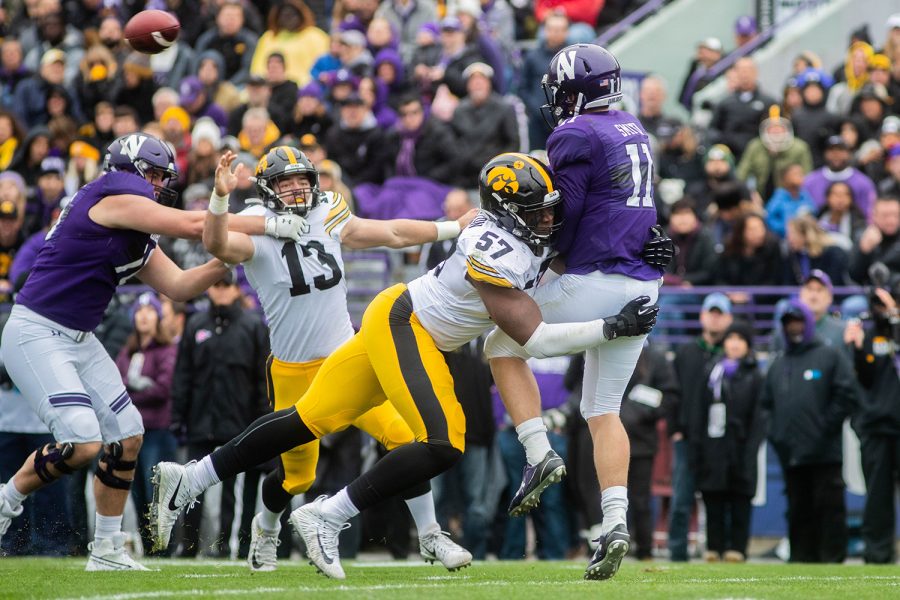 Iowa defensive end Chauncey Golston tackles Northwestern quarter back Aidan Smith during a game against Northwestern at Ryan Field on Saturday, October 26, 2019. The Hawkeyes defeated the Wildcats 20-0. The Hawkeyes had a total of 63 tackles.

Iowa’s offensive performance was highlighted by a 50-yard touchdown pass from Nate Stanley to Tyrone Tracy in which Tracy slipped out of a tackle and outran the Wildcat defense for the first points of the game.

Iowa’s run game couldn’t get going in the first half until Tyler Goodson put up 48 yards on eight carries on the Hawkeyes’ first drive of the third quarter.

It was also Stanley’s first game without an interception since Sept. 28.

Another week, another stellar performance from the Hawkeye defense.

Iowa didn’t stoop down to Northwestern’s poor level of play, keeping the Wildcats off the board all game.

The Hawkeyes held the Wildcats to just 202 total yards — 138 through the air and 64 on the ground.

Iowa also recorded a turnover with a Chauncey Golston interception on a tipped Aidan Smith pass in the first quarter.

It feels like it’s been a long time since Iowa’s offense has matched its level of play on special teams, but it happened against the Wildcats.

It wasn’t the cleanest day in the third phase for the Hawkeyes, but it could have been worse.

Keith Duncan missed his first field goal attempt in the first quarter, but he hit two later in the game to boost the lead the Hawkeyes built.

The only other downfall was a questionable fair catch by Max Cooper on a punt return, but overall, it ended up being a solid day for Iowa’s special teams.