The third iteration of Short’s Burger & Shine has opened outside of the Iowa City area in Marion. For co-owner Chevy Bushaw, the burger joint is a “labor of love.” 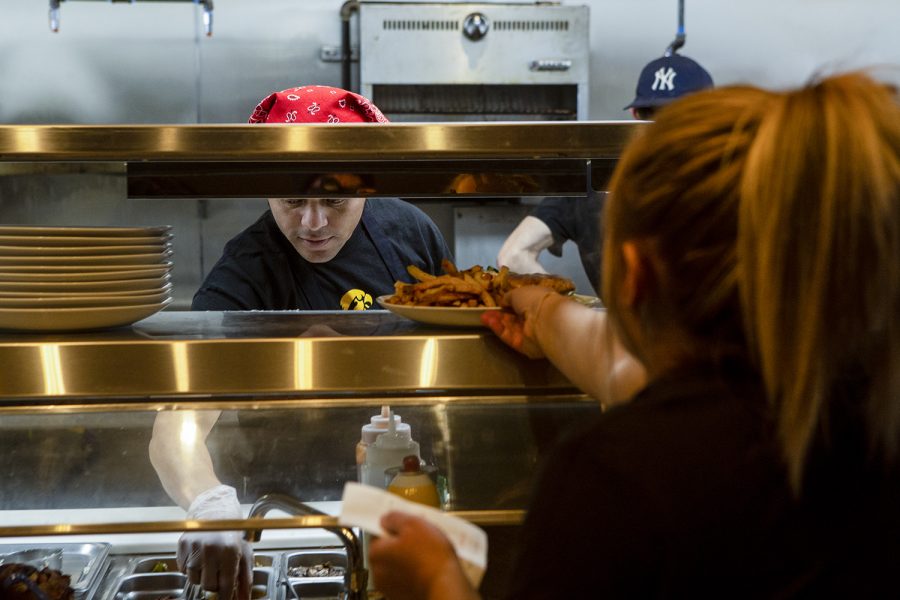 A server retrieves a dish from the kitchen at the Marion location of Short’s Burgers & Shine on Thursday, Oct. 24 2019. This is the first Short’s location outside of the Iowa City area.

Flaunting exposed brick, Edison bulbs, and a variety of local beers — not to mention mouth-watering portions of local beef — Iowa City Short’s Burger & Shine has expanded outside the friendly confines of the Hawkeyes’ hometown.

Although the new Marion location — the fifth restaurant managed by the Short’s group — has only been open since Oct. 10, co-owner Chevy Bushaw said there has already been an “incredible” reaction from Iowa natives and visitors alike.

“It has been a crazy few weeks, that’s for sure,” Bushaw said. “The day we opened, an hour before we started serving customers, the fire alarms went off … luckily the fire department just had to reset them, but that was just the calm before the storm.”

The aforementioned storm manifested itself, Bushaw said, in a never-ending stream of burger-lovers, who have the option of ordering Short’s favorites or trying something new — dishes that are more easily prepared in a larger kitchen, Bushaw added.

“In our downtown [Iowa City] location, we stick to the classics,” he said. “But here, we can add more menu items and have a more fleshed-out selection.”

Apart from the burgers, fries, and local beer, Bushaw said there are many aspects to opening a restaurant that many people may not realize. The exposed wood booths, for example, were hand-built by Bushaw and co-owner Kevin Perez.

“It was labor-intensive to create the aesthetic of this location. We wanted to keep the décor simple, inviting, and warm but allow our food to be the star of the show,” he said. “There is a lot of behind-the-scenes work you have to do as the owner of a smaller chain.”

Even before Bushaw sat down with The Daily Iowan, he ran to the bank, installed a software update to the point of sale system and utilized a bar stool to adjust a hard-to-reach light fixture — and this was only 10 minutes after opening.

Despite the demands of the job, Bushaw said it has been a rewarding process. As a new staff becomes acclimated to the space, menu, and the ins-and-outs of the burger business, Bushaw said he is looking forward to the kitchen operating more efficiently, further alterations to the menu, and an expanded clientele in Cedar Rapids’ sister city.

Assistant Manager Kylee Howell said she was an “avid regular” at Stella Iowa City long before her fiancé introduced her to Bushaw. Since then, she has worked for the chain and said she was excited to accept a position at the new location.

“I feel like the people in Marion have been waiting for a place like this,” she said. “People I have talked to have been excited about Shorts expanding outside of Iowa City.”