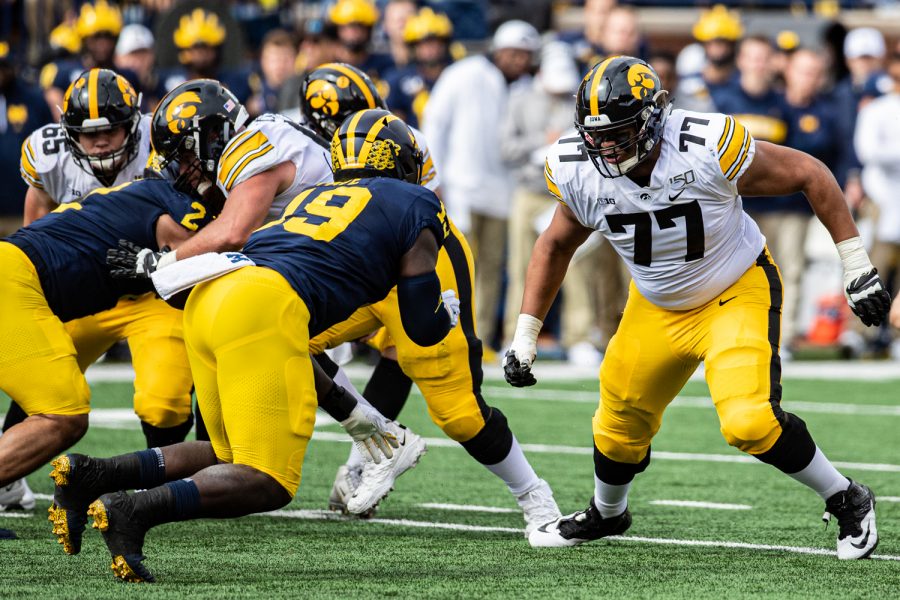 Iowa offensive lineman Alaric Jackson prepares to block during a football game between Iowa and Michigan in Ann Arbor on Saturday, October 5, 2019.

The Daily Iowan: If you could listen to one music artist for the rest of your life, who would you choose?Alaric Jackson: Drake. I was born in Canada

DI: What’s the best Halloween costume you’ve ever worn?
Jackson: I was a zombie in, like, the fifth grade. I had all the makeup done and the little things, the little guts out.

DI: If you could live in another country for a year, where would you choose?
Jackson: I’m going back home to Canada. No brainer.

DI: What’s the best part?
Jackson: Just having fun with my teammates pretty much. Going out there playing with those guys.

DI: What’s your favorite alternate uniform that you’ve worn?
Jackson: It would have to be Ohio State. We blew Ohio State out, we looked good, played good.

DI: Growing up in Canada, did you have a favorite NFL team?
Jackson: No, I wasn’t a big football fan. [I was] a basketball fan growing up.

DI: Raptors fan?
Jackson: No, Pistons fan actually. My dad’s from Detroit, so I just go back and forth from Canada to Detroit.

DI: What’s your most memorable game?
Jackson: Most memorable game here would have to be Ohio State. True freshman year starting, playing some key guys like Sam Hubbard and Nick Bosa. Tough task at hand; me and Wirfs handled it pretty well.