Meet Peggy Nopoulos, the first woman to chair the UI Department of Psychiatry

The Department of Psychiatry has appointed Peggy Nopoulos Departmental Executive Officer. Nopoulos is the department’s first female chair, and she is passionate about encouraging women in the medical field. 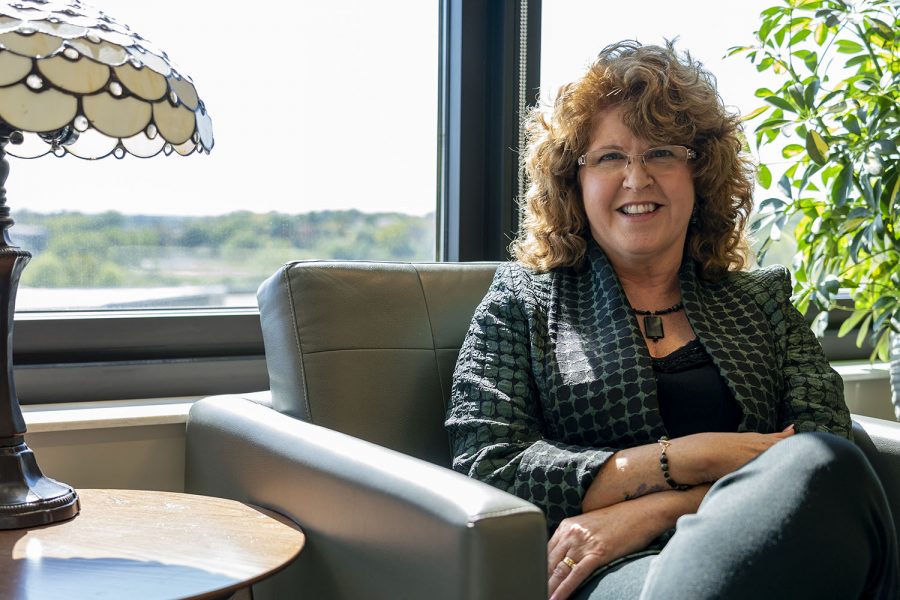 University of Iowa new DEO and first female chair in the college of Psychiatry, Peggy Nopoulos poses for a portrait on Monday October 7, 2019.

The University of Iowa has assigned its first female chair of the Psychiatry Department with the appointment of Peggy Nopoulos.

Nopoulos became department executive officer in July 2018 after being in the position on an interim basis. The department chair position now gives her the responsibility of overseeing 90 faculty and more than 300 staff.

The Iowa native’s research focuses on single gene disorders through degenerative diseases such as Parkinson’s and myotonic dystrophy, and her team is just now beginning to work on gene studies.

Nopoulos has been connected to the UI since completing her undergraduate general science degree at the university. From there she went on to medical school and residency at the UI.

If given the opportunity to leave the UI for any other program, Nopoulos said she would stay because the university offers a learning and teaching environment that is unique and makes a real difference.

“Iowa City [is] my home, and it has world-class resources for science and a culture for collaboration. I couldn’t see myself anywhere else,” Nopoulos said.

Nopoulos said she appreciates how interconnected the University of Iowa Hospitals and Clinics system is throughout departments as well as within the psychiatry department.

As a woman in medicine, Nopoulos said it is important that women are supported and encouraged, because they are often marginalized in leadership positions and are rarities in science and medical fields.

Nopoulos was always supported by those around her throughout her education and career, but she considers herself lucky because many women don’t have access to the same environment.

Women currently make up 34 percent of U.S. psychiatrists and are often discouraged from joining the medical field, Nopoulos said.

“Sometimes I worry about downplaying the fact of being the first female chair. We are very desensitized to how much women in our society continue to be marginalized, underpaid, and underappreciated,” Nopoulos said.

Tina Cronbaugh, administrative services coordinator in the psychiatry department, said that Nopoulos shows initiative and is a positive influence in the department through her passion and hard work.

“Dr. Nopoulos is great to work with.  Her spark and take-charge attitude really set a positive tone around the department,” Cronbough said.

Kimberly Hart, a clinical psychologist at UIHC, said she has a lot of respect for Nopoulos and that she is an outstanding leader.

“Dr. Nopoulos is a strong advocate for women in academic health care and science. With her substantial involvement in clinical care, education, and research, she serves as an excellent role model for women in academia. Her warmth, compassion, and genuine kindness create an environment of collegiality and respect,” Hart said.

Nopoulos said her personal goal as chair is to give awareness that people with mental health are constantly disparaged and not given the proper rights or access to care.