Around the Big Ten: Week 9 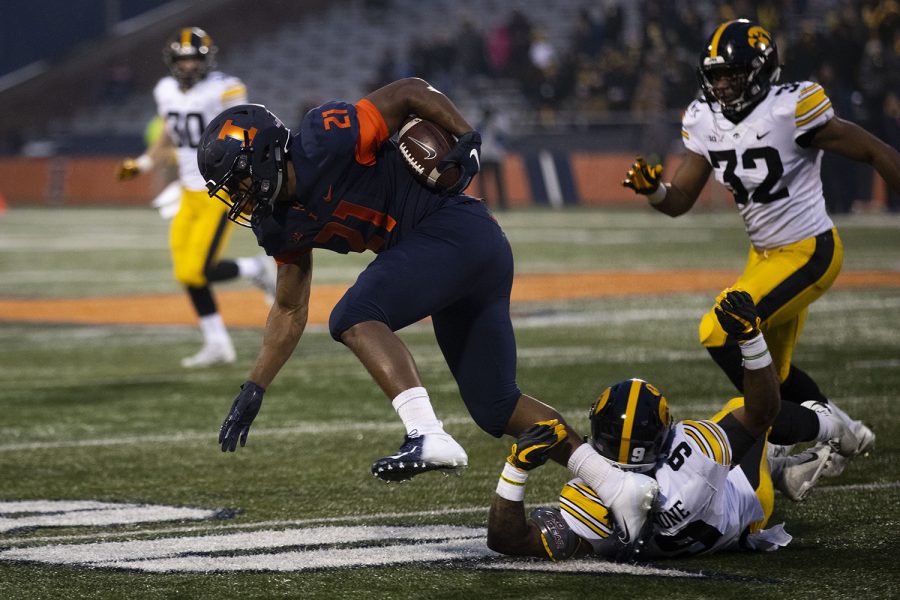 Illinois' RaVon Bonner runs the ball during the Iowa/Illinois football game at Memorial Stadium in Champaign on Saturday, November 17, 2018. The Hawkeyes defeated the Fighting Illini, 63-0, to snap a 3-game losing streak.

Rumor has it, Ohio State is playing the Miami Dolphins next week. If the Dolphins lose, they get relegated to the Big Ten and the Buckeyes take their spot in the AFC East.

This could be a special team.

DYK: Illinois’ Memorial Stadium is the home of the “12th Man,” giving the Illini a significant advantage against top-10 teams at home. Kidding, there were like 100 fans at the game, and Wisconsin still lost.

Still have no idea if the Gophers are good, but Tanner Morgan has already thrown for 16 touchdowns and 1,623 yards this year. Also, they beat Illinois by 23 points, which evidently is an important thing to note now.

In all seriousness, Michigan should get a lot of respect after its gutsy second-half performance against Penn State.

Keith Duncan leads the Big Ten in field goals made by SIX. Very cool, Keith. (But if the offense wants to score some touchdowns, that’s encouraged by many.)

Michigan State should be upset this week because it got shut out by Wisconsin a few weeks ago. Ah, I love basing these rankings off of the competency of Illinois.

Indiana has two-straight conference wins and a chance to stretch that to three with Nebraska this weekend, and it faces Northwestern the week after. It’s extremely possible that the Hoosiers go undefeated in October.

Nebraska, don’t blink, or the team in the spot below you might just pass you.

Give the guy who played “Jump Around” over the Memorial Stadium speakers after Illinois won a huge raise.

Jack Plummer had 50 passing attempts in Purdue’s loss last weekend. Fifty. And he only threw one pick, so be impressed if you want.

The Terps’ leading rusher averaged 6.9 YPC on 23 carries, but they still couldn’t beat a mediocre Indiana team at home. Sorry for the harsh words.

Staying in the same spot in the DI’s Power Rankings is always positive, even if you’re only ahead of Rutgers.

Good week for Rutgers. Nunzio Campanile said their football program isn’t a “morgue” yet, and it went on to score its second touchdown in four Big Ten games.
Big Ten schedule
Illinois vs. Purdue

Wisconsin fans should carry pillows around to scream into just in case Purdue beats Illinois.

No. 20 Iowa vs Northwestern

Iowa is 1-0 on natural grass this year, but apparently Ryan Field’s natural grass is rumored to be the longest in the country. Nate Stanley should wear moon boots.

I love the Big Ten. Top-15 matchups before lunch are my bread and butter.

No. 8 vs. No. 9 in the power rankings, and those are the most exciting games in the NCAA Tournament. So, maybe this will be entertaining at least.

No. 17 Minnesota vs. Maryland

I don’t understand Minnesota, but I know that Maryland is bad.

No. 6 Penn State vs. Michigan State

Don’t take my word for it, but Michigan State is due for a big win this year.

Notre Dame and Michigan at night gives me unnerving flashbacks of Brady Hoke stomping around on the sideline.