Iowa City’s Megan Gogerty is back at Riverside Theater with her latest solo show, Feast. Set at a dinner party, Gogerty seems to be a welcoming host, but not everything is as it seems. 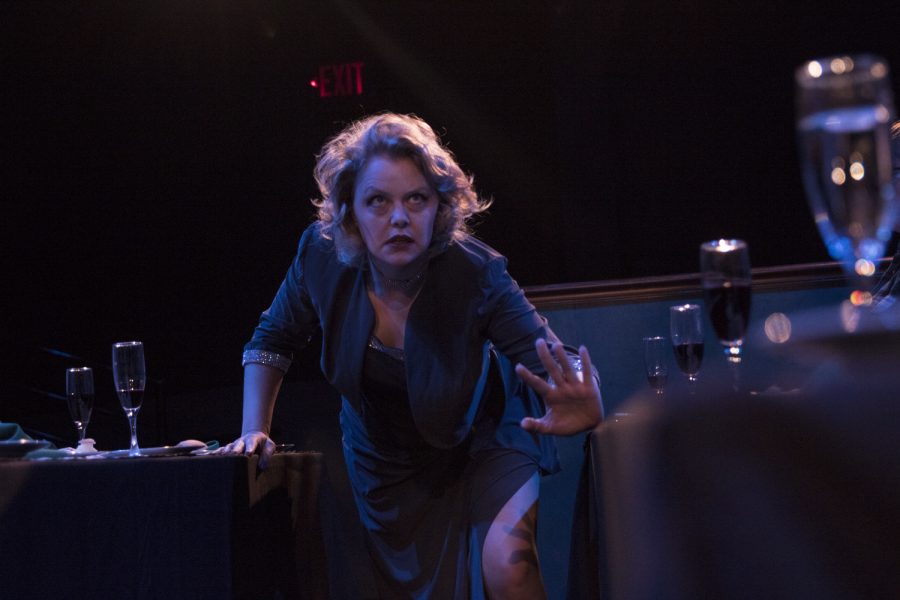 Megan Gogerty rehearses scenes from “Feast” during photo call at Riverside Theater on Tuesday, Oct. 22, 2019. “Feast” is a one-woman show and is interactive with the audience.

From small to large productions, a key point in theater is for cast members to work together in order to construct a fabulous show. For Iowa City playwright, Megan Gogerty, however, there is no need for a large cast, or even a small one — all she needs on the stage is herself.

Starring in her own one-woman show, Gogerty’s Feast will premiere at Riverside Theater at 7:30 p.m. Friday.

Feast is Gogerty’s fifth play to be performed at Riverside. Unlike her past work, Feast is not a comedy, but a horror story.

“It’s a high fantasy epic like Game of Thrones,” Gogerty said. “It’s a political polemic, it’s a meditation on grief and loss. It’s this huge, mythic, giant play that is also a dinner party.”

The show is set around the idea of a dinner party, where the audience plays as the dinner party guests, while Gogerty plays the host. When Gogerty emerges, she’s seen wearing a beautiful dress, giving the audience the impression that she is but a nice lady throwing a dinner party. But this impression of normality is unveiled early on in the show, as Gogerty’s character Agathae is anything but human. 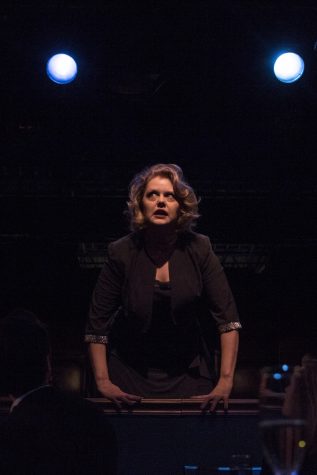 Katie GoodaleMegan Gogerty rehearses scenes from “Feast” during photo call at Riverside Theater on Tuesday, Oct. 22, 2019. “Feast” is a one-woman show and is interactive with the audience.

“She says to the audience, ‘You’ve been invited to this dinner party because we’re at the end of humanity; humanity’s era are coming to a close,” Gogerty said. “So, we’re going to form a truth and reconciliation committee because I was wronged thousands of years ago by your fathers, and we’re going to get to the bottom of it tonight.”

After that piercing statement, her character launches into a story chock full of violence, featuring monsters, swords, and dismemberment. Regardless of the violent storytelling, Gogerty inserts a strong undertone of asking the audience: What is the people’s reaction to the rise of authoritarianism?

“What do you and I do? Just people with like, bills to pay and kids to raise and just [have] a regular life,” Gogerty said. “You know, when the dictator comes to town, what do we do? What is our responsibility to one another? What is our collective response to that?”

The concept of solo shows is not foreign to Gogerty, who has been writing them for herself since her 20s.

“I was writing a lot of solo shows, mostly because I was an actor, and I couldn’t find roles that were for me,” Gogerty said. “So I thought, well, I’ll write my own roles.”

While Gogerty wrote plays for other actors for 10-12 years, her first solo show wasn’t performed until 2008, titled, Hillary Clinton Got Me Pregnant.

Feast director Saffron Henke, a long-time friend of Gogerty, worked with Gogerty on her last solo piece, Lady Macbeth and Her Pal, Megan.

“In terms of directing a solo show, you only have one person to tell the story with,” Henke said. “So really creating the world and the space of the play with that one actor is crucial.”

In the beginning stages of constructing the show, Henke and Gogerty collaborated on the script, revising and rewriting it; the duo is now on the 21st draft. The two eventually started blocking, a theatrical process that focuses on where the actor should be moving in the space.

“Our show is different than a multi-character show,” Henke said. “And really helping the actor tell the arc of the play and keep them grounded in their relationship to the audience as well. And in this play, she’s really talking to the audience a lot. As she’s telling the story, she’s really interacting with us, asking us for things, and I focused on that a lot.”

Gogerty has also worked closely with Adam Knight, the producing artistic director of Riverside, and Chris Rich, the scenic and lighting designer of Feast. In order to create an intimate space in the theater, Rich opened up the stage on its lower level, giving the stage a runway look that conveniently resembles a dinner table.

“The scenic design has the audience on both sides, equally,” Rich said. “And so we get them as close to the dinner table as possible to make it more of an intimate affair.” 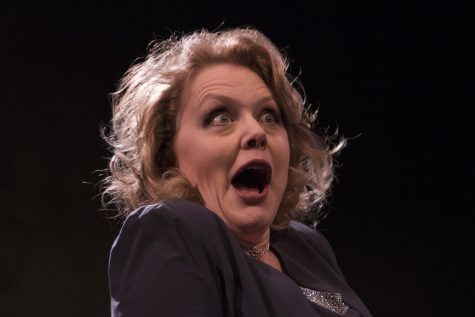 Katie GoodaleMegan Gogerty rehearses scenes from “Feast” during photo call at Riverside Theater on Tuesday, Oct. 22, 2019. “Feast” is a one-woman show and is interactive with the audience.

With the audience on both sides, Gogerty’s character is able to walk among it, because Feast is an interactive show. The lights go down and the action is secluded to the stage, Rich said.

“In most performances we, as [an] audience, can kind of separate from it,” Rich said. “We’re separated from it through the distance and darkness, allowing us to remove ourselves from it. By going runway with the setup, we shorten that aesthetic distance, so that more of the audience is closer to the action than they would be sitting in a normal, proscenium space.”

As the only character of the play, Gogerty has no other actors to bounce off of, which she described as horrible and exhausting, but she said the playing of it is exhilarating.

“Theater doesn’t happen on the stage, theater happens in the minds of the audience,” she said. “It’s all about inviting the audience to imagine something together. So for me, as an actor in a solo show, it doesn’t really get started until the audience comes.”